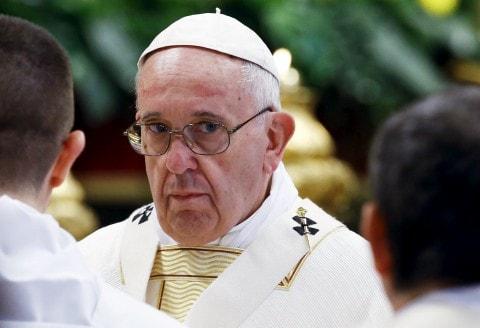 Let's just say it, the Vatican is a disgusting institution and the Catholic Church is a demonic entity that molests more children than they help.

There's really no way around it anymore, if you still identify as a Catholic after decades of abuse has come to light then I question your own motives. I'll be blunt, Catholicism has been taken over by the Synagogue of Satanic pedophiles.

In the UK both Catholic and British officials are now accused of using a legal loophole to further torment victims of Child Sex Abuse by refusing to pay them compensation for their assaults.

The Criminal Injuries Compensation Scheme, which is a government agency, has now denied at least 700 children financial settlements because it said the victims had “consented” to the sexual abuse, a disgusting display of how immoral the Catholic Church is and how far its overreach of power extends.

Several lawyers who are representing victims have warned that this line of defense is becoming increasingly common amongst Child Sex Victims being further abused by the Catholic Church.

One specific case that the charity Victim Support brought attention to involved a 12 year old girl who was given alcohol by priests, brought into forest area, and then sexually assaulted by a 21 year old male from within the Diocese.

The young girl was denied compensation because she had “voluntarily” gone into the woods with the man, and no, I'm not exaggerating. That's the type of protections being given to these disgusting monsters.

“No child ever gives their ‘consent’ to being abused, and the increased use of this line of defence, although still quite rare, is worrying,” said Anne Longfield, the Children’s Commissioner for England. "I have contacted the Ministry of Justice previously and again recently about this issue and the Government should look urgently at what can be done to tackle it.”

Several media outlets have reported that they had seen documents regarding two more cases where the defense was used to further torment the victims of Catholic child sex crimes.

A male victim who was raped at the age of 15 by homosexual satanic pedophiles in disguise of the Catholic Church was told by lawyers representing the Catholic Archdiocese of Southwark that his abuse "actually occurred in the context of a consensual relationship (albeit one the claimant in retrospect now appears to regret)".

The victim said, "I was below the legal age of consent anyway and there's a grooming element to that kind of situation. It was totally disregarded and it made me feel really small.”

Dino Nocivelli, who is a specialist child abuse solicitor at Bolt Burdon, “It is time for the church to practise what they preach and to admit their failings, to take account of the damage this has caused to the lives of far too many children and lastly to apologise for the abuse.”

Another spokesman for the Archdiocese of Southwark said that the Catholic church does not comment on individual cases out of respect for the victim's privacy.

Yes, the Catholic Church which is responsible for tormenting children for the remainder of their lives is suddenly concerned about naming the individuals involved in the sexual assault “because of the victims”. What it needs to be doing is publicly executing these sick bastards.

He added that the Archdiocese “supports the right of anyone who has suffered harm to seek compensation.”

The Criminal Injuries Compensation Authority (CICA) was first launched in 2012, and approximately 700 victims and survivors of child sexual abuse have had their claims rejected by the organization.

It's apparent that the Church itself is responsible for more child sex abuse than any other institutional religion on the planet.

Just between the years 2004 and 2013 the Catholic Church has paid out nearly $3 Billion in hush money to victims all while defending the Priests responsible, often simply moving them to another location.

This is insane. Like you said, I don't judge Catholics but their church has been taken over by demonic pedophiles that's the truth

In the 1950s, a heretic sect called the "Modernists" (because they want to "update" the Church's doctrine) born out of the French Revolution took over Vatican City and most parish churches.

But these heretics and perverts do NOT represent the Catholic Church, which continues to teach Christ's doctrine undefiled around the world. http://www.ecclesia.luxvera.org/Directory-World.html

No wonder Pope Francis gravitates to, and pushes the "Muslim Issues" in our faces so much…. he's JUST Like Them!! Pedophilia is the "norm"?? 700 CHILDREN "consented" to be SEXUALLY ABUSED??

I call BS on that—but even still, a CHILD Cannot "consent".

And what about "that VOW of Celibacy" the Priests have taken?? Or the Vow of Poverty??

…..while they (literally) are setting on Billions of Dollars