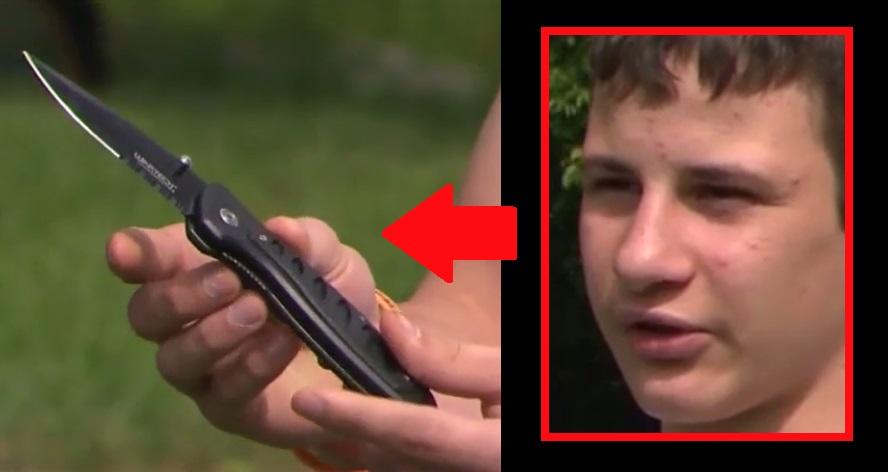 When an 8th grader in Brownsville, Pennsylvania realized he accidentally brought a knife to school he turned it in to the principal's office and in return was handed a three-day suspension along with a citation. The 13-year-old boy, Thomas Ross Jr., said he used a pocket knife to help his dad setup a futon Sunday night before putting the knife in his pocket and when he wore the same shorts to school the knife was still there. The boy says as soon as he realized his mistake he went straight to the principal's office and turned it in.

The next day, the boy's father received a call from the school telling him that Thomas had been suspended for three days. The school also informed the boy's father that he will be receiving a citation over the incident. The father was not happy with this since he believes his son did the right thing. Thomas Ross Sr. said, "There's a first-degree murder and a third-degree murder. There's no such thing as zero tolerance in the world. Why is there zero tolerance on a child bringing a weapon by accident to school and then doing the right thing and turning it in?"

Ross Sr. says his son has not been in trouble at school and never received a suspension or citation even once his entire life. He also says he was told that an informal hearing would be held on Thursday to discuss an even longer 10-day suspension. Ross Sr. went on to say, "When he realized he had it, he turned it in. He's a typical kid. Don’t discipline a child for doing the right thing."

The boy commented on his thinking when he realized he had the pocket knife on him, "I was scared that if I were to get it caught with it on me, it would have been worse than me turning it in." A Superintendent for the Brownsville Area School District, Keith Hartbauer, commented on the matter saying, "The safety and well-being of our students and staff is paramount. We will follow our district's policy, procedures, and solicitor's recommendation regarding this discipline incident."