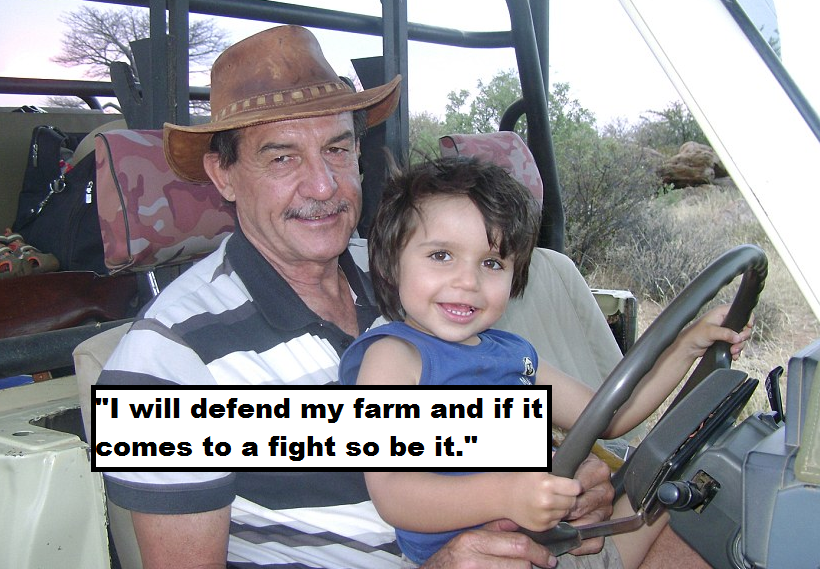 South Africa - Johan Steenkamp (67): “I Have The Right To Defend My Property By Force”

AfriForum, the political group representing South Africa's white Afrikaner minority released a list of what it claims are 190 farms that the government is targeting for immediate seizure.

Still on top of that list is the farm of Mr Johan Steenkamp (see our related coverage) who became world news last week after his hunting lodge was set to become the first expropriation of South African President Ramaphosa’s racially charged issue of ‘land re-distribution’.

Although the South African government’s Department of Rural Development and Land Reform has denied the validity of the list, Mr Steenkamp showed the world press the letter he received from the South African authorities informing him of their wish to ‘hand over the keys’.

“I will do whatever it takes to defend my farm. I don't want confrontation but the Constitution says that I have the right to defend my property and my family and that is what I will be doing if anyone comes for my farm. I will not be initiating force but my gates will be locked and I will have security here. If there is any force it will not be initiated by me. If others use force and it starts to get out of hand then I will defend myself.”

Related coverage: <a href="https://thegoldwater.com/news/35160-Vox-On-Trump-s-South-Africa-Tweet-Whether-Or-Not-It-s-Actually-True-Is-Irrelevant"> Vox On Trump’s South Africa Tweet: “Whether Or Not It’s Actually True Is Irrelevant”</a>.

Mr Steenkamp, 67-years-old, said he bought the land fair and square over 21 years ago, and that the South African government “do not want to pay us a realistic price for the value of what we own.”

“We have so far spent 600,000 rand ($50,000) on legal fees trying to save our farm from seizure. The situation is such now that we just want to move on as we have had enough and all we want is under the Constitution to go to court and as the law says get a fair price to sell.”

If South Africa is keen on avoiding a repeat of the destructive land seizures that ruined Zimbabwe’s economy, it must show to the world press that it is willing to work out a fair deal for these farmers. Mr Steenkamp bought the farm after the ANC was already in power and the ‘apartheid’ regime had ended.

The us gov is now involved in this mess. Trump will deal with madmen in s

Cool let's just watch all this chaos unfold and watch Africa go back to it's tribal roots. The best thing to ever happen to Africans was the white man, at least white people ended slavery for them, meanwhile Islam literally brings it back this very day. What does that say about Islam the supposed religion of peace?

Those negroes of the ANC have no claim to any of the land in South Africa. No one lived there when the Dutch arrived 400 years ago. Let's have a repeat of the Rhodesian war, but this time with US support. We can make South Africa great again!