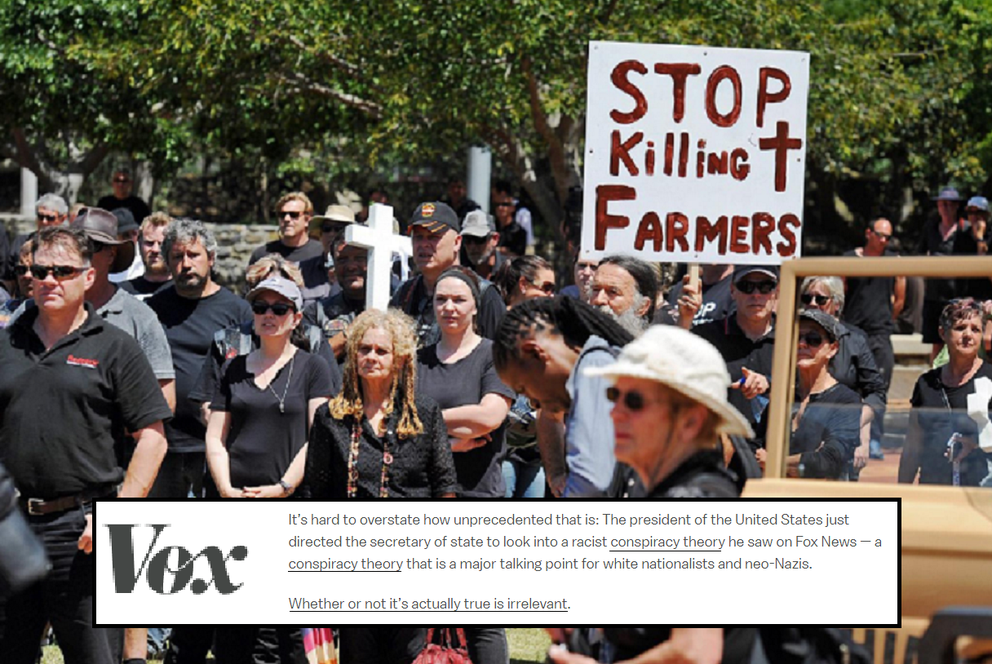 Vox On Trump’s South Africa Tweet: “Whether Or Not It’s Actually True Is Irrelevant”

Vox, the media company whose main mission is to ‘explain the news from a liberal standpoint’ for it’s mostly ‘millennial’ readership was founded by Mr Ezra Klein, a former journalist at the Washington Post. It has become an influential website over the years reaching a major part of America’s youth.

The viewing numbers for each explanatory video on Youtube of an issue in the news reaches in the millions while data shows that the site has more than 60 million unique visitors per month.

<blockquote class="twitter-tweet" data-lang="en"><p lang="en" dir="ltr">My friend is from South Africa (white) and a year ago, he moved his cousin &amp; family in with him in NY because it was getting so bad. Had to gate the house and were attacked many times just going to store. It’s worse than being reported</p>&mdash; MysteryOne (@MysteryOne) <a href="https://twitter.com/MysteryOne/status/1033403640361484291?ref_src=twsrc%5Etfw">August 25, 2018</a></blockquote>

Vox also has a show on Netflix called ‘Explained’ which highlights a segment in the news on a weekly basis and explains it in a 15-minute video documentary. I do admit having watched it before and was surprised that in order to explain the racial divide in American they invited two Democrats but no Republicans.

This week they released a story explaining what was behind US President Donald Trump’s tweet. Vox, just like The Guardian or CNN, goes on at length that the theory is mostly a conspiracy made up by White Nationalists and Neo-Nazis whilst leaving out any actual events that occurred in South Africa itself where there are dozens of witness stories of farmers and videos showing the left-wing EFF-leader Mr Julius Malema threatening to kill ‘white people’.

Vox conclusion reads: “It’s hard to overstate how unprecedented that is: The president of the United States just directed the secretary of state to look into a racist conspiracy theory he saw on Fox News, a conspiracy theory that is a major talking point for white nationalists and neo-Nazis.”

“Whether or not it’s actually true is irrelevant.”

Vox lays bare the current state of Mainstream Media in the US now. Whether or not anything that Mr Trump states is true is irrelevant, whether or not it can be used against him is.

this is proof that we do not want to bring in large numbers of African invaders into western lands.

If this isn't stopped soon there will be an indian uprising in the states to claim back "their land"!

Just like the media’s response to Trumps comment about “wire tapping” or the no go zones in Sweden? If so it’s just a matter of time till we get a violent farm takeover or the aftermath on video, or white farmers and their families looking at refugee status. Then the media will just ignore it but the people with even a sliver of intelligence will see that our President was trying to get out in front of the atrocity.