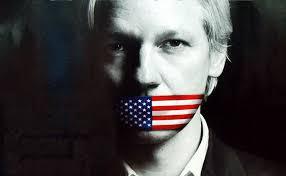 Free Assange NZ has been showing solidarity for Chelsea Manning amid her speaking tour in Wellington and Auckland. The group was on the scene with informational pamphlets and even musical guests. Free Assange NZ are also celebrating their Assange Asylum Parliamentary Petition being sponsored by a Member of Parliament which will be delivered to the Clerk of the House for formal consideration.

As they pointed out in their press release, Julian Assange has now been detained for six years in what amounts to solitary confinement. Considering the fact he's been held in such a manner for 23 weeks, he's over the legal limit for being held in isolation making it technically meet the description of torture. As his mother Christine Assange has pointed out, he is experiencing declining health and denied access to visitors, internet or phone calls.

Wikileaks, despite being defamed occasionally, has a far better record on reporting than any mainstream media outlet. In 11 years, they have a perfect record and have not had to retract a single item. In the past they've been accused of partisan bias, by certain persons on the left and right of the partisan aisle but they have been willing to publish documents leaked to them despite what country or political orientation are affected.

CNN's accuracy record is sorely lacking. It was at CNN that reporters falsely claimed that viewing leaked materials at Wikileaks might be illegal for Americans. CNN was at one point faced with a cease and desist order when a former CIA agent falsely accused Assange of being a pedophile.

Free Assange NZ is a regional outgrowth of the <a href="https://unity4j.com/">Unity4J movement</a> supporting Julian Assange and Wikileaks in their right to report the truth. Activists, journalists and academics including Kim Dotcom, Cassandra Fairbanks, Caitlin Johnstone and author of the Pentagon Papers, Daniel Ellsberg are among those in support of Unity4J.

Bradley Manning is a traitor who should have been shot.

Julian Assange is being persecuted for exposing the Corrupt government and corporate systems that control our society. He needs to be released, protected and lauded for his efforts.