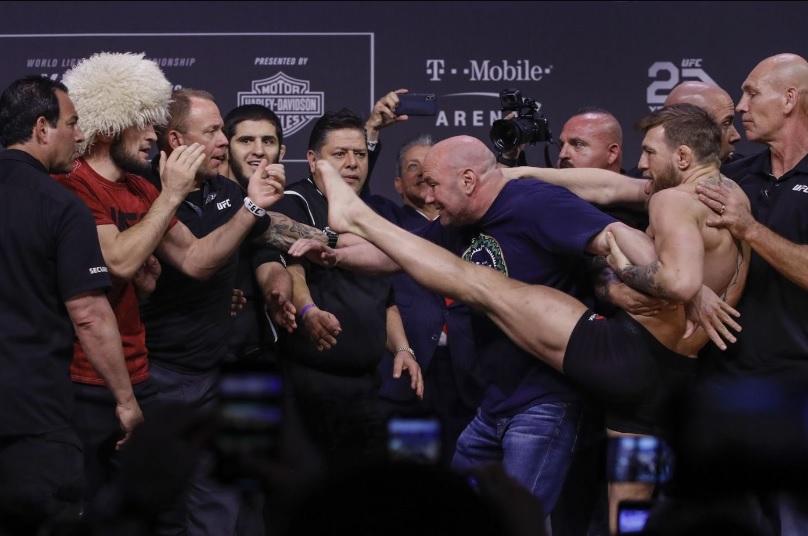 UFC 229 - Conor McGregor vs Khabib Nurmagomedov Hours Away, Who Will Win?

Two years after the dispute between the mixed martial arts legend Conor McGregor and the UFC resulted in his rematch with Welterweight Nate Diaz being canceled, Conor is finally returning to the octagon. This time, a new competitor has arisen to take his shot at the world Lightweight belt - Khabib Nurmagomedov, who has never lost a fight in the UFC. Khabib's record is 26-0-0 compared to Conor's 21-3-0.

The matchup is not the fight that some were hoping for, but after the falling out between McGregor and the UFC and the unstable place McGregor was in when he attacked a fellow fighter's tour bus, it is nice to see him back in the octagon with a positive direction for his career in motion. The UFC's Dana White admitted he thought the former double champion wouldn't come back. "When a guy makes $100m you don’t know whether he’s ever going to fight again," White said.

Connor was the first to hold two world champion UFC belts at once, but they were stripped, one in 2016 and the other in 2018 when McGregor refused to defend them. It was Dana White who ultimately made the decision to strip the belts from Conor, but perhaps that was what the fighter needed to get his focus back where it needs to be to continue fighting on a world champion level. After all, how many of us can say we would continue to operate at the same level of discipline after getting paid $100,000,000 for a single fight?

"Conor made a lot of money, I’m sure he had a lot of fun and did what he wanted to do but no matter how much money you make, you can only sit at home for so long before you start to go crazy," White said. "You can tell this guy’s passionate about fighting, he loves breaking records and he obviously loves making money, so he’s back." The last time McGregor appeared in the Octagon was when he stopped Eddie Alvarez to win the lightweight title two years ago.

Conor has been somewhat of a cash cow for the UFC and it led to him wanting more control over his fights and when he had to appear for public interviews and events. Conor felt that the UFC was demanding him to appear too many places while he was supposed to be training on top of being randomly drug tested and having to let USADA know where you are at all times.

Related coverage: <a href="https://thegoldwater.com/news/31397-Connor-McGregor-Vladimir-Putin-One-Of-The-Greatest-Leaders-Of-Our-Time">Connor McGregor: Vladimir Putin "One Of The Greatest Leaders Of Our Time"</a>

While the press conferences are usually overdramatic for the show, this time, Conor McGregor accused his opponent of associating with terrorists, and this took their rivalry to a new level. I don't expect to see the pair shaking hands tonight or tapping gloves at the start of the round. Conor is Irish and has no problem saying what is on his mind, similar to the way Trump will say what it actually on his mind, but he holds enough sway with the whole country of Ireland that entire stadiums of Irish fans will travel to his fights and sing Irish anthems in his support.

When it comes to tonight's matchup against Khabib, the Irishman held nothing back and took aim right at the UFC lightweight champion's manager who was an FBI informant. McGregor said that even a concussive knockout tonight would not be enough to settle their bitter rivalry. " His manager is a fucking snitch terrorist rat," Conor said. "He was pulled off a flight going from Cairo, Egypt to New York on September 11, 2001, and caught with five passports in his possession.

"He turned informant and turned on the people he was working with. I don’t even know how that man is in this f ** country."

"I'm sure everyone here, the Irish people, are facing all this immigration stuff on the way over. My own people are facing it, my family’s getting stopped at the airport. And then you’ve got this man with such a crazy background, Ali Abdelaziz, and he’s rocking around free. It begs belief, to be honest," Conor continued. He didn't make known how he knows what he said is true or if he has any evidence to back it up but clearly Conor believes it is true.

Khabib Nurmagomedov stormed out of the final press conference Thursday after Conor failed to show up on time. Khabib told the crowd that he would leave if his opponent did not arrive promptly at the MGM Park Theater. He answered media questions for 15 minutes but sure enough, Conor never came, and Khabib left the stage. Khabib grabbed his belt on the way out and said McGregor had shown him "big disrespect."

According to CBS Sports MMA, " The latest McGregor vs. Khabib odds have McGregor as a +150 underdog (risk $100 to win $150), while Nurmagomedov is -180 (risk $180 to win $100)." CBS MMA expert Cambell said, "The combination of former interim lightweight champion Tony Ferguson rushing back from major knee surgery after just five months and Pettis starting to finally look like his former champion self as of late could make this a sneaky trap fight for 'El Cucuy'."