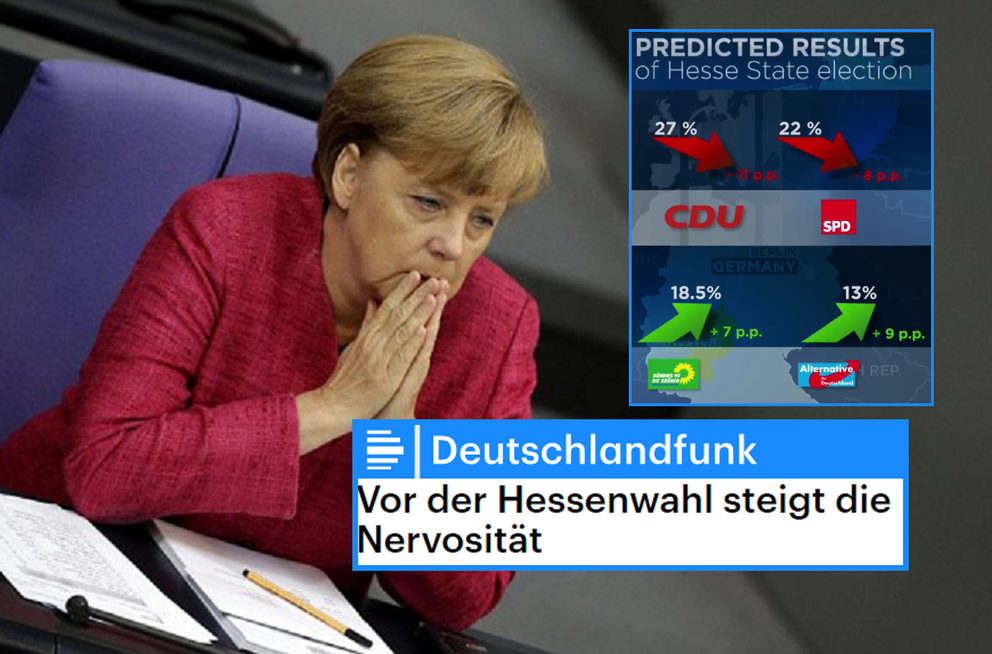 Just two weeks after her southern heartland Bavaria was plunged into election disaster when her regional CSU partner lost its majority for the first time in decades, German chancellor Angela Merkel looks set for another blow, this time in the financial capital Frankfurt where the region of Hesse will go to the polls this weekend.

Frankfurt am Main is normally a loyal follower of Ms Merkel. For the past 2 decades it has been ruled by various CDU-led coalitions. However, the latest polls have the CDU plummeting to 26 or 27%, a drop of 12 points since 2013.

If it comes true, and most newspaper commentators agree that it will, then the vote could plunge Germany’s grand coalition into a fresh crisis, as this would mark a nationwide trend which sees support nosedive for both Ms Merkel’s Christian Democrats (CDU) and her coalition partner Social Democrats (SPD).

Whereas Ms Merkel’s CDU is mostly chased by the rightwing anti-immigrant Afd (alternative for Germany), who are polling at 13% and are expected to enter the regional parliament for the first time, the leftwing socialists are predicted to fall even further and see their support completely replaced by the Green party.

Mr Kevin Kühnert, head of the SPD’s youth wing, told Germany’s biggest magazine Der Spiegel in a recent interview, that the replacement of socialist parties in Europe by green support was part of a broader trend, but that certainly in Germany it would pose an immediate problem.

“The grand coalition is a symptom of a problem that’s bigger than itself,” he stated.

“But if we have the feeling the coalition can’t be saved and that no substantive work is possible, then we have to draw a line underneath it. At some point we have to decide on that.”

If Germany’s conservatives should effectively face another political debacle in Hesse, he could well step down.

And at the same time, bring the unpopular grand coalition with the SPD, known as GroKo, to an end, which could also spell the end for the political career of Ms Merkel.

When you sell your country out for Global Socialism what do you expect your countries voters to do?

Heck she and her socialist party invited in the Iranian/SA funded traveling Muslims hordes to the tune of over 1 million.

The Western EU nations allowed over 3.2 Million in 3 years. Germans and other nations citizens are fed-up with this Globalism Crap.

Because repeatedly time after time, once the Muslims numbers grew they started pushing for THEIR customs and ways be allowed, followed by demands of Self rule and Self Law enforcement inside the guest country.

Merkel ruined Germany allowing all of those so-called refugees in that country.

Fuck HER, And everything She Stands for!