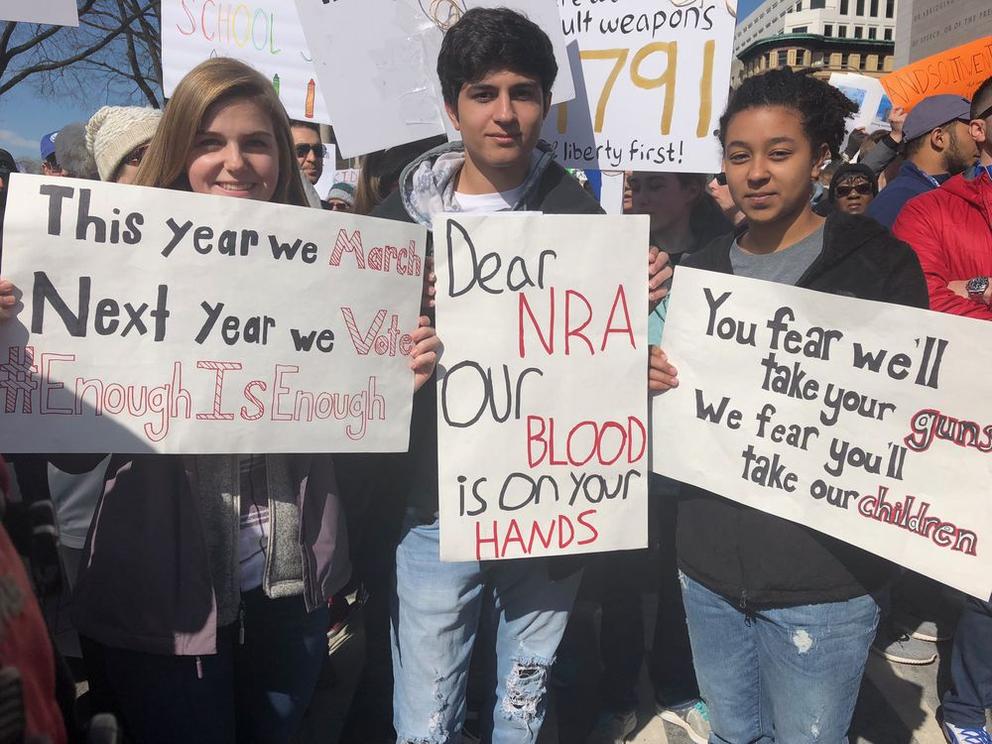 March For Our Lives: A Misguided, Anti-Gun Movement

The anti-American protests that have sprung up in the wake of recent school violence in Parkland, Florida are composed of people who are professionals at playing the blame game. They look to blame the NRA, Congress, even American voters, anyone but themselves and how their own liberal ideology is destroying the country.

The liberal left is spinning and weaving their agenda to make people rely on government and take away the dangerous guns because citizens are too stupid to have guns. Now, they have stooped as low as including young minds that have not had the chance to learn from experience and see around corners to predict the effect of their actions.

These young kids are being scooped up and praised on news networks like CNN who have been more than willing to give students a platform to spew the anti-gun rhetoric they've been taught. But these same networks are denying an opportunity to speak to the very same victims but who don't tout their gun-control narrative.

Recently, <a href="http://thegoldwater.com/news/21398-Pro-Trump-Family-of-Parkland-Victim-Banned-From-Speaking-at-March-For-Our-Lives">Andrew Pollack and his family were denied the opportunity to speak</a> at the "March For Our Lives" protest simply because they are pro-Trump and don't believe more gun control is the answer to school violence. Instead, Pollack and his family suggest tightening up security at schools much like we protect courthouses and airports.

Although the message behind the March For Our Lives protest is misguided and just plain wrong, one positive thing that may come out of this is the effect it may have on politicians in Washington who are too busy patting themselves on the back and giving each other bonuses to solve simple issues such as metal detectors and guards at public schools.

Related coverage: <a href="https://thegoldwater.com/news/20849-Why-Guns-And-Freedom-Will-Never-Be-Separate">Why Guns And Freedom Will Never Be Separate</a>

Just last week we saw Congress bonus itself $48 million and increase their own salaries by $12 million. Politicians have been become unnecessary and stagnant, in 2018 the internet has connected every person in real time. We no longer need representatives to do whichever the highest bidder pays them to do. We need a way for every person's voice to be heard and put to a vote.

So as a result of the March on Washington by the March For Our Lives protest, perhaps this will put some heat to the feet of those sitting comfortable and protected by armed security up in Washington while the rest of America loses its ability to defend itself more and more each day from liberal policy and outright attacks on the constitution.

Last week's omnibus also saw a raise for the House of Representatives who increased its budget to $1.2 billion, a $10.9 million increase. The Senate also increased its own expense account by $15,000 raising expense allowances from $177,000 to $192,000. That is several times what the average American is making a year.

Did the American people get a say in these increases and self-bonuses? Or is government just spending the taxpayer's money freely and unfettered while the American people are forced to foot the bill. While I don't agree with the March For Our Lives protest, I do like to see anything that puts career politicians feet to the fire.

The bottom line is, by protesting the 2nd Amendment and pushing for more gun control, will not have the effect they think it will have. Just look at countries where guns are illegal, gun violence, terror attacks, mass stabbings, all still take place even though they are all illegal.

The entire movement also seeks to villainize white males who are pro-gun or pro trump. God forbid you love America, wear a Make America Great Again hat and carry a flag. You're an evil white man if you do that.

This country was founded on and it works because of the right to defend yourself with a firearm. It helps us keep each other in check, our neighboring countries in check, and it provides the means to defend one's family from the evil that does exist in the world, even in America.

What is scary is how many ignorant people are allowed to exist on the taxpayer's dime then turn around and blame those same Americans paying for their food, housing and cell phones

When did the NRA pull the trigger?

If anyone is at fault, it is those that for 20+ years AFTER COLUMBINE still have refused to Secure Our Schools (S.O.S.)

Why do Americans want to throw their rights away?

I could catch somebody raping my mother and kill them and still go for jail.

And I’m not even white.