House Minority Leader Nancy Pelosi (D-CA) has just accidentally revealed classified information saying that she, along with the House Intelligence Committee, have made previous visits inside of Pyongyang, North Korea on live television.

The grave mistake from Pelosi occurred as if she hadn't realized the monumental truth she had just unveiled, continuing to speak about it, mentioning that she along with other members of the committee commenced discussing the buying and selling of missile technology with the leadership of North Korea.

This revelation will have consequences, and the mistake will not go unwarranted.

There are several unconfirmed reports that Americans who have tried to share this information to various video sharing websites and social media have had the videos deleted, which is possible considering the enormous details revealed in this video.

“Well, let me just say that as one of the few members of Congress that's been to Pyongyang, a number of years ago as a member of the [House] Intelligence Committee,” revealed the seemingly confused Nancy Pelosi. “It's a frightening place. A Place that is… uh… err…”

At this point in the news conference you can hear someone “whistling” as if to get the attention of Pelosi, not realizing what she'd just said in front of the cameras, or the implications of such. She seems to glance about looking to see what the unidentified person(a) is trying to signal to her.

“When I've seen poverty throughout America… er… The world,” Pelosi adds, seemingly lost for words. “As an appropriator, who's visited the world, and seen our initiatives and how helpful they might be in the alleviation of poverty and the eradication of the disease.”

Pelosi seems to go off track, almost senile, one moment discussing, almost <i>bragging</i> that she's traveled inside of Pyongyang, North Korea. I don't think she realizes what she's admitted here.

“When I went to… North Korea… I saw poverty in a spirit that was just… Mind-boggling,” Pelosi said, shaking her head, still not understanding the admission she's just made.

“Heh, in many respects” Pelosi adds, cracking a small laugh.

If the time frame she's suggesting is mentioning POWs, could she be discussing the Otto Warmbier case? This is purely speculation, but Warmbier died in June of 2017, after having been imprisoned in North Korea since the end of 2015. If this were the case, then the visit to North Korea would have taken place sometime around that time frame.

Again, that's speculation. Nancy had much more to say, and what she would add is mind-blowing.

“We want you to stop, uh, proliferating uh… Selling your missile technology,” Pelosi said. “Issues like that, checking in on the hunger situation. People were starving. Even though their motto was ‘self-reliance,’ they couldn't feed their own people.”

“And uh… What they told us then, and it's relevant to now…” Pelosi said. “Hey… uh… We just sell this technology, for money.”

“You wanna buy them? We'll sell them to you,” Pelosi said while gesturing her hands as if she were both remembering the incident in a mental flashback, emphasizing on the discussion of either buying or selling missile technology to a Communist Dictator, and a brutal regime.

Why exactly was Nancy Pelosi or any member of the United States of America's government discussing the purchase or sales of missile technology with a brutal leader like Kim Jong Un, or anyone else in the regime?

“And so… My guidance from there to the current situation is… The capability of the North Koreans… to create either the technology for… For a weapon.” Pelosi said. “The uh… Miniaturization of it. The capacity to launch and the intention to do so is something that we need to know as much about as possible… But in the addition to that, they're proliferators.”

The world is unsure of what meeting Pelosi is discussing, and what exactly she intended to suggest her reasoning, along with the House Intelligence Committee's purpose for being in North Korea was.

This is a disturbing press conference from the House Minority Leader Nancy Pelosi (D-CA), and her inability to refrain from speaking such classified information pertaining to a visit inside of North Korea further showcased why she needs to resign.

Pelosi could be suffering from dementia, although that remains unclear, she's certainly not fit for office.

These state secrets were completely unknown to the American people, who until now have had no reason to believe that any member of Congress has traveled into Pyongyang, North Korea.

Only recently did we learn Mike Pompeo had made a trip into the isolated nation, but this revelation, if chosen to be reported by the mainstream media, will bring about serious questions from the American people.

Lock this idiot up. Even worse, this means US politicians have been traveling into North Korea for years dealing with Kim Jong Un? Is North Korea a Puppet State?

Did you even begin to research this first? She made this statement ages ago and it was almost the same thing said. Just cos the idiots who follow Q (I am one of those idiots btw) have interpreted Q to mean that this has never happened before why did you decide it wasn't even worth looking up? Now I have to ask - is this site actually newsworthy at all?

An article from Nov 2017 where she says the same thing. Use Google or DuckDuckGo or ANY search engine ffs…

Dimms got nothing but whinning! Get a life! This is america! Pull ur heads out or the same thing that happened to Rome will happen here!

This is an incredibly stupid and misinformed article. This website is full of garbage. What idiot doesn't know that that whistle is an notification alert from a cellphone. I guarantee you that this twitter account IWillRedPillYou is some dipshit writing false news stories to trick gullible Trump supporters. Think critically America. Stop falling for this garbage.

Pelosi has been working overtime on her alibi. That her mental state, dementia, has taken a strong hold.

Hard to jail someone with dementia. Think Livy Soprano…

otally incorrect. The person who wrote this is a moron.

Pelosi was referring to what Kim Jon Il said, not what she says.

She was paraphrasing Kim's father.

It’s time for Ol’ Floptits to get that all inclusive stay at Gitmo Club Fed, what a stupid twat!

OLD NEWS , but sheds light on the Obama and the aging Socialist Liberals we have in the Swamp.

Must retire by age 70 (SCOTUS included) .

Must NOT serve more than 4 terms in the House and 3 in the Senate .

Must pass an annual Mental Capabilities Test after age 60.

It wasnt a person whistling you idiots

It was a phone alert in the crowd

the shills are out

This "article" is absolute horseshit. Pelosi went to NK in 1997 with a bunch of other congressmen, Rs included, and it was reported on when it happened. Also that "person whistling" was a phone. This website is an embarrassment to anyone with a brain.

Yes, it was a cellphone alert sound, but what better way to disguise a, "stfu u senile imbecile!" alert from a handler. I've read the comments implying that those who don't recognize the sound as that of a cellphone alert que are less than intelligent. I would again counter with the theory that the "signal", to stop her incoherrent rant could have no better disguise.. And would suggest that those that don't realize that, may be the ones not, "thinking things through intelligently".. Wake up sheeple!!

It was public knowledge in August of 1997 that Nancy Pelosi went to NK along with others. This, so called, article is total and utter bullshit.

I agree these didwicks or dicks should get a life what's left of it after TRUMP,

Did Pelosi make (personal) money on an arms sale to Nortg Korea? Was it from a $150 million sale? 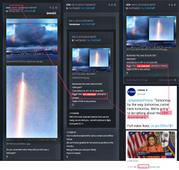