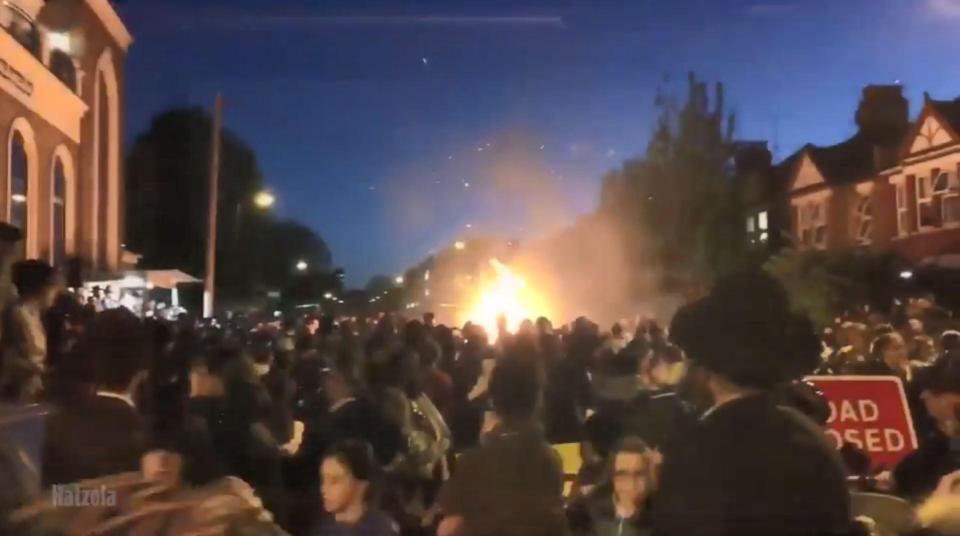 Footage from a Jewish festival in London shows a giant fireball erupting in the middle of a crowd after a mobile phone was thrown into a bonfire. Hundreds of people gathered in Stamford Hill, London for an annual event called Lag BaOmer. The event incorporates bonfires and large groups of people gathered around them.

The footage shows a bonfire about to be lit as festival attendees sing songs in the background just a few feet away. Without warning, a massive explosion erupts and flames stretch over the gathered crowd. The explosion took place around 11 p.m. and prompted the London Ambulance Service to respond along with the Jewish volunteer ambulance service Hatzola.

The condition of the injured is unknown but at least 30 are reported to have been hurt in the blast. Witnesses say that mobile phones were being thrown into the raging bonfire prior to the explosion. One witness even said the rabbe, a leader of the Chassidic Jewish movement, had thrown a phone into the bonfire to warn against the evil of smartphones.

Another witness told the Sun, "It appears that the explosion was caused by fuel and not the smartphone, although there definitely were multiple smartphones placed inside the pile to be burned." The Lag BaOmer is a Jewish holiday that represents a break in the 49-day period between the Passover and Shavuot, a time when weddings and haircuts are forbidden.