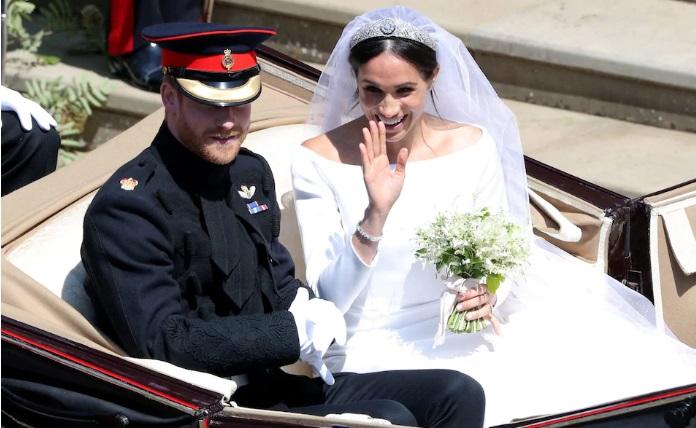 The wedding of Britain's Prince Harry and his bride Meghan Markle was a star-studded affair with celebrities all the way from Hollywood making an appearance. The pair were proclaimed husband and wife Saturday at their fairytale wedding at Windsor Castle. The wedding service was streamed live and watched by an estimated audience of 1.9 billion viewers around the globe.

After walking his now daughter-in-law down the aisle, Prince Charles gave an emotional speech about his "darling old Harry" that moved the audience to tears at the afternoon ceremony. The newly married couple left for the evening reception in a silver-blue Jaguar E-Type Concept Zero to Frogmore House in Windsor. The classic car was first manufactured in 1968 and has been converted to run on electricity.

The date of the wedding was commemorated in the license plate of the vintage vehicle, E190518. Prince Harry held the door open for the bride before he drove her to the wedding's private reception in a scene that looked like it was out of a James Bond film. The top of the West Steps was decorated with hundreds of cream and white flowers with green foliage. The new royal couple stopped under the flowers and kissed as onlookers cheered them on.

<blockquote class="twitter-tweet" data-lang="en"><p lang="en" dir="ltr">Thank you to everyone who came to Windsor and those who followed from around the UK, the Commonwealth, and the world today. Congratulations once again to the newly-married Duke and Duchess of Sussex. <a href="https://twitter.com/hashtag/royalwedding?src=hash&amp;ref_src=twsrc%5Etfw">#royalwedding</a> <a href="https://t.co/SQWQg5ZsOq">pic.twitter.com/SQWQg5ZsOq</a></p>&mdash; The Royal Family (@RoyalFamily) <a href="https://twitter.com/RoyalFamily/status/997932143396507649?ref_src=twsrc%5Etfw">May 19, 2018</a></blockquote>

It was estimated over 100,000 people lined the streets of Windsor to pay homage to the royal wedding. Prince Harry and his bride started off their married life with a tour in an Ascot Landau carriage with an open top. Harry is the Queen's grandson and Megan was a former actress from America who is now an official member of the royal family. The pair said their vows before a crowd of 600 guests including the Queen and over 30 Royal family members.

<blockquote class="twitter-tweet" data-lang="en"><p lang="en" dir="ltr">The wedding cake is to be served at the Reception. It was designed by Claire Ptak and features elderflower syrup made at The Queen’s residence in Sandringham from the estate’s own elderflower trees, as well as a light sponge cake uniquely formulated for the couple. <a href="https://twitter.com/hashtag/royalwedding?src=hash&amp;ref_src=twsrc%5Etfw">#royalwedding</a> <a href="https://t.co/kt5lE4tEn9">pic.twitter.com/kt5lE4tEn9</a></p>&mdash; Kensington Palace (@KensingtonRoyal) <a href="https://twitter.com/KensingtonRoyal/status/997828026971893760?ref_src=twsrc%5Etfw">May 19, 2018</a></blockquote>

The lunchtime reception hosted by the Queen featured a massive wedding cake designed by Claire Ptak and featured elderflower syrup made at The Queen's own residence.