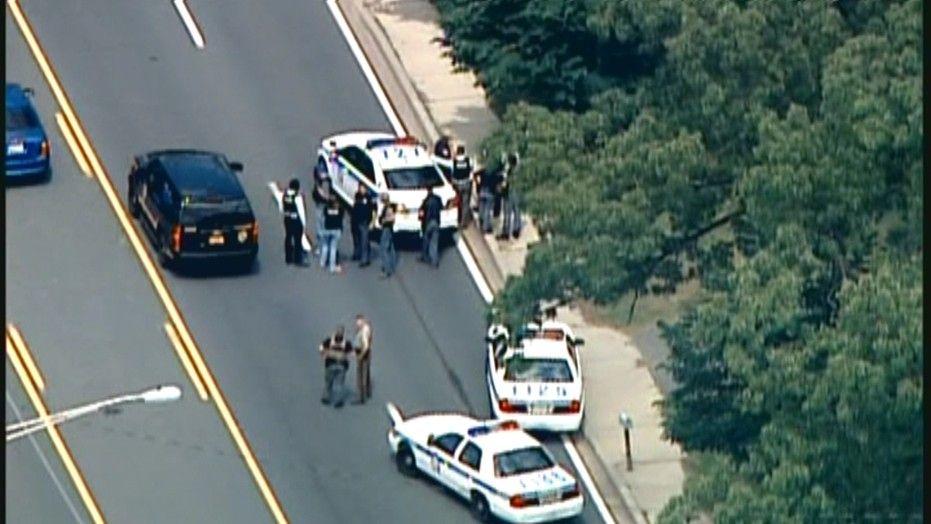 Related coverage: <a href="http://thegoldwater.com/news/27295-Amazing-Footage-of-Ellicott-City-Maryland-Submerged-Under-Flood-Waters-is-a-Must-See">Amazing Footage of Ellicott City, Maryland Submerged Under Flood Waters is a Must See</a>

One Facebook user wrote: "I was hoping they'd kill him during apprehension. What a waste of life. He's currently breathing air some decent person could be breathing. I personally am tired of good for nothing hood rats committing adult crimes and people STILL saying crap like, he had hard times growing up, society made him do these things because he had no role models." The comment drew ire from another user who wrote: "I hope all you whites have the same level outrage next time one of your youths decide to shoot up a school of innocent children. You all are a disgusting group of devils."

County fire spokeswoman Elise Armacost said that no previous case has generated such a massive online reaction. Authorities tried to calm the hostility and pleaded for civility as county staff struggled to moderate comments that featured profanity or were typed in all caps but the avalanche of angry posts continued pouring in. Many comments called for the teen who drove the Jeep to be hanged, shot, run over, and even raped. Armacost said, "Sadly, these comments are a microcosm of the conflicts and lack of civility we see in the country right now."

A Johns Hopkins sociologist named Stephanie DeLuca has studied the Baltimore youth and is the daughter of a 40-year veteran of the Chicago Police Department and she described the "absolutely awful" case as a perfect, polarizing storm. "It touches on all these intersections – of race, policing, city-county," DeLuca said. She is the co-author of the 2016 book "Coming of Age in the Other America." DeLuca added that "Once fear is sparked, anger is sparked."

Baltimore police say the teenagers were robbing homes in Perry Hall Monday afternoon when Baltimore County Police Officer Amy S. Caprio approached the stolen Jeep. She was then run over by 16-year-old Dawnta Harris of the Gilmor Homes public housing project. Officer Caprio died shortly after the attack resulting in Harris and the three other teens to be charged as adults with first-degree murder. Police say Harris fled home detention this month while awaiting sentencing for a car theft. If he was not released to home detention perhaps Harris would still be alive.

Related coverage: <a href="http://thegoldwater.com/news/27180-Hollywood-Liberals-Exposed-for-their-Desire-to-Murder-Children-in-a-Rage-Against-Trump">Hollywood Liberals Exposed for their Desire to Murder Children in a Rage Against Trump</a>

Some social media comments said, "ROT in prison & actually they should get the DEATH PENALTY!" A former Democratic state senator named Clarence M. Mitchell IV said, "You're talking about a black young man from Gilmor Homes in a very, very white area, and a white female police officer – the racial dynamics can't be eliminated. I'm sorry, at some point we have to stop being so sensitive. We are too worried about how we look as opposed to correcting this reality. The reality is we have a problem. We are a violent city. We have a dysfunctional juvenile justice system. Those are the facts."

Blame is on obama and the leftists

the colleges and press have been feeding this war which will continue to get worse until those colleges and media people get caught up in the deadly violence that will come from all these calls for racial strife.

I consider the college professors calling for reparations andthe kill white people cry's they are muttering mean that, in my opinion, I consider them the cause of this and my enemy.

Let's not forget, for instance, Brown university which benefitted greately from slavery…these people are super rich and own the best properties in the area. and they are the people inviting massive illegal immigration while they sit back and cause this racial strife.

they have not taught that slavery went on for thousands of years until white America fought a civil war to abolish the practice……..the rich, including those around those colleges and universities gave up some slaves, but they kept the best homes and propeties and expect us to forget that they are the ones who should be paying reparatons not to the blacks but rather, to the white people they are attacking right now in our modern times with their speeches and lectures encouraging racial violence against white people.

wait, because, at some point we will come for them en masse and hang them in the streets for treason against our country.

Again, once the violence gets out of control, we will hunt down the college and media people who fostered all this violence from their multi million dollar mansions financed via african slavery

Why does it always have to be Black vs White? This is a story of 4 thugs, 4 criminals who killed an LEO. In my mind it doesn't matter what color the criminals were, they killed somebody. It also doesn't matter what color or gender the officer was. Their life was taken. When I see that happen I want the offender to pay dearly. If they are old enough to kill, they are old enough to fry. If the color of the officer was a factor to the criminals then it should be called a hate crime.

We need to go back to the old ways of punishment. EYE FOR A EYE! If we had real laws and punishments for stuff like this, it would never happen because the criminals would know the consequences of their actions! Going to prison now is no punishment and that's the biggest problem!

Blesssings for her and her ffamiy ~

if you could hear these black kids "speak" you'd understand that there is no hope for black america. all the affirmative action in the world can't change their DNA into that of civilized human beings.

What if the POLICE mimic 'd the BLM / Liberals process.

An went on a looting and private property destroying, fire bombing shooting spree? But in the suspects community?