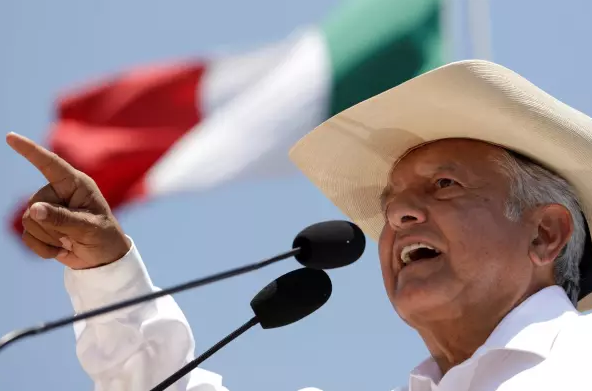 The leading candidate to become Mexico’s next president, Mr Andres Manuel Lopez Obrador, seems to have knocked out his nearest opponent by dubbing the centre-right candidate Mr Ricardo Anaya as “Richy Rich” in the latest debate.

In a clearly orchestrated moment, Mr Obrador clinched on to his wallet, hoping to protect it from his rival candidates as he laughed.

The debate style appears to have superbly paid off as the latest poll show support for the leftist candidate now stands at a whopping 52% or more than both of his nearest rivals combined. With one month to go before the voting booths open, an Obrador presidency seems all but decided.

Because of this, several of Mexico’s leading businessmen are now openly warning their workers against the plans of Mr Obrador.

For instance, Mr Germán Larrea, CEO of the major mining, rail and infrastructure conglomerate Grupo México, wrote to his 30,000 staff and shareholders in a (on social media widely criticized) letter: “We have recently heard worrying proposals of nationalising companies, scrapping the energy and education reforms among other ideas that would turn the clock back decades to an economic model that has been more than proven not to work . . . Venezuela, Argentina, Cuba, the former Soviet Union, among others, are witness to that.”

In a similar move, Mr José Ramón Elizondo, head of Grupo Vasconia said to his personnel: “We’re all very mad at politicians because of corruption, impunity, insecurity, poor services and the lack of opportunities.”

“All that can cloud our judgment and could lead us down the road of populism.”

Mr Obrador expected some sort of reaction from the various business leaders, and when asked by the press for a reaction, he responded: “I understand Germán Larrea doesn’t want change, things have gone very well for him. Let him not scare anyone and not be afraid himself. We are going to triumph.”

Political analyst Mr Gabriel Guerra meanwhile believed all effort by the business leaders was in vain though as any such phrasing “could easily be counter-productive because it feeds into the López Obrador narrative.”

I think it will be Mexico's doom just like Cuba and Venezuela!! We need to build our WALL because more will try to come once it hits their economy!!