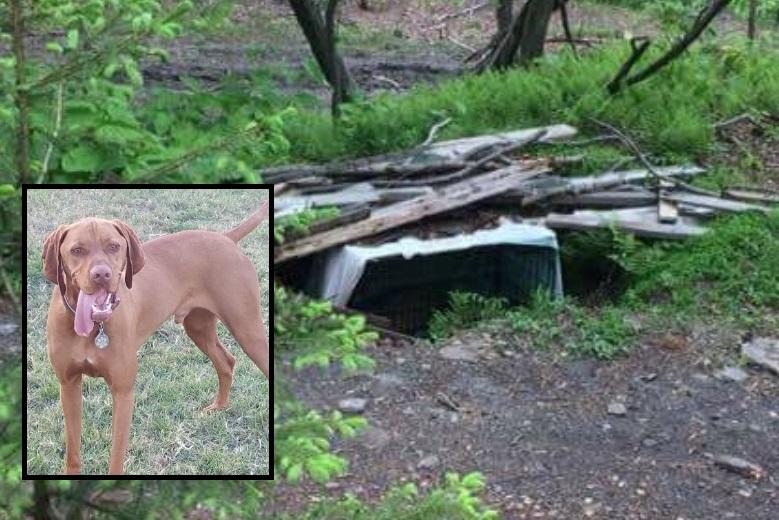 Pennsylvania police are searching for a suspect who buried a dog alive in one of the worst cases of animal cruelty the workers at the Ruth Steinert Memorial SPCA in Pine Grove have seen. The SPCA got a call over the weekend that led animal cruelty officers to the woods near Minersville where hikers reported to have found a pit bull locked in a cage that was partially buried in the ground. The dead pit bull and the cage was partially covered by old pieces of wood.

SPCA workers say there is no doubt the dog was left there to die intentionally. It appeared to have starved to death according to the animal cruelty officers. One officer named Bridget Barder said, "I was in shock. I've never seen anything like what I seen. It was horrid. Horrid. I don't even have the words to explain it. Barbaric. Torture. Horrid." SPCA manager Lori Sult added, "Whoever did this went to great effort and was sick. They basically built a torture chamber for this dog."

Related coverage: <a href="https://thegoldwater.com/news/24404-Texas-Houston-Teen-Threw-A-Puppy-100-Feet-To-Its-Death">Texas - Houston Teen Threw A Puppy 100 Feet To Its Death</a>

Sult speculated the dog had been buried there for about two months. She also said unwanted animals can always be taken to an SPCA facility or a whole host of options to get rid of a pet. "If you don't want to deal with the SPCAs, not that it would be the right thing to do, but if you're going to dump an animal, just release it," Sult said. Unfortunately, this is not the only case of a dog being buried alive. Last year, a $15,000 reward was offered for the culprit who buried a dog in Tucker, Georgia.

The community and SPCA employees are hoping police will be able to bring the person responsible for the barbaric act to justice. She added, "This dog died a horrible, horrible death. There was just so many other options. The dog did not have to die this way." A <a href="https://www.gofundme.com/5lyd5hs?member=239848">GoFundMe</a> has been set up to raise money for a reward for information that could lead to an arrest.