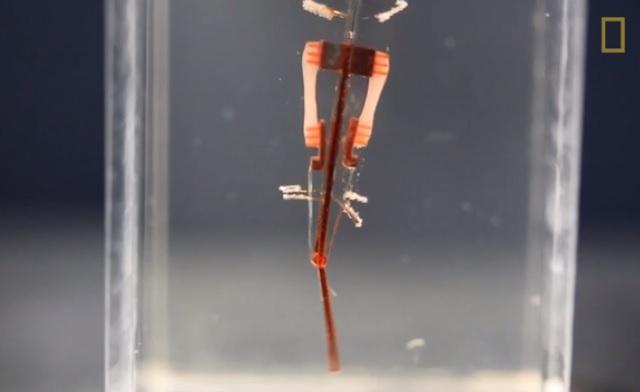 The latest development in robotics has introduced living cells into the robot's limbs which allow it to work like a human's joints. The living muscles were developed in Tokyo and were achieved using a new method which uses living rat muscle tissue attached to the robotics. The design is being called a "biohybrid" in a new form of robots which incorporates biological matter and mechanical parts. The latest design displayed in the journal Science Robotics simulates the look and movements of a human finger.

The simple movement could have drastic implications on the future of robotics in a whole new way. More life-like sex robots or even military robots that could self-heal could be on the horizon. A demonstration of the new bio-limbs showed the robot's hands could perform basic talks with the living muscles. A mechanical engineer at the University of Tokyo and the study's author Shoji Takeuchi said, "If we can combine more of these muscles into a single device, we should be able to reproduce the complex muscular interplay that allows hands, arms, and other parts of the body to function."

The researchers took to looking at living muscle tissue because plastic and metal provide very rigid and limited range of movement. But growing their robot's living muscles by layering hydrogel sheets filled with myoblasts (rat muscle cells) they were able to induce the growth of brand new muscle on the robotic appendage.

Related coverage: <a href="https://thegoldwater.com/news/26215-Death-Machines-The-Fully-Autonomous-Robots-That-Could-Kill-Us-All-Video">Death Machines: The Fully Autonomous Robots That Could Kill Us All (Video)</a>

The living muscles have one drawback, they can only be used underwater since they need the liquid to survive. Previous studies using living tissue in robots led Takeuchi to issues with the muscles shrinking after use to the point they became useless. This is just one of the many hurdles that researchers and inventors must overcome. One approach to combat the side effects included layering muscles parallel to each other to simulate an antagonistic pair.

Muscles in the human body such as the biceps and triceps in the forearm are also antagonistic since one muscle contracts when the other expands. The implications of the latest advancements in Takeuchi's research suggest a potential in genetically modifying the muscle cells to contain motor neurons but the science isn't there yet.