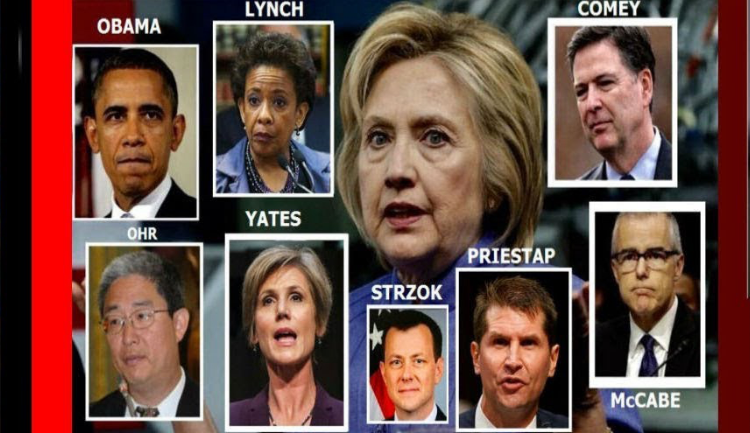 The Report is nearly 600 pages long. It is the product of an 18-month review, incorporating dozens of witness interviews and hundreds of thousands of documents.

One of the most incomprehensible findings in the Report concerns texts between agent Peter Strzok and bureau colleague Lisa Page.

According to the report, Page texted Strzok in August 2016 and said: “[Trump’s] not ever going to become president, right? Right?!”

Strzok was a lead investigator on the Clinton case and also worked the Russia investigation until he was removed from the assignment.

“In particular, we were concerned about text messages exchanged by FBI Deputy Assistant Director Peter Strzok and Lisa Page, Special Counsel to the Deputy Director, that potentially indicated or created the appearance that investigative decisions were impacted by bias or improper considerations,” the IG report said.

Horowitz revealed other anti-Trump texts between the two FBI officials, who were romantically involved.

Press Secretary Sarah Sanders said the report "reaffirmed the president's suspicions about Comey's conduct and the political bias amongst some of the members of the FBI."

Horowitz’s investigation looked into allegations of whether it was improper for Comey to make a public announcement recommending against prosecution over the Clinton email arrangement while calling her actions "extremely careless."

"We found that it was extraordinary and insubordinate for Comey to conceal his intentions from his superiors, the Attorney General and Deputy Attorney General, for the admitted purpose of preventing them from telling him not to make the statement, and to instruct his subordinates in the FBI to do the same," Horowitz’s report says.

Comey responded to the report on Thursday by tweeting that he believes the “conclusions are reasonable, even though I disagree with some.”

<blockquote class="twitter-tweet" data-lang="en"><p lang="en" dir="ltr">I respect the DOJ IG office, which is why I urged them to do this review. The conclusions are reasonable, even though I disagree with some. People of good faith can see an unprecedented situation differently. I pray no Director faces it again. Thanks to IG’s people for hard work.</p>&mdash; James Comey (@Comey) <a href="https://twitter.com/Comey/status/1007328935842123777?ref_src=twsrc%5Etfw">June 14, 2018</a></blockquote> <script async src="https://platform.twitter.com/widgets.js" charset="utf-8"></script>

The report faults the FBI as well– and specifically Strzok – for not acting quickly enough upon discovering the Clinton emails on the laptop of ex-Rep. Anthony Weiner in the fall of 2016.

The report says Strzok and others argued that the Russia investigation was a “higher priority” at the time than reviewing the laptop.

“We found this explanation unpersuasive and concerning,” the report said, noting the FBI could have gotten a search warrant in late September but waited more than a month to do so – ultimately revisiting the case days before the election.

Clinton has argued that the announcement contributed to her defeat. But the report suggested that Strzok, ironically, may have acted out of bias for Clinton in slowing down the laptop review.

Based on the Strzok text messages, the report said, “We concluded that we did not have confidence that this decision by Strzok was free from bias.”

In the report, Horowitz also criticized then-Attorney General Loretta Lynch’s meeting, with former President Bill Clinton, on an Arizona tarmac days before the FBI decided it would not recommend criminal charges against Hillary Clinton.

The report said investigators "found no evidence" of an "inappropriate discussion." But it found that Lynch’s "failure to recognize the appearance problem created by former President Clinton’s visit and to take action to cut the visit short was an error in judgment."

This is the most biased report in history. “Error in judgment”? It was “calculated” and “criminal” and there should be indictments forthcoming.

House Oversight and Government Reform Committee Chairman Trey Gowdy, R-S.C., said in a statement the report shows “an alarming and destructive level of animus displayed by top officials at the FBI.”

Other Republican lawmakers commented on the newly revealed Strzok text.

“In Louisiana, we call that bias, we don't call that objective,” Sen. John Kennedy, R-La., said on Fox News’ “Outnumbered Overtime” on Thursday.

Strzok had been assigned to Robert Mueller’s special counsel probe but has since been reassigned. Page later resigned.

In a New York Times op-ed on Thursday, Comey stood by his decision not to recommend prosecuting Clinton over her emails while secretary of state.

“The report also resoundingly demonstrates that there was no prosecutable case against Mrs. Clinton, as we had concluded,” Comey said. “Although that probably will not stop some from continuing to claim the opposite is true, this independent assessment will be useful to thoughtful people and an important contribution to the historical record.”

There are not two sides to this story. This is a simple case of right and wrong, or should I say right and left? The Democratic Party is so dishonest it is becoming second nature and there is no more shock value.

There must be indictments! President Trump has to put an end to this. If Hillary walks away from this unscathed then we have no true justice department and the US may never bounce back from this clear case of criminal misconduct.

very interesting to read comey and gowey comments , may they both have some conclusion to the IG Horowitz s investigation.

Lexy is correct. Enjoyed her putting this piece together.

Sense is that POTUS' hands are tied until Mueller's investigation is complete.

Nobody is safe after that.

Great article- bias so obvious. Un believeable that of all the FBI employees that these few Clinton supporters were the only people avaiable for this investigation

Imo… They have NO CHOICE but to bring charges. If not, they are telling the WHOLE world that our justice system is a JOKE!

WE MUST DEMAND ACTION & DISCIPLINE!!

it proves what we knew all along. The Eff Bee Eye has been rigged with incompetent, corrupt, globalist, 9/11 terrorist filth as has The CIA.

Another damn good article by Lexy.

Made the investigation of Hillary Clinton's emails invalid.

Should end the Mueller probe

Pete S. was deeply involved or lead in both. Due to his documented bias neither is legitimate.

The email investigation must be redone.

The Mueller investigation must end immediately.

I wish Gowdy could prosecute. That would be something to watch