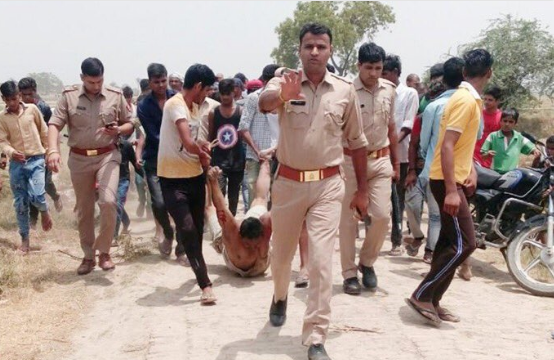 Scandal engulfed the nation of India after a picture went viral on social media (it has since been banned) showing 3 police officers apparently assisting the lynching of a Muslim man who had dared to try and get a cow to leave his land (cows are considered sacred animals in Hinduism, which is the biggest religion in India).

<blockquote class="twitter-tweet" data-lang="en"><p lang="en" dir="ltr">Remember this photo.<br><br>This Muslim man, Qasim shooed a stray cow out of his field &amp; little did he know that blood thirsty Sanghis would kill him for this.<br><br>They kept on beating him in presence of police till he died, while pleading for his life, pleading for a drop of water. <a href="https://t.co/vlsBK9HcAd">pic.twitter.com/vlsBK9HcAd</a></p>&mdash; Jas Oberoi (@iJasOberoi) <a href="https://twitter.com/iJasOberoi/status/1009806056430551040?ref_src=twsrc%5Etfw">June 21, 2018</a></blockquote>

The 45-year-old Muslim man identified only as Qasim had shoved a cow which had entered his field. As rumors over ‘cow slaughtering’ spread in the village, a group of Hindus surrounded him and he the lone man was later killed by a lynching mob whilst begging for his life.

The picture, which has since gone viral, shows that police did not really intervene, but rather helped.

The events took place on June 18th already but the picture of the police ‘assisting’ with the public lynching event was only discovered yesterday.

The chief spokesperson of the state police, Mr. Rahul Srivastava, claims however that the pictures were "misleading" and the "policemen did not support lynching."

"The picture shows that man is being dragged and the policemen are doing nothing about it, but that's not true - the mob just wanted to continue attacking the man and our men were trying desperately to keep them away. However, they should have been more careful in how the man was carried and looked after him better. That is why we have apologised and ordered an inquiry."

Many in India expressed their disgust at the police action. A Twitter user wrote: "The @Uppolice escort provided to the #lynch mob was more worried about being photographed."

"Just look at men in uniform from @Uppolice. Making department proud or bringing in sheer shame is useless to ask when we know how normal it is these days to brutally lynch a random Muslim in the name of a cow."

India 🇮🇳 is a beastly land. That I have been to many times. While there are some amazing, enlightened and wonderful people there. India is mostly a stinking degenerate and fetid shithole. Wherein the people lie with nearly every breath and will rape anything female walking on two legs. They’re violent stupid and brutish. They worship seething hordes of demons in temples that double as houses for charlatans and public latrines.

This whole debacle is sad.

savages on both sides…

The Hindu's have radical Pakistan right next door. Do you think their level of 'intolerance' is somehow unjustified? For thousands of years they have effectively repelled the Jihadis next door that would slaughter every man, woman and child in India given half a chance!

Unless you have been to India, STFU!

Just getting some payback against muslims, hey how ‘bout them Tigers huh?