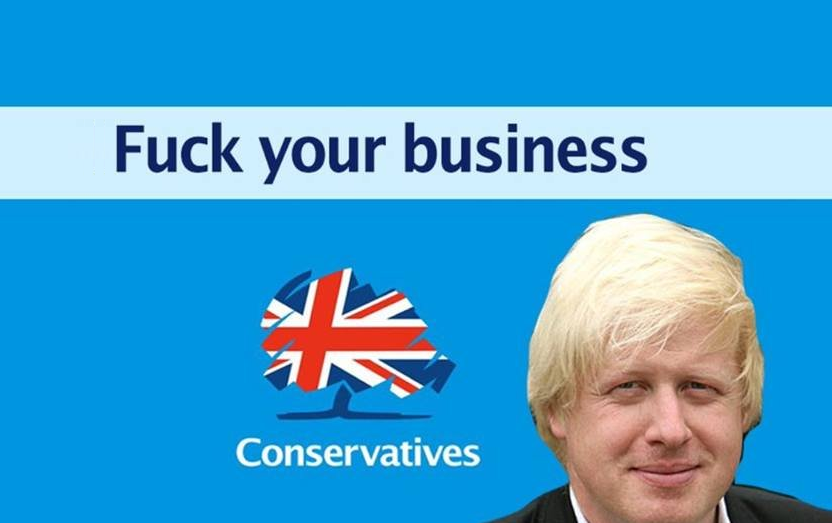 One might think stress is getting to the governing Tory party as it was revealed that Foreign Secretary Mr Boris Johnson exclaimed ‘Fuck business’ when informed about the warnings from British business leaders about the lack of a coherent message on how and when the government would exit from the European Union.

His comments became apparent after the UK boss of German-owned Siemens copied those same warnings by Airbus and BMW (the three companies combined employ some 200,000 people in the UK) about the effect of Brexit on British business and, much more importantly for a political party, on the subsequent loss of jobs.

Various business leaders have been calling for weeks on end to get the government to give them a timeframe so they can draw up plans of what to do.

Of course, doing so would immediately weaken the UK government’s hand in its game of Texas hold’em with the EU commission in Brussels.

Mr Johnson knows this, and so few believe that the Tory party, which has long established credentials as being friendly to the business leaders across the British Isles, indeed meant what he stated.

Because daring to believe that those words are actually what the leading government party thinks about the business interests in their country, now that many in the London City are also considering a move to the European mainland, would leave UK business leaders without any of the major parties caring for their interests. And if that were the case, most of them are quite clear about their reply to Mr Johnson.

<blockquote class="twitter-tweet" data-lang="en"><p lang="en" dir="ltr">Boris Johnson harbours ambitions of being PM, yet he hasn&#39;t got the fucking guts to carry out his threat to resign over <a href="https://twitter.com/hashtag/HeathrowExpansion?src=hash&amp;ref_src=twsrc%5Etfw">#HeathrowExpansion</a>, he&#39;s a gutless coward with zero credibility, just like his boss who hasn&#39;t the balls to fire him, fuck Boris Johnson&#39;s Brexit not business</p>&mdash; Loz Argyle (@ArgyleLoz) <a href="https://twitter.com/ArgyleLoz/status/1011514349519867905?ref_src=twsrc%5Etfw">June 26, 2018</a></blockquote>

In fact, some of the biggest remaining UK employers are past the point where they can still be patient with Prime Minister Theresa May as she decides whether the conservative party will choose for a soft rather than a hard Brexit.

Entering the EU, Britain took the decision decades ago already that it didn’t really care about who owned its big industrial companies, and thus many of those are now already headquartered in France, Germany and Japan. The next few weeks and months are set to become decisive for the manufacturing industry in the British Isles.

Go Boris, tell those globalist Krauts to "Get the Fuck Out" of England now!

Let Boris have a go at it, can’t be worse than Theresa.

I HOPE HOLLAND GOES ALSO OUT OF THE EU WE ARE SICK OF IT I WANT MY COUNTRY BACK!!!

BREXIT GOOD OUT OF THE EU NOW HOLLAND ALSO I WANT OUR COUNTRY BACK BEFORE IT IS TO LATE!!!