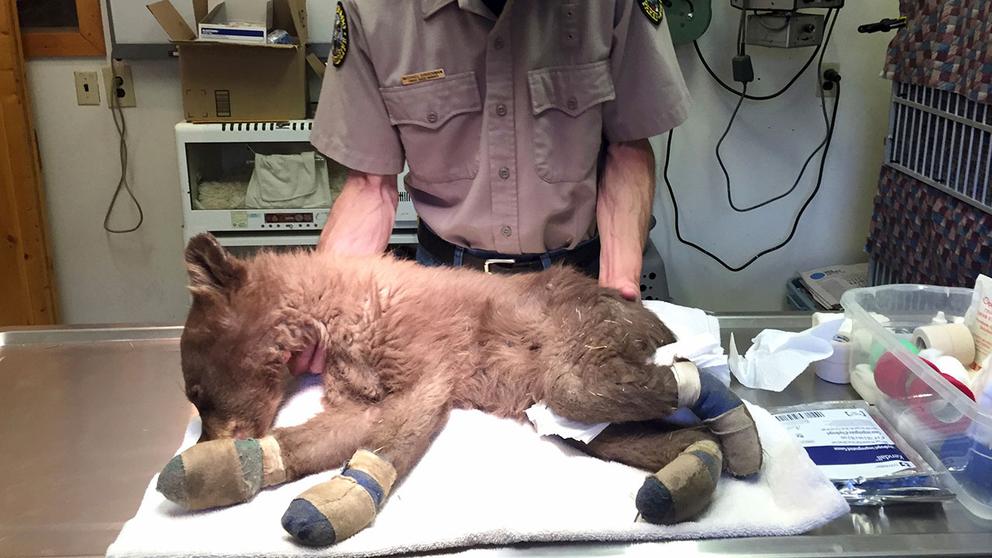 "When the bear was brought in, I wasn't sure if it was going to make it. But she's responding very well to treatment, and by winter we believe we'll be able to return her to the wild."

The news of the bear's likely survival is some much needed good news for the area where half-dozen significant wildfires have been burning across Colorado and much of the Southwestern U.S. The wildfire that nearly claimed the cub's life has burned 65 square miles near Durango in southwest Colorado. Over 2,000 homes in the area have been evacuated but residents have since been allowed to return home.

Another 650 homes were evacuated due to five other raging Colorado wildfires. The fire has claimed some structures in the mountains east of Fort Garland but an official count has not been released. The injured bear weighed about 10 pounds and Wildlife officials believe her to be about 4 or 5-months-old. She was first spotted wandering alone in a burned area by firefighters with no sign of her mother.

The firefighters notified Wildlife officials who found her in a tree and used a tranquilizer dart to take her to a state facility for treatment. Sirochman, the facility's manager, said the burns on the cub's paws were severe and she is being treated with salve, bandages, antibiotics and pain medication. She is also eating solid food and a liquid milk substitute. Caretakers carefully avoid human contact as much as possible to give her a greater chance of surviving in the wild.

The bear cub will be placed in an enclosure with four other cubs at the wildlife facility until she can be released this winter. Sirochman said, "We have good luck returning young bears to the wild. We're very strict about minimizing human contact."

how terrifying wildfires must be for wildlife.