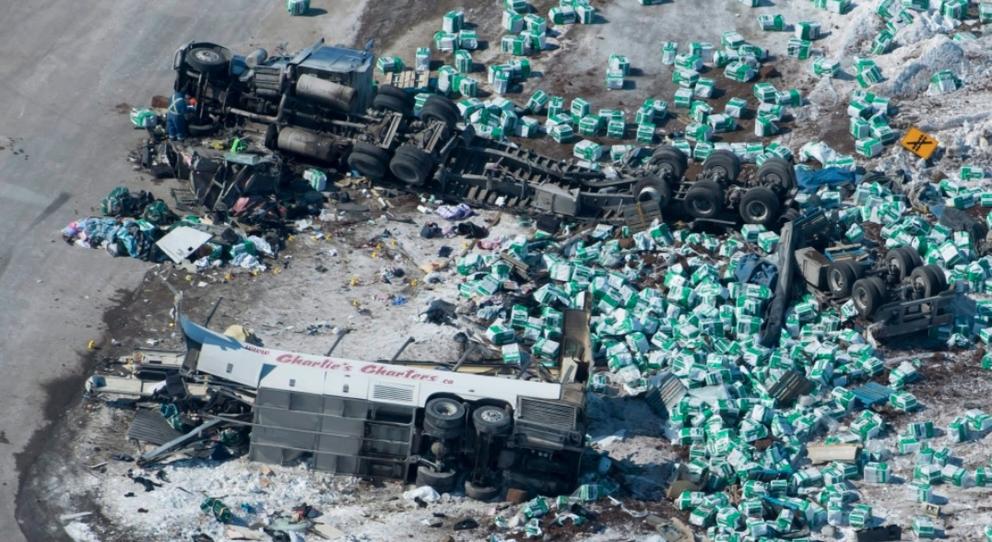 A crash involving a semi-truck and the Humboldt Broncos team bus has resulted in the death of 16 people. The accident also injured another 13 people and the driver of the tractor-trailer was arrested and charged, according to the RCMP. The driver of the truck has been identified as 29-year-old Jasikrat Singh Sidu, 29, and is facing 16 counts of dangerous operation of a motor vehicle resulting in death and 13 counts of dangerous operation of motor vehicle causing bodily injury.

Sidu was arrested at his home in Calgary on Friday morning and taken into custody. He is set to appear in a Saskatchewan court next week. If convicted of dangerous operation of a vehicle causing death, he could face a sentence up to 14 years in prison. A conviction for injuring someone could see him in prison for up to 10 years. A crash survivor and former Bronco named Ryan Straschintzki, "Whatever happened, happened for a reason. His intention wasn't to go out and hurt us that day, but that mistake is obviously going to change his life and changed all our lives."

The Humbolt Broncos released a statement that thanked RCMP and their officers for their work. "Our organization has faith in the justice system and we will be watching closely as this court process plays out," the statement said. "Our primary focus continues to be supporting the survivors, families, and others that were directly impacted by the tragedy on April 6." Sidhu was working for Adesh Deol Trucking Ltd. when the crash took place at an intersection on Highway 335.

An uninjured Sidhu was arrested after the collision on April 6. Curtis Zablocki, Saskatchewan RCMP commanding officer, and the assistant commissioner said, "I know it has been difficult for many to await the outcome of this police investigation. The time it took to do this work — this important work — was necessary." Sidhu received trauma counseling after the crash that killed 10 Broncos players. He entered Calgary on a student visa in 2013 while going to college. Police say the investigation is still underway and have not released their results.