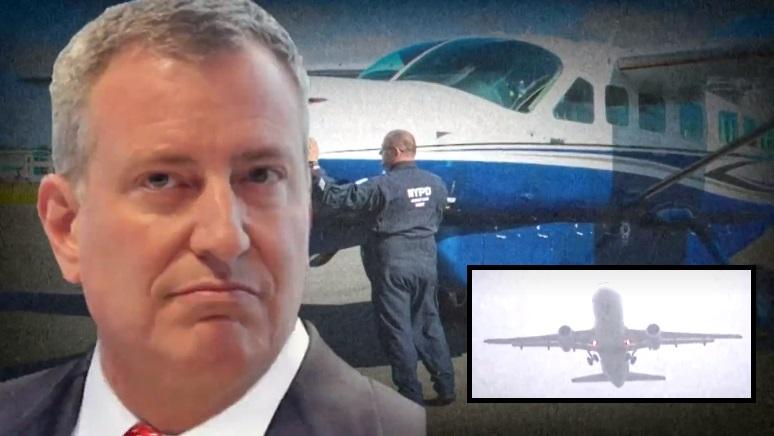 The Mayor of New York Bill de Blasio is under fire for using the New York Police Department's $3 million counter-terrorism plane to ferry himself to and fro including to a Canadian vacation for a street being named in his honor in the Bronx. A former NYPD sergeant named Joe Giacalone said, "This is a bad use of resources. God forbid there’s an emergency somewhere in the city that needs this vehicle, and we have a big problem."

Giacalone added that it is unusual to use the sophisticated and technologically advanced aircraft as a commuter plane. After all, it is equipped with sensitive radiation sensors and other secretive technology. "This is something that I find very strange," he explained. The flight tracker website Flight Aware shows the Cessna Caravan left its hangar at MacArthur Airport and flew to Montreal where he picked up the mayor at 9:09 a.m. on Wednesday before landing at Westchester County Airport at 10:58 a.m.

De Blasio was then taken by car to a renaming of a street ceremony in honor of a slain NYPD Det. Miosotis Familia before being escorted back to the airport and returning to Canada. A City Hall spokesperson declined to comment on the situation saying, "We don’t have a comment on the plane." The NYPD was equally as tight-lipped offering only the standard line, "The NYPD does not comment on the executive protection detail so as not to compromise sensitive security matters."

Sources told CBS2 that a trip on the high-tech plane can cost thousands of dollars in fuel when flying commercial would only cost around $300. "It looks like abuse of authority on the mayor’s part, and the police commissioner is told what to do by the mayor," Giacalone said. A resident of nearby Jackson Heights, Queens said, "I feel that it’s not a good use of resources. I’m a New York City public school teacher, and I think that better resources should be placed in public schools and not for the mayor’s own personal spending."

Yet another resident named Orlando Paulino of Astoria Queens said, "It’s never a good look, especially resources like NYPD. I think we could all use the resources we got." A man said, "You’ve got people out here that need stuff, other things, like maybe let’s say, for instance, fixing the streets. Someone in that position, totally unacceptable." A spokesperson for the NYPD assured the public that the use of the plane did "impact other operational needs" and noted that their department's own helicopters do much the same thing.

Officials would not elaborate on the plane's secretive technology but did say it is often used to scan ships for the radioactive material used to make dirty bombs as they approach the harbor. The ships won't even know they have been scanned by the plane overhead.