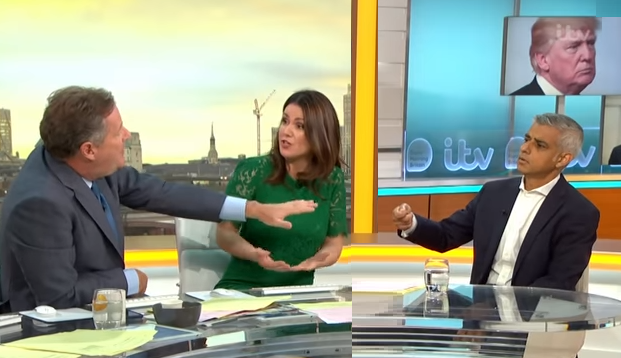 A long-awaited interview in the UK finally arrived as London Mayor Mr Sadiq Khan came on to Mr Piers Morgan’s Good Morning Britain program to discuss the crime spiral in the UK’s capital London as well as the Mayor’s decision to allow a blimp showing Trump as a baby to float above Parliament during the US First Couple’s visit.

During the debate, which was heated at times, the Good Morning host blasted the Labour politician for his decision to allow "the leader of our closest ally to be publicly humiliated", an action which he believes will ridicule the UK in the eyes of the world and stating there was no way he would have allowed a similar balloon showing either Hillary Clinton or Barack Obama to be flown in the London sky during an official visit of either of those as US President.

Mr Morgan, who explains that the timing for insulting the US President is very unfortunate as the UK desperately needs a good trade deal with the US knowing that their Brexit negotiations are going so badly, challenged Mr Khan: "I think there's hypocrisy here.”

"I don't think you would allow in a million years a topless blimp of Hilary Clinton in a nappy had she won to be flown at Parliament.”

Mr Khan hit back, and questioned Mr Morgan’s demands simply because he and US President Mr Trump are good friends: "You know better than that, you're a journalist, you used to be an editor."

"I'm not sure why you are putting aside your longheld views because the guy happens to be your best mate. It's a slippery slope.

Of course, Mr Khan’s allowance of the baby blimp is only the latest spat in the long-running feud between Mr Khan and Mr Trump. Even before it was decided that Mr Trump would come, the Labour mayor issued a thinly veiled warning claiming that there would surely be protests should he decide to visit London.

At the same time that the interview was being held, Mr Trump himself boarded a flight to Europe, saying: “I have NATO, I have the UK, which is in somewhat turmoil and I have Putin. Frankly, Putin may be the easiest of them all.”

Its President Trump, not Mr Trump.

Liberal love freedom of Speech as long as it is their own. When the Conservatives use facts they go bonkers and turn physically violent. Now the Religion of Peace teams with the Liberals which claims to be the party of Peace. Liberals demand PC and Openness. on all issues except how they deal with non-Liberals.

I wonder how the Liberals justify teaming with the more devote radical Muslims that Murder Gays, enslave non-Muslims, rape non-Muslim woman and force them to wear head to toe clothing?

Question explain to me how he answer the question by saying ….

"You know better than that, you're a journalist, you used to be an editor."

No thought is required. Their justification is gaslit into them by powerful people wishing to destroy the United States.

How dare he insult our President. Enough of political correctness at this extreme!

you mean that you still think that 9/11 was done by Muslims with box-cutters? BUSHCO AND JEWISH OPERATIVES DID 9/11.

Piers is pretending to be objective.