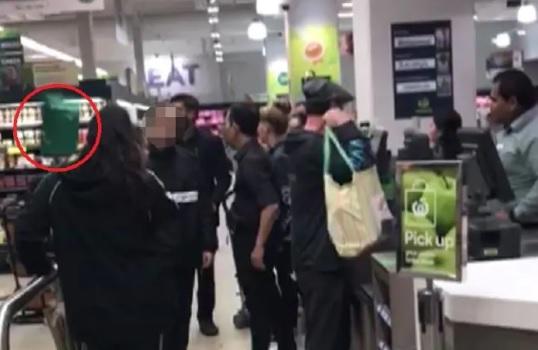 The police in South Wales are searching for a group of shoplifting teens who threw a shopping basket at security officers. The altercation took place at a Sydney inner city Woolworths earlier this week. Surveillance footage captured the incident on video and shows shoppers watching on as a woman shots obscenities at staff and hurls a basket at one.

The video recorded the assailant calling staff "fucking dogs" in a tirade of profanities while onlookers including a woman and her young daughter watch the scene unfold. As the woman screams at the staff one of the group throws a green shopping basket that narrowly misses a store employee's head. Security followed the unruly group outside and requested proof of purchase for the items they walked out with.

Police were called but not arrive in time to catch the offenders. A spokesman for the NSW police said, "Police are inquiring to identify those involved in a brawl at a Chippendale supermarket earlier this week. Around 5:30 pm on Tuesday, July 10, a group of youths were stopped by the loss prevention officer. An argument developed with a female within the group throwing an item at the loss prevention officer. A short time later a brawl has broken out and police were called."

The police spokesman continued, "Two children, aged 14 and 12, were stopped by police and the rest of the group ran from the store. The pair were searched and found to be in possession of the alleged stolen property. The property was returned to the store and the two children were banned from the premises. Later that evening, police were called back to the store after a staff member was threatened. Inquiries are being made to identify that offender. Police attached to Redfern Police Area Command are treating the two incidents as linked and both matters are being investigated."

A spokesman from Woolsworth said, "The safety of team members is our priority and we don’t tolerate abusive behavior in any circumstance. We’ve been in contact with police and the customers are permanently banned from the store. We continue to offer our full support to the team members involved."

Try them as Adults.