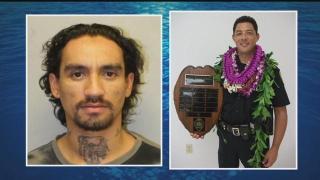 After an intense manhunt that lasted several days, the suspect wanted for the murder of a Big Island police officer was killed in a shootout with police. A police sergeant was also injured in the melee and was taken by helicopter to the Hilo Medical Center where he remains in stable condition.

Big Island Police Chief Paul Ferreira said, "We have been able to bring this nightmare to an end. You can sleep well tonight knowing the search is over for the individual Justin Waiki … who took the life of Officer Bronson Kaliloa days ago." The manhunt came to a close when officers stopped a Toyota 4Runner at a checkpoint set up by police after they received a tip the suspect was in the area.

Hawaii Police Department Maj. Robert Wagner told local news that five people SUV were in the area of South Point, a male driver, three, and Waiki. Wagner said Waiki was "hidden in the very back of the 4Runner, underneath a blanket. The officer checked the very back area of that vehicle, opened up that hatch there, and then Waiki actually emerged and shot the officer. The members of the SRT unit exchanged fire, killing Waiki at that location."

Waiki was killed in the shootout, one of the women in the SUV was shot, and the three others in the vehicle were arrested on hindering prosecution charges and were taken to the Kona police station. Tuesday night, Waiki fatally shot a 10-year-veteran of the force who left behind a wife, two sons, and a daughter.

The family of the fallen officer released a statement saying, "The family would like to thank all the responders who have put their lives at risk to help bring us closure. Our love and thoughts go to the injured officer and his family and we will pray that the Lord protect and heal him."

was his name barrack?