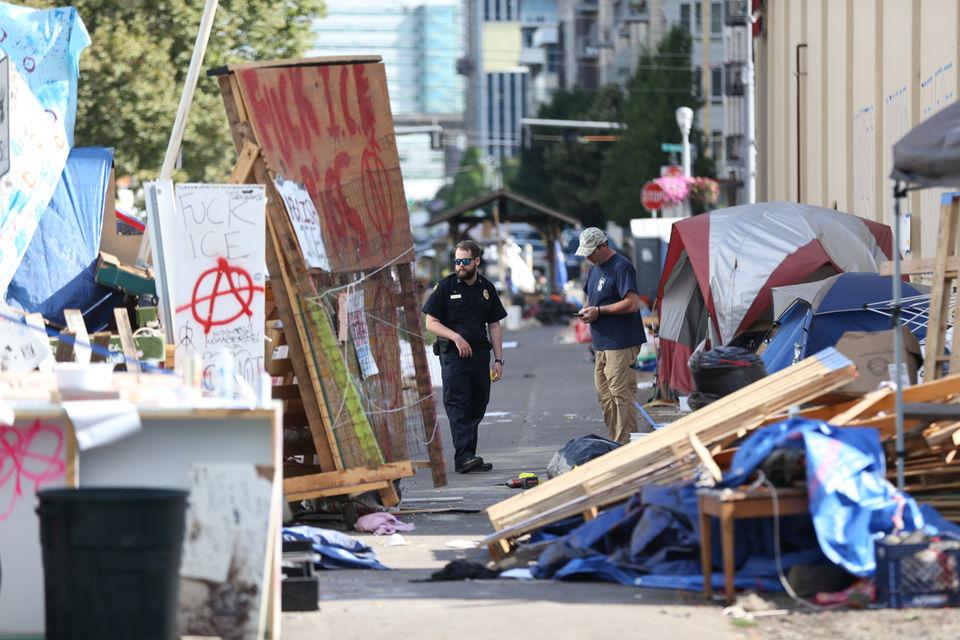 The citizens and community members in Oregon's city of Southwest Portland have had enough of the so-called "activists" harassing their communities. Ever since the #OccupyICE hashtag began trending, radical leftist extremists have been taking to ICE facilities across the country to block the organizations from operating and doing their duty. Wednesday morning, Portland police cleared the last remaining protesters from a shoddy encampment at the Southwest Portland offices of the federal Immigration and Customs Enforcement agency.

The protesters swelled in size to provoke fears that the situation could get out of hand and police were dispatched to control the violence. At the peak of the protests, ICE employees were unable to even go to work because they could not reach their offices due to the protesters surrounding the buildings. The protests lasted five weeks and about a dozen of them were all that was left on Wednesday and even they were forced to leave by authorities.

Aside from preventing community members from reaching their jobs and blocking traffic, protesters left behind a literal dumps worth of trash at their encampment. Portland officers assisted in the clean up near Southwest Macadam Avenue and Bancroft Street. At its peak, the protests swelled to hundreds of members but were quickly met with resistance from officers who formed barricades to protect the federal agency.

Portland Police Chief Danielle Outlaw held a news conference at the site of the protests Wednesday saying, "We knew we had to get ahead of it before it spiraled out of control."

Even the elderly citizens of Portland have had enough of the violent vandals threatening their communities. A 71-year-old man from Portland, Oregon wrote this open letter to the editor of Oregon Live:

<i>Today I heard that one of the food carts near the facility is closing down because the daughter was intimidated and</i> <i>threatened by some of the protesters. Supposedly this was done because she served food to one of the law enforcement</i> <i>officers.</i>

<i>1) I do not understand what they thought they were achieving by the actions they took. Did anyone ask what their position</i> <i>was regarding immigration? Their actions were not the same as the actions taken by the owner of a restaurant when</i> <i>Donald's press secretary was asked to leave.</i>

<i>2) The signage does not help me truly understand what the protesters want to change. The reason I say this is that the</i> <i>changes that need to be made require changes at the federal level. So I would like to know what they are doing to</i>

<i>influence Donald, his administration and the Republican legislature regarding developing a caring, yet realistic immigration</i> <i>policy.</i>

<i>3) If they truly want to make an impact they should be making sure everyone that goes by their area is a registered voter</i> <i>and acknowledge how important it will be to vote in November.</i>

<i>4) By taking the actions they did with the food cart they are playing right into Donald's hands. As Michelle Obama is quoted</i> <i>as saying "when they go low we need to go high."</i>

<i>5) If they truly believe in what they are protesting, they need to include the optics of their actions. We need a coordinated</i> <i>approach to solving the immigration issues.</i>

<i>6) Finally, they need to go to the owners of the food cart, reimburse them for any damage and ask them to stay, as they</i> <i>help the homeless.</i>

<i>If major changes are not made in the November election I do not believe we will continue to be a nation that stands behind</i> <i>its values.</i>

Portland is a leftist pos. they deserve what they get.

Mike Cooper was just pissed that he couldn't get a sammy while he engaged in the block ICE shitshow.

I know who is going to be pissed. The parents of these snowflake protesters who live in their parents basements. Those are the ones who I feel sorry for!

Wow! what an idea ! What a thought ! Superb .. Amazing
[url=https://parajumpers.francarrilloguerrero.com]parajumpers sale[/url]