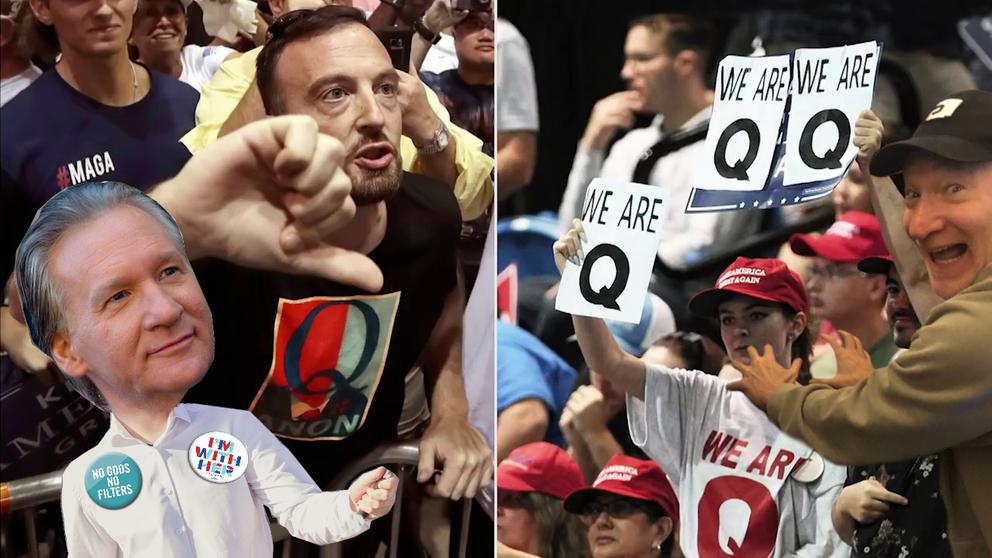 The notorious accused racist, and of course, liberal; the host of HBO’s “Real Time,” Bill Maher… confessed on his show Friday night that former intelligence community members are the “Deep State,” even suggesting that they should “win the Time Magazine ‘Man of the Year’ label,” before going on to attack Trump supporters as attendees of “Nuremberg Hillbilly Rallies.”

“You know that it is 95 days until the election? So, clear your calendar,” Bill Maher said. “And the voting systems are more insecure than the President.”

“Hee hee hee [Maher’s cringe-worthy laugh begins]. Now I have to say, our President has always been unhinged, and I have to say, in the last month? He did not get more hinged,” Maher says, prior to the applause lights coming on to get the audience to laugh at his unfunny rhetoric disguised as a joke.

“Did you see this week? He held two of his Hillbilly Nuremberg rallies,” the disgraceful mockery of a comedian added, further imploring Americans to vote Republican, as the liberal elitist California audience begins to cheer in applause.

“I mean uh, it's scary to people in this profession,” Maher said. “He calls the media the enemy of the people. Except, of course, for Fox News. They're so far up his ass they're the ‘enema of the people,’” Maher adds, with the first actual joke of his monologue.

The reality is that the people of this country, not just the 45th President of the United States of America, <i>simply do not trust the media</i> Bill Maher; and for the most part, that includes Fox News or any other mainstream news outlet.

That's because they refuse to cover important stories, such as the fact that<a href="https://nypost.com/2007/10/01/hillarys-30000-fans-are-her-cult-following/"> several members of the Clinton Global Initiative</a>, <i>ran by Bill and Hillary Clinton,</i> are currently on trial in the Eastern District of New York as part of the NXIVM pedophile sex cult.

The DOJ says that the NXIVM pedophile cult purchased a private island in order to engage in the sex trafficking of children for the NXIVM cult, and even branded women with hot irons, who were kept as “slaves.”

We don't expect to hear HBO or Bill Maher mention the fact that high ranking Democratic Party elitists, including their donors, are on trial for racketeering and child sex trafficking, though; <i>as it simply wouldn't fit the narrative</i> of the left wing “premium” dinosaur television station.

“We live in a world now where reporting reality gets attacked, because it threatens <i>the fantasy created by the cult leader,</i>” Maher says, in an apparent jab at “QAnon,” and the millions of anons on 8ch.net, 4chan.org, Reddit, Facebook, and even Twitter; all of who have united under the mantra of defeating globalism, and outing the lies of the mainstream.

Maher continued his assault on President Trump throughout the show, even going as far as giving praise to, <i>and naming several former Obama Regime and intelligence community officials</i>, who he says is the “Deep State.”

“The last thing that I must report to you, I don't want to, but this happened this week, and it was kind of a big story,” Maher said. “I learned a new word, I didn't want to, but that word is ‘QAnon,’ a lot of people wearing these t-shirts.”

“There, look, ‘Q,’ and ‘We're with Q,’ Maher says, attacking the online movement of anonymous researchers, and the shadowy group, if not single figure, known as “QAnon,” who posts on the anonymous message board 8ch.net (which shares the same ownership with The Goldwater, for transparency to our readers), in what seemed to be an effort to attack the millions of people following “Q,” in their support of President Trump.

<span style="margin-top:15px;rgba(42,51,6,0.7);font-size:12px;">One of the more inspiring QAnon posts for me will always be this, showcasing how the movement has inspired unity in the fight of good versus evil.Credit:<a href="8ch.net/qresearch/"> QAnon on 8ch </a></span>

If you're reading this, you likely already know about the “QAnon” phenomenon, and you certainly know that most of us on social media support the movement, if not for “QAnon” alone, but because “The Great Awakening” has influenced millions of Americans by <i>redpilling the masses</i> in a way we've never seen.

When the likes of Bill Maher begin to attack this, it tells us one of two things:

One, <i>it's happening,</i> and they're undoubtedly in fear of Americans waking up to the injustice for the ruling class, and the corruption of the elites including the intelligence community.

Two, regardless if you support or follow “QAnon,” you simply cannot doubt the fact that <i>millions</i> of people have become informed on major scandals as a result, whether it be FISA abuses of the Obama regime and formerly corrupt Department of Justice; the ongoing and seemingly endless “PedoGate” problem entangling countless elite members of the Democratic Party, including globalist RINOs, although there are far more liberal elitists who seemingly push the normalization of pedophilia; and the outright executions that are seemingly carried out by assassins against those who endanger high-profile globalists, Democrats, or powerful banking elites, even having likely been behind the assassination of John F. Kennedy.

These are realities, Bill Maher, as you will soon see.

Countless Hollywood liberals, powerful donors, and even politicians; <i>all have been outed in recent months for their pedophilia-laced comments in the past, or their own sexual abuse histories as predators</i>.

There's no denying that there's a trail of bodies surrounding the Clinton family, with countless deaths of men and women who were investigating the former President or his wife.

As well as, evidence coming to light to show that there was indeed “meddling” in the 2016 elections; and it came from the top-down, with Barack Obama ordering his minions in the intelligence community to cooperate with the Hillary for President campaign in both sharing intelligence, and devising a comprehensive ploy to wiretap, track, and monitor Trump campaign associates in order to prevent his ascension to the Presidency.

This happened, and it's undeniable.

Not only have these individuals, often deemed the “Deep State,” attempted to prevent Donald Trump from winning the election, but they've since participated in a joint-effort to dethrone our duly elected President from the highest office in the land; in a well-coordinated campaign of propaganda, deception, and overreach of the Mueller probe.

Bill Maher and the liberal elites can attack Trump supporters as “hillbillies” all they like, and continue to denounce “QAnon” if it makes them feel important, but what it does not do, regardless if you believe “QAnon” or not, <i>is change the facts surrounding the brilliant research that has come to light by the ‘anons’ and independent journalists,</i> of which many deserve a Pulitzer Prize for their work and research efforts.

No, Bill, <i>justice is coming,</i> and I assure you, you won't be laughing when the “Deep State” you praise is in handcuffs.

It doesn't matter if you follow Q, as I've said before, if you support our values, you shouldn't try and shut down the opinions of others, but instead debate them.

There are people who continue to attempt to censor free speech, even those who are supposedly supporters of the President.

<i>Which is why I have to address the following issues.</i>

One of those such places is known as “The_Donald on Reddit,” who long ago blacklisted our website, <a href="https://thegoldwater.com/"> The Goldwater</a>, from being able to be posted on their subreddit, over a story about a transgender pedophile who molested a child, or so they claimed at the time, but we haven't made an effort to post there in nearly a year, as they continued to silence stories about pedophiles, and other work from The Goldwater.

Recently, another writer from The Goldwater, as some of you may be following on Twitter, <a href="https://twitter.com/PoliticallyRYT/"> Lexy</a>, wrote a masterful series on <i>The Clinton Body Count</i>, and she later went to “T_D” to try and post her article, only to be denied.

She messaged the mod team to find out why they wouldn't let her post her story.

The response she was given is as follows, with r/The_Donald’s mod team accusing our website of being <i>”conspiracy-based”</i>, saying that because we support “QAnon” they won't allow us to be posted there.

While I don't want to detract from the storyline here, <i>it's good that people know and understand there is controlled opposition</i>, so that it can't be used against our President in 2020.

Also, the stories we report are far more researched than the mainstream media, and our readers know that The Goldwater is 100% sourced in every article we write.

I'm a collegiate, who's studied American Politics, International Relations, Comparative Politics, and Public Policy, as well as my Applied Master’s degree program in American Politics and Policy (MAAPP), and I assure you, I spend sometimes tens of hours, if not days doing research for the stories I'm writing.

<i><b>We are what journalism truly looks like, at The Goldwater.</b></i>

Lexy is extremely talented, and for her hard work, which she spends countless hours studying and taking notes prior to writing, she is shunned by The_Donald? That's insulting.

Again, why does r/The_Donald have a problem with millions of people on Reddit, Facebook, Twitter, 8ch, and 4chan.org <i>uniting and performing research together</i>, in order to find the facts to help our President?

If they have a personal bias against “QAnon,” which they apparently do, that's their right to disbelieve in the movement. Absolutely.

However, you're shunning brilliant Trump supporters at the same time.

I don't expect much from r/The_Donald, and while there is absolutely no doubt it played an important role in the 2016 elections on Reddit, they've now become everything they once claimed to stand against.

Not to mention, the fact that<a href="https://www.wired.co.uk/article/reddit-edit-post"> Reddit CEO Steve Huffman </a>edited users comments on the subreddit, which we fully stand in opposition to, and stood up for r/The_Donald when that happened, only for them to now denounce us.

Regardless of those past efforts, how does this type of censorship of "QAnon" make the r/The_Donald subreddit any different than Bill Maher? Answer this question, please, I implore you.

As an “old school” anon from 8ch, I've always joked about “Plebbit,” or “Leddit,” a meme once used to describe the mindset of Reddit users; but today, as per “The Great Awakening,” but now there are places I still frequent, such as r/GreatAwakening, who continue to stand firmly behind the <i>”Where We Go One, We Go All”</i> mantra of the “QAnon” movement.

As I said, there are pro-”QAnon” subreddits which aren't infiltrated, and they aren't going to be I silence “QAnon” posts on<a href="https://redd.it/91y7o1"> r/GreatAwakening</a>, that much is certain.

Know that there is a coordinated effort to silence the research of millions of people in the “QAnon” movement, and the divide and conquer tactics of those who claim to be on our side, as well as the Democratic Party’s elite, seem to be working in unison.

Billy or Bowel Movement Billy is pure garbage and should be avoided like the piles of shit all over the cities of CA.

Bill Maher……. Another one with his head up his own

Maher will look funny with his balls nailed to his forehead, he is a straight up traitor.

will never watch him ever again

Had to stop Watching about one minute into mathers mind numbing spew, it's all I could stand! Who in their right mind thinks this traitorous creep is funny? He's definitely a clown though! I can't wait until all of America has woke up and creepy people like mather won't be able to show his face! I'll bet anything he's a pedophile and queer!

Trump buttlickers will get their comeuppance

Maher is shooting straight despite the writer's feeble attempts to mock and discredit him.