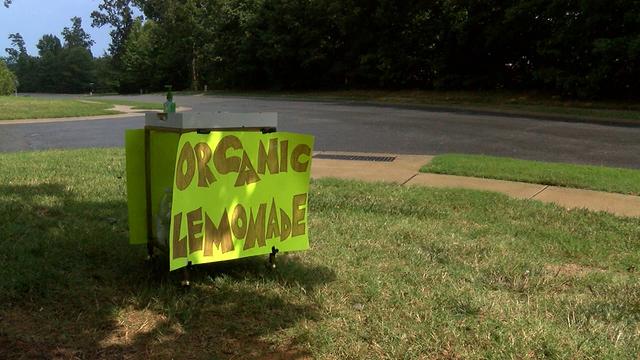 Sheriff's deputies are searching for a man who robbed a 9-year-old boy running a lemonade stand at gunpoint in Union County. The robbery took place Saturday afternoon around 3 p.m. in Monroe, North Carolina. The boy's father, Phillip Smith said, "Never had an incident like this, never thought this would happen."

Deputies responded to a report of a teenager putting a handgun up to a 9-year-old boy's stomach and demanding money in the quiet St. John's Forest neighborhood. Tony Underwood with the Union County Sheriff's Office said, "I think people are capable of a lot of things, but not robbing a child at a lemonade stand, that takes it to a new level."

"It's pretty low, despicable in my book and I can't believe someone would stoop that low to steal money from him," Smith said. He also told local news channel FOX 46 that the suspect got away with $17. The boy had been setting up his lemonade stand every weekend in a round-a-bout in his neighborhood in order to save up for a new lawnmower for his lawn care business.

The boy and his family are determined not to let the robbery deter him from selling lemonade and within 24 hours his stand was back in business. "We are being resilient and he came out here to sell some lemonade today just to be back at it and taking out time to process everything that happened," Smith said.

When it came to answering his son's questions about why the robbery happened, Smith said, "We kinda explained it to him that bad things do happen to good people and you never know when it's going to happen to you. You just gotta pray and be glad that he is safe." Police say they recovered the boy's metal tin, a camo hat, and a black BB gun in some nearby woods and are asking neighbors for any surveillance footage that may have caught the suspect on video.

I hope they catch that bastard and hang his ass! He should get the death penalty! What good is a piece of crap that would pull a gun on a kid going to be to society?