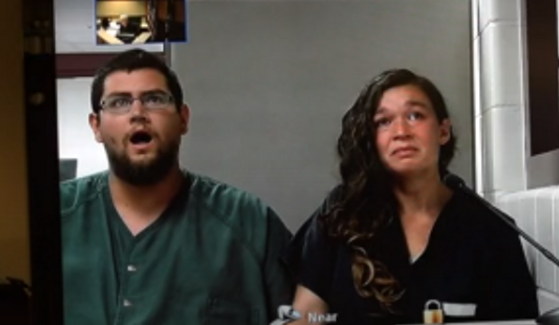 Conservative Christian parents who ‘relied on God’ and dismissed doctors as 'priesthoods of the medical cult' reacted in shock as they heard the murder charges brought against them after the death of their 10-month-old daughter.

First responders found young Mary with sunken eyes and cheeks in her crib after Mr Welch had called 911 stating that he had found his child dead. An autopsy revealed that her cause of death was “malnutrition and dehydration due to neglect by adult caregivers.”

Mr Welch and Ms Fusari, were at first just brought in for questioning during which they admitted that their daughter was quite skinny and underweight.

Court documents show that the parents declared at that questioning that they had not sought medical help “for fear of having Child Protective Services called, lack of faith and trust in medical services and religious reasons.”

Mr Welch had often posted on social media about a distrust of doctors and his religious beliefs saying “God is sovereign over disease.”

The fence in front of the Welch home had a sign saying: “Repent. Believe. Obey.”

Mr Welch also declared that vaccination was wrong as it interfered with the survival of the fittest: “It didn't seem smart that you would be saving people who weren't the fittest.”

“If evolution believes in survival of the fittest, why are we vaccinating everybody? Shouldn't we just let the weak die off and let the strong survive?”

The couple has two older children together, aged 2 and 4. They have currently been placed with their grandparents.

They should have moved to England where the Government has made it legal to kill treatable children.

Further proof that there's no such thing as 'God', and anyone who believes in that concept is an idiot.

You left your fedora on your way out of reddit.com be more careful lad!

christcucks are retarded, but at least they're not vaxxcucks. I guess the mother didn't breastfeed enough?