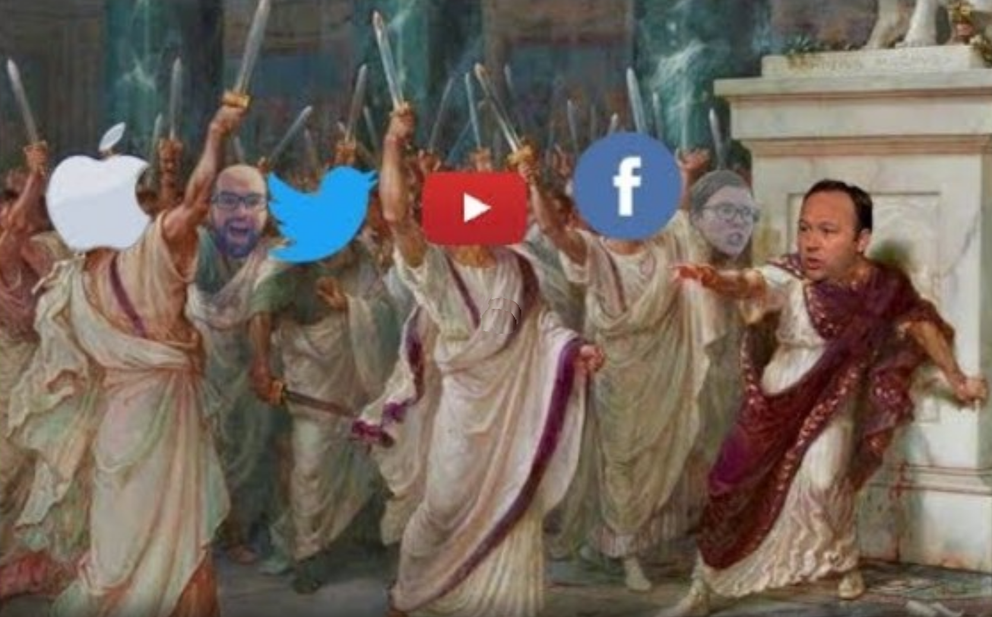 A few months ago, we published an article about the train and taxi strikes in France. Given the fact that people still needed public transport, many over-40 French commuters from surrounding cities needing to get to the so-called ‘île-de-France’ (the communes surrounding the capital Paris where the heart of French economic activity is located) discovered for the very first time apps like Uber, Lyft, Blabla-car (it’s a real thing) and Wayz. All these apps offered discounts during the strikes.

Ever since then, their growth in France is unstoppable and public transport falls back further.

Just like in France in the spring, it would seem that ever since provocateur and conspiracy theorist Alex Jones was removed in a clearly colluded and well organized manner on Monday by the various social media platforms and streaming services of Youtube, Apple, Spotify and Facebook, users and followers of his (as well as many other conservative voices who simply disagreed with such a move) have discovered new companies, which have all risen to new heights since.

I must admit, just like many others who have since written about Mr Jones, I am not a fan, but the combined censoring of Mr Tommy Robinson in the UK, Mr Alex Jones in the US and now Mr Blair Cottrell in Australia sets a dangerous precedent, and it is understandable that people fear their freedom of speech will be attacked.

<blockquote class="twitter-tweet" data-lang="en"><p lang="en" dir="ltr">Anyway all this discussion about the banning of Alex Jones, distasteful though he may be, is moot. The horse is out of the barn. Censorship will become so commonplace in the social media cesspool going forward, we will barely remember life as it was before the purge began.</p>&mdash; James Woods (@RealJamesWoods) <a href="https://twitter.com/RealJamesWoods/status/1027210909176000512?ref_src=twsrc%5Etfw">August 8, 2018</a></blockquote>

Furthermore, the Quality Filter Ban recently installed on Twitter just adds to the social fabric being controlled and the interactions between humans in the developed world which are now being mostly controlled by Silicon Valley.

As even the opinion pages of USA Today admitted earlier this week, and I quote, “censorship will only make Alex Jones a martyr among his fan base.”

Mr Jones, who used to have 2.5 million subscribers on his Youtube channel, is already encouraging his followers to stream his content directly. His followers have discovered sites like Bitchute and Real.Video for streaming.

Remember another example. Mr Milo Yiannopoulos, another rightwing provocateur wanted to speak on the campus of the University of Massachusetts for a few hundred listeners and was subsequently blocked by left-wing protesters.

As a result, 2.5 million people ended up watching the video of his speech online.

Whenever you make something exclusive or ban something, more people will want to see it. Censorship will come back to bite the social media giants in the ass. Knowing now that Google tracks you, people discover Duckduckgo and Yandex.

Twitter puts a Quality Filter Ban on conservatives, they flock to Gab.ai

The social media execution of Mr Jones in a span of 12 hours by Silicon Valley will result in their own downfall as more and more people will learn that there are indeed alternatives, and they are on the rise.

Lastly, the picture above this article was brought to you by the fanbase of Sargon of Akkad and show the stabbing of Mr Jones by the social media giants and two Democratic senators.

It is based on a historic painting showing the stabbing of Julius Caesar by 23 Roman senators. As stated on HistoryPod: “his death resulted in a period of instability and civil wars that culminated in the ascendancy of his adopted son Octavian who became Caesar Augustus, the first Roman Emperor.”