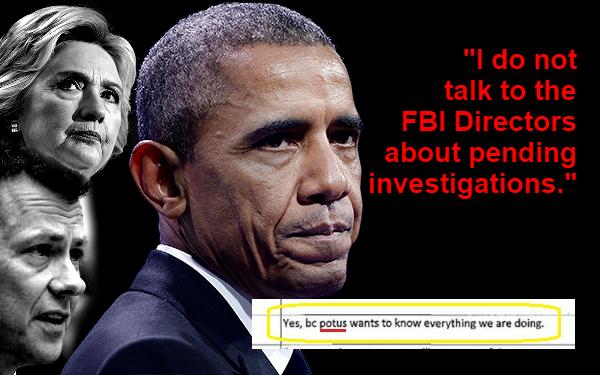 Is that the same line that disgraced FBI agent Peter Strzok spoke of numerous times when he was questioned by the House Intelligence committee? The same line that Strzok vehemently denied crossing despite his thousands of text messages showing a political bias? It seems so. Thanks to the release of Strzok's text messages, we now know that Obama, in fact, did inquire with then FBI Director James Comey to be kept in the loop with the Clinton investigation. What happened to not talking with FBI directors about ongoing investigations?

Again, eight months later in December 2016, Obama specifically said he stays out of the FBI's investigations. "One thing that I have done is to be pretty scrupulous about not wading into investigation decisions or prosecution decisions or decisions not to prosecute. I have tried to be strict in my own behavior about preserving the independence of law enforcement free from my own judgments and political assessments."

Related coverage: <a href="https://thegoldwater.com/news/33284-Clinton-Body-Count-Series-9-The-Boys-On-The-Tracks">Clinton Body Count Series: #9. The Boys On The Tracks</a>

So here we have Obama again denying any involvement and "guaranteeing" that the Clinton investigation will be treated impartially and she will not get special treatment. Yet, that is exactly what happened. A text message from Peter Strzok to FBI lawyer Lisa Page revealed that Obama specifically requested to be kept in the loop regarding the Clinton investigation and was talking directly with then FBI Director James Comey.

When the FBI announced it would not be bringing charges against Hillary Clinton over her mishandling of classified information, Obama told reporters, "I think it's inappropriate for me to second-guess or comment extensively on the conclusion that they arrived at." Well, we now know that not only did he request to be kept in the loop regarding the investigation but the FBI director and other top DOJ officials but he likely had a hand in the decision to change the wording of the Attorney General's report so that Clinton could not be prosecuted under the Espionage Act.

The lake of fire is the ultimate judgment on anyone and that's where obummer's lying butt is headed unless he does some major repenting! Did he say anything that was honest in that interview? He must have taken classes from the clintons and bushes on how to lie!

C'mon, seriously! Does anyone believe a word spoken by the previous 4 presidents? Once that phrase "New World Order" was jockeyed out of Bush 1 we were headed for trouble. 28 years of puppets in charge trying to destroy our Republic. The country is now under leadership that pisses off the " New World Order" and the rats are a scurrying.