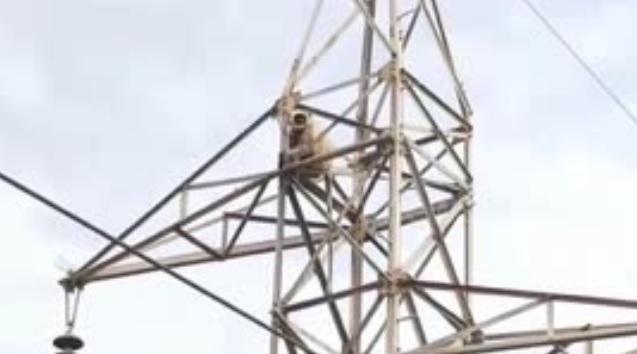 Onlookers in India were shocked to see a monkey had scaled a 100-feet transmission tower. The real shock came when the monkey leaped 100-feet from the top of the tower and successfully landed on its feet without injury.

Somehow, the athletic monkey was uninjured after landing from the 100-feet distance and ran toward a nearby forest as the crowd who had gathered to witness the spectacle cheered. Before the monkey made the terrifying leap, people of the Khadiya village near the heritage city saw a langur monkey atop a 160-feet tall power transmitter.

Onlookers noticed the monkey had a long rope around its neck and were concerned that it may be electrocuted if it came in contact with the live wires transmitting 11,000 volts. After trying to lure the monkey down by offering bananas and nuts but it refused to respond to the bait.

Village head Jitendar Kumar said, "The langur climbed the transmission tower on Sunday. Later, we found that its neck’s rope was stuck in the tower and it couldn’t escape." The villagers reported the situation to police who called for the help of an animal rescue organization.

Three volunteers of the Wildlife SOS organization climbed the tower but as they began to scale the tower the monkey frantically struggled and managed to free itself before taking the monstrous leap. Local police spokesman Prashant Tyagi said, "Power supply was cut for over three hours to help experts rescue the monkey."

the monkey escaped its captor and risked death to make sure it didn't get tied up again. good for him. humans suck.

>>34306 tab, that's the first time I've ever agreed with you in here. I fucking hate humans

Could we get that in metres, please?