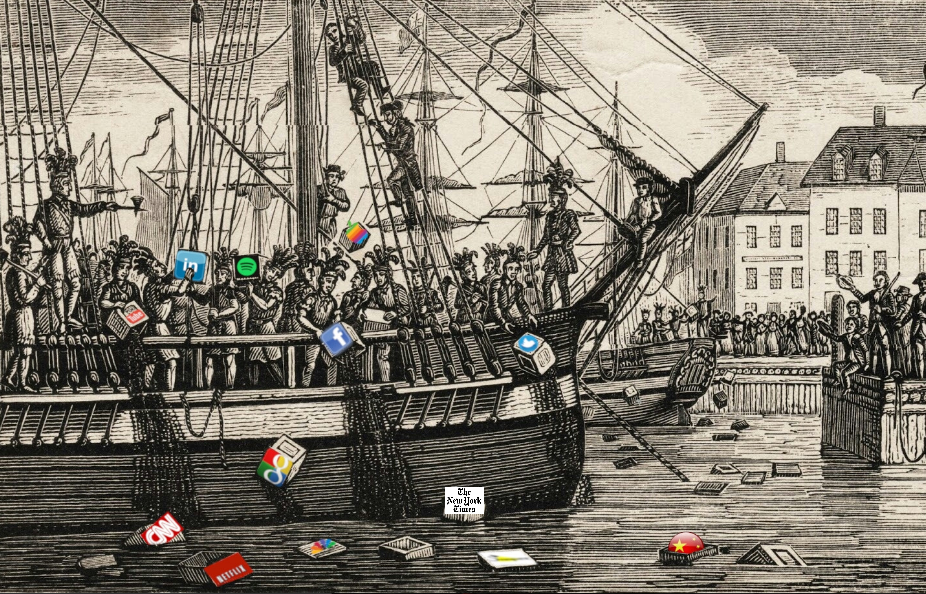 Just as US President Donald Trump is going on a Twitter storm against social media today, so am I calling this moment a turning point in US history. Yes, I am calling it. The New Mexico compound reporting by the US mainstream media will in my view be the death knell that most of the old adage press were waiting for to be replaced by new media (like yours truly).

In her book ‘Dark Money’ about the rise of right-wing politics in the US, New York Times journalist Ms Jane Mayer correctly recalled that the 2009 Rick Santelli rant against then President Obama’s housing bailout plan (Mr Santelli stated: “how many of you people want to pay for your neighbours mortgage that has an extra bathroom and can’t pay their bills. Raise your hand. President Obama are you listening?) was the birth moment of the Tea Party movement against government regulation.

Just as then, it is today my firm belief that the New Mexico compound reporting by the same mainstream media that launched a 300-strong editorial against US President Donald Trump last week has set itself up for replacement by new media in doing so.

To use Mr Santelli’s words, I would therefore like to ask: how many of you people believe that 5 Muslims with extremist religious beliefs armed with multiple guns (for which they had set up gun ranges) in combination with 11 malnourished children they were preparing for … let’s say ‘something’ are not dangerous? Raise your hand. Mainstream media, are you listening?

The entire social media out there knows that you had a bunch of terrorists on home soil (and I don’t hear any SJWs contradicting me on this), yet if I read the reporting by the Washington Post, the New York Times, MSNBC or CNN about it, we should be more worried about the judge that set them free on a $20k bail.

Luckily this also means that this will be recognized as the moment the US population understood most of the ‘old’ media could not be trusted anymore and websites like thegoldwater.com will only grow no matter how many ‘quality filters’ Silicon Valley installs on our social media outlets, or as US President Donald Trump just stated, no matter how much social media discriminates against Republican / Conservative voices.

<blockquote class="twitter-tweet" data-lang="en"><p lang="en" dir="ltr">Social Media is totally discriminating against Republican/Conservative voices. Speaking loudly and clearly for the Trump Administration, we won’t let that happen. They are closing down the opinions of many people on the RIGHT, while at the same time doing nothing to others…….</p>&mdash; Donald J. Trump (@realDonaldTrump) <a href="https://twitter.com/realDonaldTrump/status/1030777074959757313?ref_src=twsrc%5Etfw">August 18, 2018</a></blockquote>

Over in Germany, the governing parties have often wondered when was the exact moment that voters decided to ditch the mainstream and try out the anti-immigrant and Eurosceptic AfD. I believe that the ‘old’ media’s understanding of Chancellor Angela Merkel’s wish to deliver biased reporting in the aftermath of the 2015-2016 new-year’s eve celebration mass sexual assaults in Cologne was that moment.

<blockquote class="twitter-tweet" data-lang="en"><p lang="en" dir="ltr">…..Censorship is a very dangerous thing &amp; absolutely impossible to police. If you are weeding out Fake News, there is nothing so Fake as CNN &amp; MSNBC, &amp; yet I do not ask that their sick behavior be removed. I get used to it and watch with a grain of salt, or don’t watch at all..</p>&mdash; Donald J. Trump (@realDonaldTrump) <a href="https://twitter.com/realDonaldTrump/status/1030779412973846529?ref_src=twsrc%5Etfw">August 18, 2018</a></blockquote>

For a week or so after the events, the mainstream media failed to talk about the religious background or ethnicity of the perpetrators as it wouldn’t be ‘politically correct’.

<blockquote class="twitter-tweet" data-lang="en"><p lang="en" dir="ltr">….Too many voices are being destroyed, some good &amp; some bad, and that cannot be allowed to happen. Who is making the choices, because I can already tell you that too many mistakes are being made. Let everybody participate, good &amp; bad, and we will all just have to figure it out!</p>&mdash; Donald J. Trump (@realDonaldTrump) <a href="https://twitter.com/realDonaldTrump/status/1030781399920455681?ref_src=twsrc%5Etfw">August 18, 2018</a></blockquote>

I urge you to read the facts about New Mexico and then make up your own mind.

President fire all of the MSM open a news media that tells the truth. Americans need to hear all the truth .dont hide anything

Censorship is evil. Twitter suspended me for several reasons. The main reason is that I told the truth about Islam. "Islam is a religious justification for terror" - This is factual and I can back it up.

Bravo and well stated. It's time for some "YUGE" changes in the online landscape - past time, actually. More so, the MSM needs to sink into that swamp so deep they can never surface again - IMHO.

An Aussie politician dared to talk about the problem of savageislamist flooding Australia and prettymuch the entire media apparatus went into full reeeeeee sjw virtue siggin hug-A-Terrorist- mode like we see being done to Trump and conservatives on a daily basis.This media collusion is global.

I think the voting public should be asked to vote to penalize the MSM for spreading lies to the ignorant public,especially their own leftist followers.Allow a vote to punish the MSM under a law I know exists somewhere.Come on Feds,do your job.