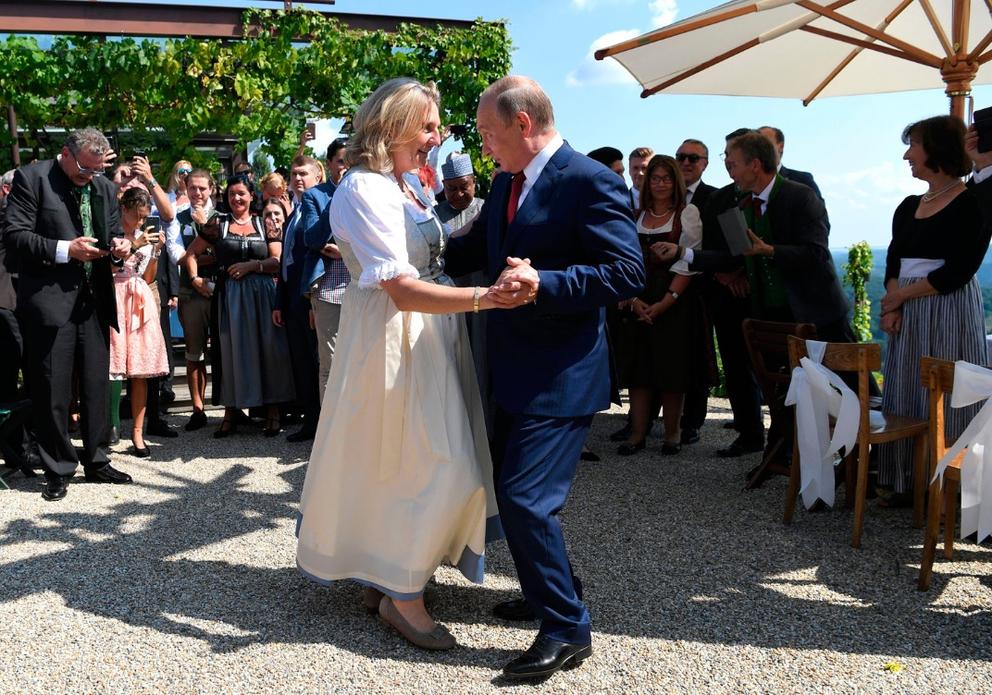 Karin Kneissl, the Foreign Minister of Austria, received a dashing bouquet of flowers from Vladimir Putin at her wedding today. The surprising invitation to and the attendance of the Russian President has some European politicians up in arms. Tempers flared as photographs were released of the two dancing.

That wasn't all that Putin brought for Kneissl's wedding; the Russian president also brought multi-millionaire groom Wolfgang Meilinger the Kuban Cossack Choir for entertainment. Kneissl wore a traditional Alpine dress called a dirndl and Putin donned a navy-blue suit and a burgundy tie.

Putin's arrived in a convoy despite rumors that he would arrive by helicopter. Also riding with Putin was Margot Klestil-Löffler, the former first lady of Austria and a former ambassador to Russia. The bride and groom would eventually leave in a horse-drawn carriage like a scene out of a fairy tale.

The Russian president also signed a Volkswagen Beetle belonging to the newly married couple and framed his words with a heart to show that even Vladimir Putin has a soft spot. After about an hour and twenty minutes, Putin took his leave and head to the Graz Airport to be able to make a Saturday evening meeting with the German Chancellor Angela Merkel.

Before deporting, Putin offered his blessing in the form of a Russian wedding expression "gorko!" The phrase that is meant to bring the bride and groom to kiss and also to bless the rest of the day. Other prominent politicians in attendance were Austrian Chancellor Sebastian Kurz, as well as Heinz-Christian Strache, vice chancellor, and leader of the country’s Freedom Party.