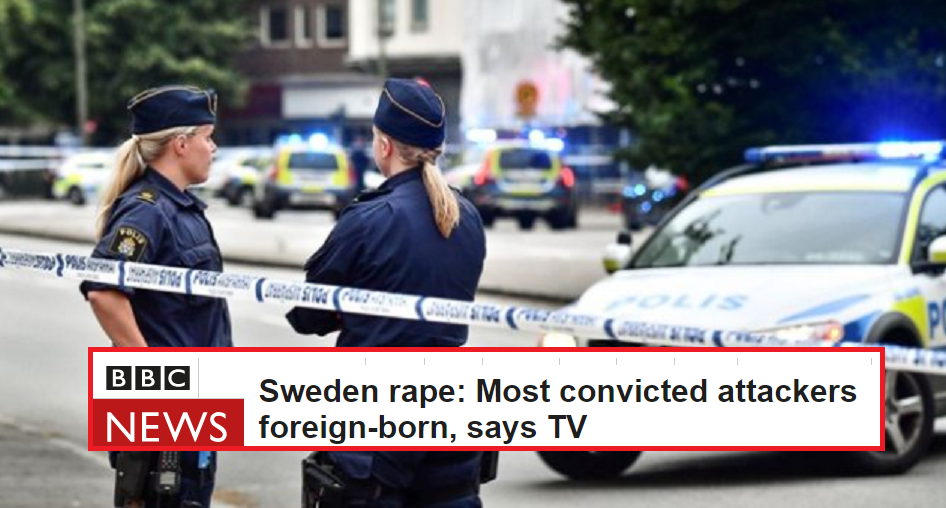 Sweden counts down to its elections on 9 September. As one of the European ‘ultimate democracies’ where citizens are interested in politics and have a say in everything, the TV is covering the elections on a daily basis. Given that the Eurosceptic anti-immigrant Sweden Democrats are riding high in the polls and most Swedes admit they worry about crime, public broadcaster SVT tackled a peculiar problem yesterday.

It had counted all court convictions to present a complete picture of Swedish rape cases.

This data, taken over the past 5 years to get an estimate of how much the European migration crisis is responsible, showed that 58% of men convicted in Sweden for rape and attempted rape were born abroad.

The program, called ‘Mission Investigation’ said the total number of convicted rape offenders over five years was 843 with close to 500 being foreign-born perpetrators.

Out of those, some 197 were from the Middle East and North Africa (45 coming from Afghanistan).

Knowing that Sweden has an immigrant population of some 5-10%, your chances of getting raped by an immigrant are thus far higher.

<blockquote class="twitter-tweet" data-lang="en"><p lang="en" dir="ltr">Sweden&#39;s national public service broadcaster, SVT, just ran a 1-hour program on the over-representation of foreign-born men in Swedish rape convictions. Extremely emotive topic that will be discussed here for many days leading up to the election in two weeks.</p>&mdash; Christian Christensen (@ChrChristensen) <a href="https://twitter.com/ChrChristensen/status/1032342188653518849?ref_src=twsrc%5Etfw">August 22, 2018</a></blockquote>

The Sweden Democrats waggled an I-told-you-so finger after the program was shown whilst Editor-in-Chief of the SVT program Mr Ulf Johansson was asked why he had decided to produce a potentially inflammatory newscast just ahead of the election. Mr Johansson claimed that every political party was tackling issues around immigration and it was important to give Swedes a better insight into their society.

Mr Ulf Johansson: "I don't think this will have an effect on the election. There has been a lot of debate already about this and it’s just more facts in an existing debate."

The programme furthermore revealed that in rape cases victim and attacker did not know each other, the proportion of foreign-born offenders rose to 80%.

In order to shed some light on these figures, the programme had brought in a former police officer born in Afghanistan. He admitted that some young Afghans who had come to Sweden in recent years had views that ‘differed quite significantly from Sweden's idea of sexual equality.’

Note that this is "foreign born", second or third generation immigrants likely make up a huge chunk of the remaining percents.