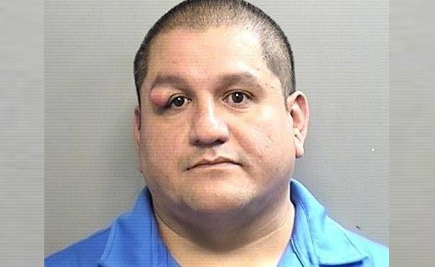 There's another disturbing case of pedophilia being embraced by a perverse now-former Coach and Optimist Club of Arlington Football Project Committee Chairman. in Texas, where authorities say that 40-year-old Carlos Alberto Guzman repeatedly sexually assaulted a young child under the age of 14 and was caught with child pornography in his possession.

The best part of this story is the mugshot, where it appears the pedophile was hit with an object of some sort, possibly by an angry parent or another person who found out what Carlos Alberto Guzman may have done. Either way, it's shame that they didn't make him suffer for his atrocious crimes against children.

The Hispanic male was one the community's bright hopes, having been what was perceived as an inspirational coach to the parents and fans of the on-field and throughout the <a href="https://oca.siplay.com/site/"> Optimist Club of Arlington Football Project Committee </a>, whereas their former Chairman, Carlos Alberto Guzman was living a dark dual life inside a dangerous and deranged mind of a pedophile.

Authorities wouldn't state-specific details as per the crimes of which were committed by Guzman, and the Arlington Police Department is keeping the case under tight weapons outside of naming the charges against the former Administrator.

With the pedophilia plague infecting communities across America, it's important to psychoanalyze these creeps and understand what traits, behaviors, or indulgences they may have embraced or shown to others including their families prior to becoming someone who would intentionally prey on God's children, with the intent to sexually assault that child. These people are sick.

We know that Guzman was found to be in the possession of graphic and disturbing child pornographic materials, some of which could have caused the National Center for Missing and Exploited Children to tip off police as to Guzman potentially downloading or distributing the child pornography based upon a trace of his IP address, which is common in these cases.

According to local news affiliate<a href="https://arlingtonvoice.com/arlington/crime-emergency/2018/08/31/long-time-optimist-football-coach-admin-arrested-possessing"> The Arlington Voice</a>, Guzman was still coaching several young children per their football teams, in some form, of which the local media outlet says included the Pope Panthers, Optimist Vikings, and the Lamar Vikings 7-on-7 football teams; adding that the victims, in this case, were possibly the young players on those teams.

The Pope Panthers are from Pope Elementary School in Arlington, as part of the Arlington Independent School District (ISD), in which would make the children anywhere between 4 and 12-years-old.

The Optimist Vikings are from all apparently from a variety of schools, not school-based, in Arlington, and are not part of the Arlington Independent School District (ISD), but <a href="https://www.sportsengine.com/org/arlington-community-athletics-optimist-club-aca/program/2018-aca-optimist-club-football"> does appear to be a team in the youth league</a>, and as a result, it would make the children anywhere between 4 and 12-years-old.

The Lamar Vikings are<a href="https://www.lamarvikings.com"> Lamar High School</a>, which would make the youth team anywhere from 13 to 18-years-old.

We know that Guzman was arrested on two charges of lewd sexual behavior involving children, and we know to an extent of the possession of child pornography charges, but we will update this story with any additional information uncovered in the coming weeks as per victims or an indictment.

The Tarrant County Grand Jury has until towards the end of October to return an indictment max, so we'll keep our eyes out for this and all forthcoming information.

Despite this, she did suggest that the Tarrant County Grand Jury has 90 days from the date of Guzman’s arrest to issue an indictment on the felony counts, or kick the case back to the lower courts in Arlington, in compliance with state law.

In Arlington the community is seeking answers as to how this could have happened with someone so close to their children have slipped through the cracks with these disgusting and demonic issues the would suggest it's ever okay to lay a finger on a child, let alone to rape, molest, or engage in any type of sexual assault on one of Arlington’s children, knowing that today's children are tomorrow's leaders.

The Optimist Club has also issued their own official statement, in which the club said, “Guzman left on his own accord in 2016, and no allegation of misconduct was presented to any Optimist Club member in a supervisory position while or after Guzman was affiliated with the football program or club.”

<blockquote>Mr. Guzman left the club after the 2016 football season of his own accord to pursue interests outside of the club. At no time was any allegation of misconduct brought to any Optimist member in a supervisory position or the Board of Directors while or after Mr. Guzman was affiliated with the football program or club.</blockquote>

<blockquote>The Optimist Club of Arlington has and will continue to perform criminal background checks and registered sex offender checks on each and every member in our programs since the late 1980s. This included Mr. Guzman. There was nothing in his background check that would have precluded him from being involved with the youth programs. Mr. Guzman was coaching in Lamar’s 7 on 7 programs and to our knowledge, there have been no accusations presented to Lamar HS or Arlington ISD.

<blockquote>This is a sad and unfortunate event and the Optimist Club of Arlington does not condone or tolerate any actions that would put children at any risk. We do certainly empathize with the families of any child who has ever endured abuse at the hands of a trusted adult. We would encourage any parent or guardian that is aware of or suspects any misconduct in this matter to please contact the detective in charge at the Arlington Police Department.</blockquote>

<blockquote>The Arlington Voice contacted the Optimist Club of Arlington on Friday afternoon inquiring about Mr. Guzman’s arrest. Considering the police department and the district attorney did not contact us about their case, the club did not have an official statement prepared for the article posted on Facebook only a few hours after the initial phone call.</blockquote>

<blockquote>The Optimist Club of Arlington has been sponsoring youth sports programs for the last 70 years and have been diligent for the safety and protection of everyone participating.</blockquote>

<blockquote>While no amount of checks can ever know what someone’s true intent is, we believe we take what precautions we can take to protect the youth in our programs.</blockquote>

Social media users in Arlington via Facebook, don't seem to be happy with the statement from The Optimist Club of Arlington, especially since their Football Project Committee Chairman and coach was arrested for sexually assaulting a child, and from what seems to be the case, <i>Guzman was first reported to have been subject to an investigation back in 2017, according to another article from the <a href="https://arlingtonvoice.com/arlington/crime-emergency/2018/08/31/long-time-optimist-football-coach-admin-arrested-possessing"> Arlington Voice</a>.

Circumstances such as these in schools stew hatred and anger towards these monsters, and rightfully so, <i>anyone who hurts a child deserves to be removed from the face of the earth.</i>

According to official court records, Carlos Alberto Guzman was arrested and charged with numerous counts of crimes against children, including that of the <i>Possession of Child Pornography, Felonious Continuous Sexual Assault of a Child Under 14, as well as that of Felony Sexual Abuse of a Child,</i> which would likely result in an indictment; albeit, it now appears the Arlington Police Department will be awaiting a verdict from the Stage Attorney

Carlos Guzman is currently in jail and will remain incarcerated in the<a href="https://ijis.tarrantcounty.com/inmatesearch/InmateData.aspx"> Tarrant County Jail </a>via their Greenbay Unit on 5136 Northeast Parkway in Fort Worth, in lieu of $22,500 cash only bond.

The former Chairman of the Optimist Club was around children day in and day out, both on the field and off; say authorities, which is one of the reasons they've asked for anyone with any additional information in this case or believes they may have been victim to tragedy to contact them immediately via Detective Trisha Walker at 817-795-9992 or by calling the Department directly at 817-274-4444.

If you prefer correspondence, you can do so by sending an email to [email protected] as well as<a href="http://www.arlington-tx.gov/police/contact-us/">clicking here to visit the Arlington Police Department Website</a>, where you can find additional resources.

<b>If you know of any child who may have been a victim of sexual exploitation, please call the National Center for Missing or Exploited Children (NCMEC) at 1-800-THE-LOST (1-800-843-5678) or visit the</b><a href="https://www.missingkids.com"> NCMEC’s website directly </a><b>to find assistance directly dependent upon the specific case you're interested in finding information for.</b>