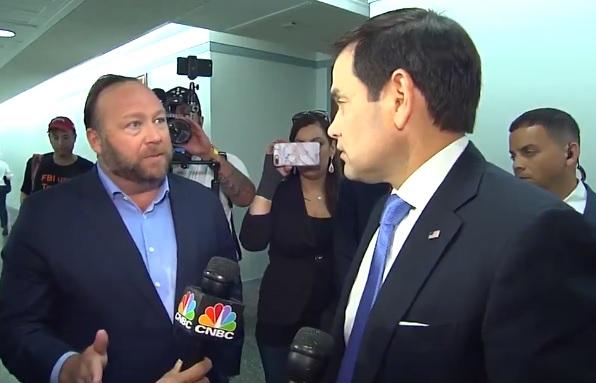 The recently deplatformed radio host Alex Jones of InfoWars ran into Republican Sen. Marco Rubio who was giving an interview and patted him on the back. Jones interrupted the interview prompting Rubio to warn him off saying "I'll Take Care Of You Myself" during the bizarre clash.

Here is an alternate angle of the encounter:

Related coverage: <a href="https://thegoldwater.com/news/33948-Alex-Jones-Twitter-Suspended-For-One-Week">Alex Jones' Twitter Suspended For One Week</a>

The clash occurred Wednesday ahead of a Capitol Hill hearing on social media. Jones has been quite vocal about his disdain towards these social media hearings where he claims his name is brought up yet he is not allowed to be there and defend himself. Rubio's interview was taking place in a hall and he was voicing his concerns that China and other governments could demand social media platforms like Facebook and Twitter crackdown on political opposition leading up to the Senate Intelligence Committee hearing.

Jones was banned from Facebook, Google, YouTube, MailChimp, and a host of other social media and tech companies over comments he made that were deemed "hate speech". Facebook defines hate speech as "a direct attack on people based on what we call protected characteristics — race, ethnicity, national origin, religious affiliation, sexual orientation, caste, sex, gender, gender identity, and serious disease or disability. We also provide some protections for immigration status. We define attack as violent or dehumanizing speech, statements of inferiority, or calls for exclusion or segregation."

Jones shouted down Rubio during the confrontation yelling, "The Democrats are doing what you say China does" referring to the shadow banning and targeting of conservatives on social media platforms. "Republicans are acting like it isn’t happening. Thank God President Trump is," Jones said.

Rubio tried to distance himself from Jones saying, "I just don’t know who you are, man." Jones wasn't pleased with Rubio's response and he accused him of playing dumb and called him a "snake" and a "little frat boy". As the spat continued, Rubio said, "Alright man, who are you? Who is this guy? I swear to God I don’t know who you are." When Jones patted Rubio on the back he became defensive and his security closed in.

"Hey don’t touch me again, man, I’m asking you not to touch me," Rubio said to which Jones said, "I just patted you nicely." Rubio shot back, "I know, but I don’t want to be touched by you, I don’t know who you are." What the Senator said next set off Jones even more. "You’re not going to get arrested man, you’re not going to get arrested, I’ll take care of you myself," Rubio warned.

Jones has had some backing in recent weeks such as from Ted Cruz who tweeted that although Jones slandered his father by saying he was responsible for killing JFK he did not agree with Jones being silenced.

Fucking faggot, how many dicks has this guy sucked! Look up his family being drug runners, that is why he gets along so well with the Bush's more drug runners!