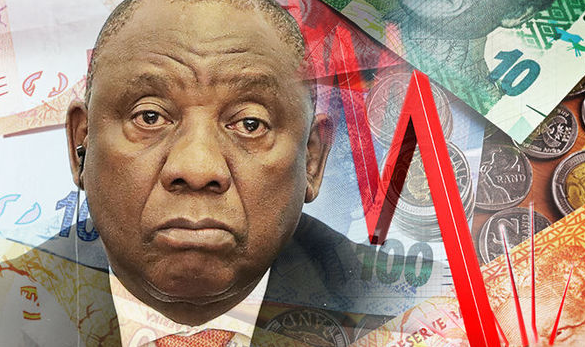 Although the mainstream media claimed that the pending expropriation legislation and the killing of white farmers was nothing but a white supremacist conspiracy theory, international investors decided to take no such risks.

Combining less foreign investment with a surprise drop in agriculture in the second quarter (72% of the land is owned by white farmers who decided to take fewer risks planting crops unknowing whether they will still own their farm in a few months) means South Africa enters a recession.

Related coverage: <a href="https://thegoldwater.com/news/35856-Nedbank-South-Africa-Mortgage-On-Farm-Also-Due-In-Case-Of-Expropriation"> Nedbank South Africa: ‘Mortgage On Farm Also Due In Case Of Expropriation’</a>.

President Ramaphosa (pictured), who recently took over from former President Zuma who is under corruption charges investigation, will only see the EFF (Economic Freedom Fighters, the extreme leftwing party that wants to drive out white farmers and take back the land) from Julius Malema scream ever harder for a participation in government with his ANC (Africa national congress).

Mr. Malema commented on the recent visit of the UK Prime Minister, by stating: “We have nothing to say about that colonizer May. Actually, the policy of the EFF is for South Africa to pull out of the commonwealth. The commonwealth is presided over by the colonizer and we reject that. That type of respect that we give to the colonizer is the one that perpetuates white supremacy.”

The South African rand, just like other emerging economies Turkey and Argentina, has seen its currency drop on the uncertain political situation. So far the rand has fallen by 19 percent versus the dollar, with the last 18 days (since US President Donald Trump’s infamous tweet) contributing to more than half of the decline following the international debate over South Africa's land expropriation laws.

Bank of America Merrill Lynch explained it the easiest when they said to the Financial Times: “We do not think explicit land grab or damage to property rights is likely but ongoing uncertainty will continue to deter business confidence and investment.”

All investors must pull their money from this sewer,believe me the riots are on the cards ,when their ignorant black bellies are empty ,due to killing and removing the whites who kept the ignorant fuckers alive,let the starvation begin only things that will be eating will be the vultures dining on blacks

Exactly. So not a conspiracy theory I live here! They hate us! They want us dispossessed and are killing us all the time.

Imagine that! The same thing happened under Stalin when he did what this moron is doing in the last century. How many millions have to die before socialists wake up? Ramaphosa has got to be dumber than a pile of rocks!

Europe should get Boer back. I wouldn’t mind giving them my spare bedroom.

There are plenty of african americans who could repatriate to SA and help bring it back to world status!