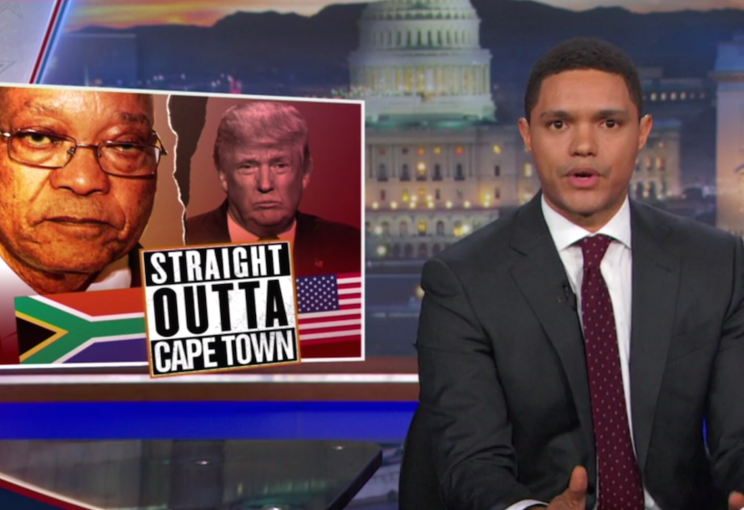 Dear Trevor Noah, No More Jokes On South Africa Then?

Though I tend to agree with Mr Piers Morgan that Jon Stewart was far funnier than Trevor Noah is, I must admit to having been a fan of The Daily Show for years now.

Especially so since I’ve discovered that you can select which segments to see and which not on Youtube. In this manner, I can skip the daily Trump bashing altogether and as I’m readying for bed and put my most current reading material aside, one of the last things I tend to do from time to time is to have a laugh at ‘current events’.

Unlike Mr Seth Meyer’s, whose ‘Closer Look’ segment mostly goes on for 50% of the time bashing the current US president no matter what the subject title is, or Mr Jim Jefferies who swears a tad too much for my generation, the 27 or so writers that provide Mr Noah with his material tend to be more international in their pickings and offer a lighter look on the issues I write about.

However, in the past three weeks or so, it has sprung to my mind that Mr Noah, who is of South African origin, has seemed to omit any reporting on the issues going on in his home nation altogether.

This seems amiss as the country once billed as the fastest growing economy of Africa has slipped into recession for the first time in a decade this week, mostly due to a surprise fall in agricultural output from the white farmers who own 72 of the land and seem to find it risky to plant new crops as they are unsure about their farm being expropriated or not.

It also comes at the time that US President Donald Trump sent a Tweet about South Africa after having seen a segment about the alleged expropriation of farmers on Fox and the killing of white farmers, a supposed white supremacist conspiracy theory.

And, lastly, also lending itself to humor and joking, the far-left party of Mr Julius Malema has gone on to call Ms Theresa May, the UK Prime Minister a ‘coloniser’ and claimed that there are ‘groups of white right-wingers trained by Jews to be snipers’.

All these topics should easily lend themselves to funny segments in my humble opinion, but apparently, the Daily Show writers fail to see the humor.

This week they were focused on the congressional hearings of President Trump’s pick for the Supreme Court Mr Kavanaugh but omitted the hearings of Twitter and Facebook CEO’s going on at the same moment.

Perhaps Mr Noah will surprise me in the coming days, weeks. I doubt it though.

I don’t understand why we should expect the liberal morons to change. Wouldn’t that be like seeing someone do the same thing over and over and expect a different result……insanity? They’re cracked in the head and expect them to act accordingly.

You have to be an exceptional writer to find something funny in a country where the government wish to legalize theft?

"The duties of Social-Democrat media puppets consists of editing, rewriting and representing historical or political events in various forms of media in order to conform and reinforce the Social-Democrat Party’s version of the past and present.

The Social-Democrat Party refers to these tasks as the PC Speak, Future Speak or Rectification of records.

Put him on the spot. Make him talk about it. Like the guys who used to yell cnn is fake news, Noah needs heckled about this.