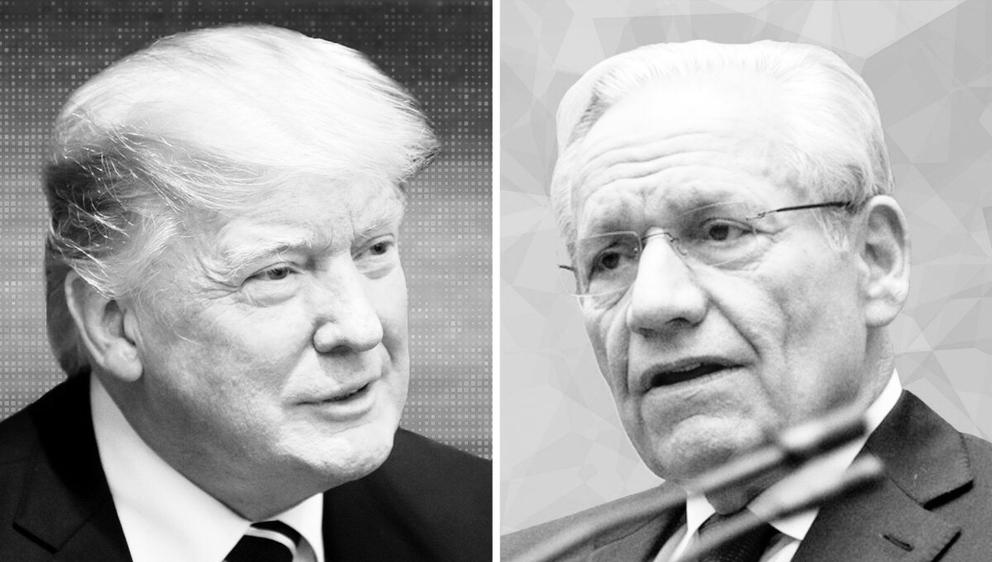 Bob Woodward has been lying for decades. His latest book is merely an op-ed meant to drive more bifurcation of America.

Shipp was one of the CIA officers protecting Casey and stopped Woodward from entering. Amazingly Woodward produced Casey’s “deathbed confession” in his book ‘Veil.’

Perhaps he read Casey’s mind because Woodward never got close to Casey during his final days in 1987. How could he obtain a confession from Casey’s bedside when he wasn’t allowed in the hospital room?

“Woodward needs to be exposed,” Shipp told True Pundit. “I was there when Woodward lied about his discussion with Casey on his deathbed.”

True Pundit’s Thomas Paine said, “Woodward has made a career out of such misrepresentations”.

On Monday, Trump said he was going to write a real book about D.C., exposing the widespread corruption.

Shipp alleges Woodward had top secret clearance during Watergate. Woodward was the CIA’s mouthpiece who made sure Richard Nixon was removed from the White House.

<blockquote class="twitter-tweet" data-lang="en"><p lang="en" dir="ltr">Bob Woodward was also the senior editor of the Washington Post when I came out to blow the whistle on the CIA and called the Post. The Post went straight to the CIA and reported my contact. The Post is now owned by Amazon, which has a $600M CIA contract. <a href="https://t.co/qFxSYGBocZ">pic.twitter.com/qFxSYGBocZ</a></p>&mdash; Kevin Shipp (@Kevin_Shipp) <a href="https://twitter.com/Kevin_Shipp/status/1037119679565836290?ref_src=twsrc%5Etfw">September 4, 2018</a></blockquote> <script async src="https://platform.twitter.com/widgets.js" charset="utf-8"></script>

“The Woodward book is a Joke – just another assault against me, in a barrage of assaults, using now disproven unnamed and anonymous sources. Many have already come forward to say the quotes by them, like the book, are fiction. Dems can’t stand losing. I’ll write the real book!”

In 2012 POLITICO put together a list of six occasions where critics questioned Woodward’s reporting:

Adrian Havill, author of “Deep Truth: The Lives of Bob Woodward and Carl Bernstein,” wrote in the book that Woodward’s claim of signaling his “Deep Throat” source for meetings using a flowerpot on his balcony “does strain credulity,” since Woodward’s balcony faced an inner courtyard and isn’t visible from a nearby alleyway.

Woodward claimed in his book “Veil: The Secret Wars of the CIA 1981-1987” that Casey admitted on his deathbed that he had known about the diversion of Iran arms sale money to the Contras.

But Casey’s daughter, Bernadette Casey Smith, claimed that Woodward “never got the deathbed confession,” according to the Houston Chronicle. In addition, Kevin Shipp, a member of Casey’s security detail, asserted in a self-published memoir that none of the agents standing guard over Casey allowed Woodward into his hospital room at Georgetown University Hospital, and that in any case, the former CIA director was not able to talk at the time Woodward cited.

In his 2004 book “Plan of Attack,” Woodward claims that CIA Director George Tenet said that it was a “slam dunk case” that Saddam Hussein had weapons of mass destruction.

However, Tenet claimed that his words were taken out of context and that he was being set up as a scapegoat for the failures of the Iraq War. In a “60 Minutes” interview, Tenet said that he had said “slam dunk” to suggest it would be easy to build a public case for the war.

4. Did Justice William J. Brennan Jr. vote against his judgment to win favor?

In Woodward’s 1979 book “The Brethren: Inside the Supreme Court,” Justice William J. Brennan Jr. is alleged to have voted against his own personal judgment in the case Moore v. Illinois in order to avoid offending Justice, Harry A. Blackmun. According to Woodward and co-author Scott Armstrong, Brennan had realized his initial vote was incorrect but declined to change it in order to avoid pushing Blackmun’s vote away on abortion and obscenity cases.

Anthony Lewis challenged this account in the New York Review of Books, saying that the charge was leveled “without serious evidence” and that the story “leaves doubts not only about the author's’ understanding but about their scrupulousness.”

Lewis said in a follow-up that he had reached all 30 law clerks that were at the Supreme Court in the 1971 term.

“Their verdict on the story told by Woodward and Armstrong was overwhelmingly negative. The prevailing tone of their comments was disbelief, verging on contempt. The clerks who had personally worked on the case or had any direct knowledge of it all flatly rejected the story,” Lewis claimed.

In “Veil,” Woodward also describes Ronald Reagan’s recovery from the 1981 attempt on his life as quite poor. He reports on a scene in which Reagan collapses into a chair. Woodward further writes that in the days after his release from the hospital, Reagan could “concentrate for only a few minutes at a time” and in the following days would only be able to “remain attentive only an hour or so a day.”

Reagan’s physician, Dr. Daniel Ruge, disputed this portrayal, telling the AP that “his recovery was superb … I never saw anything like that [description in the book] … it’s certainly news to me and I was there all the time.”

Close confidants of Belushi expressed outrage at the way the comedian was portrayed in Woodward’s biography “Wired,” alleging that some of the scenes were fabricated.

“There were certainly things that he just got patently wrong. He painted a portrait of John that was really inaccurate — certain stories in there that just weren’t true and never happened,” said Dan Akroyd, a fellow Blues Brother, and close friend, in the book “Live from New York: An Uncensored History of Saturday Night Live.”

It is clear Woodward is trying to keep his name in the public and could not do that without making up something implausible for the left to salivate over.