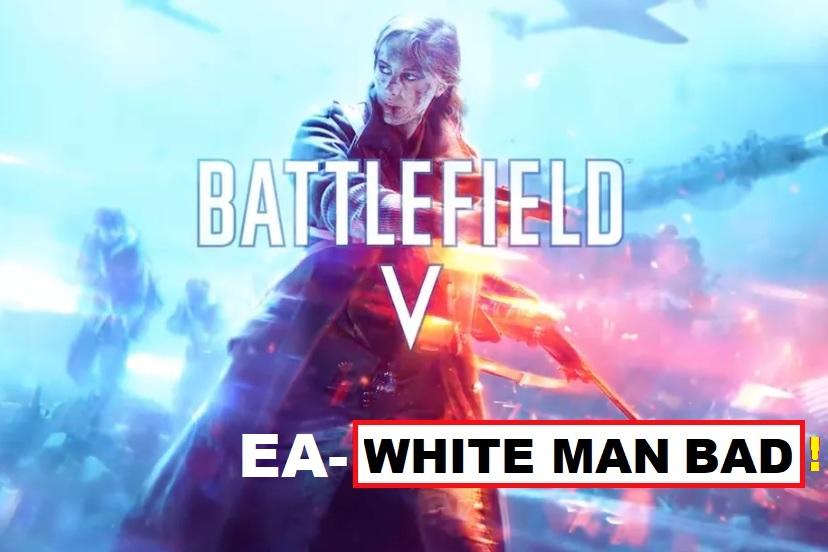 Whether it's the disabled females on the front lines of their latest World War II game, or the company's chief creative officer Patrick Soderlund attacking fans for their reaction to the trailer, EA wants you to know they are politically correct. "If you don't like it, don't buy it," was his final response to recent criticism. Soderlund has since left the company, most likely for his derisive comments toward fans, players participating in the open have found even more SJW propaganda embedded in the game.

Players posted screenshots on Reddit from Battlefield 5's open beta showing that certain words like "white man" and "Nazi" are censored in the game's chat while words like "black man" or "Asian man" are not. The censorship is so outrageous that fans have begun referring to the game as "genderfield" and "censorfield." Curious these decisions are being approved by higher-ups at the company while pre-orders for the game are down 85%.

More of the ridiculous words banned in the game include all forms of "DLC," (downloadable game content) except for "free DLC." This type of controlling the narrative from EA DICE who already shows they care more about being "woke" than honoring World World II veterans and fans after making a name in the industry for creating one of the more historically accurate war experiences. A social media user tweeted at the game's multiplayer producer, "It's a game series for adults, full of swearing in vo and you can't even write "crap, they are attacking B." It's silly, the entire filter, especially if you can't turn it off".

Other words banned include "jew," "Jewish", "doofus", "huge bowl," and "he is hit." You also can't type "so does" or "pleb" yet you can type "Muslim" and "vagina." This is not an algorithm; these are conscious decisions at EA to manipulate the narrative, our speech, and people's ability to think for themselves. If you are playing a game where you can blow someone sky high with a tank or take a girl's head off with a sniper rifle, who cares about what you are and aren't allowed to discuss? The game is marketed to adults and has an "M" for mature rating.

Another social media user said, "You also can't tell someone to eat spaghetti." Another user named "LochnessDigital" said, "For me, it censored "as spawn" because the letters a-s-s happen sequentially. It's so dumb." Reddit users compiled an extensive list of ludicrous words that were censored including "lag", "hitreg", "huge bowl", "wish", "suck", "he is hit", "a no or a_no", "poo", "penis", and "pleb". By the way, what the heck is up with being able to say vagina but not penis EA DICE?

EA DICE responded to the criticism saying, "One of the new features we’re working on is a profanity filter in-game to reduce toxicity. That being said, we have heard some complaints that the filter is blocking words that aren’t profanity or shouldn’t be blocked, like "DLC," etc. and isn't blocking some words that should be (obviously, I will not be providing examples of these.)"

"Please note: This is a work-in-progress and we will be taking this feedback to tweak the sensitivity of the filter and improve its usage without censoring relevant conversation. Healthy discussion is what drives improvement in our games, and we’d never want to impede that. Thanks for bringing your concerns to us regarding the current iteration of the profanity filter and we’ll keep working on it."

It's one thing to ban profanity and racial slurs, sure. No one has a problem with that, and I'm sure most people are happy to be able to censor those obscene and derogatory terms. But when it comes to trying to push a political agenda filled with identity politics fans of war games aren't looking to be inundated and told how to think when they get a chance to escape from their day to day lives for an hour or two in a video game on the weekends. If EA DICE doesn't start to get their act together soon, the 85% drop in preorders will soon be an 84% drop in sales.

Cuck Fest V is an abomination. It will fail as it richly deserves...

EA is a filthy dirty corporation. They have been buying up innovative developers for years. And usually shutting those studios down.

fuck your cucklefucking PC mentality EA. your buttfuckers-5 is rated M, so I better god damn be free to talk as much wicked shit online, even in the chats. I honestly believe EA hired the fucking bully hunters after they flopped. to be short, if you have a problem with toxicity, get the fuck over it or get the fuck out. its your own damn fault for being so god damn fragile, TOUGHEN THE FUCK UP CUPCAKE, ITS A WAR SIMULATION NOT A SAFE BUBBLE FOR SJW'S.