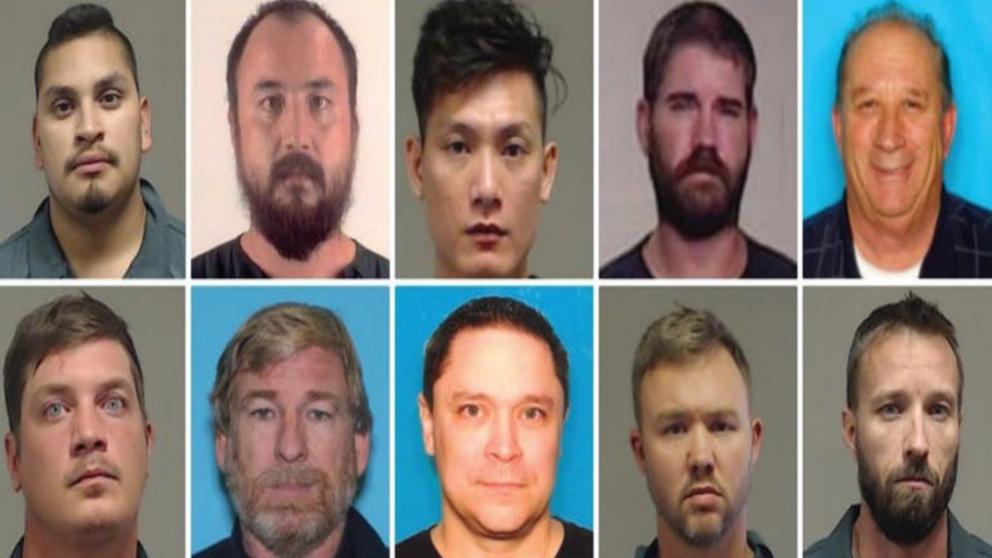 A joint coalition of law enforcement agencies across the great state of Texas have united with the Collin County Sheriff's Office, who announced 12 arrests in "Operation Zeus", which targeted online exploitation of children.

“Operation Zeus” is the brainchild of the Collin County Sheriff's Office, in cooperation with 20 federal, state, and local law enforcement agencies.

This was all done in cooperation with the National Center for Missing and Exploited Children, the Immigration and Customs Enforcement (ICE) agency, and Homeland Security Investigations (HSI) divisions.

The three-week-long sting operation called "Operation Zeus", combined over 100 investigators from the above local, state, and federal agencies; who together arrested 12 pedophiles from various parts of the state.

Collin County Sheriff Jim Skinner and the FBI Dallas Division announced the arrests, saying that 22 search warrants were executed across the Dallas Fort Worth area.

Numerous residences, businesses, and other places of interest were subject to surveillance and infiltration, which led to the detainment of multiple pedophiles involved in child pornographic distribution.

Two juveniles were arrested, but their identity must remain sealed in accordance with state law.

The Collin County Sheriff's Office has the highest value of arrested pedophiles of any law enforcement agency in the United States of America, with 109 total.

"We're gonna find you," said Collin County Sheriff's public information officer Nick Bristow. "If you're up here involved in this kind of activity, contacting minors online, juveniles online for the purpose of going and committing sexual acts with them, or sitting at your house looking at child pornography, we're gonna find you!"

"They were being used as a victim of child pornography," Bristow explained. "It's very unfortunate, extremely unfortunate, but we were lucky enough to get in there and save this person."

He added that 10 of the arrested pedophiles hail from North Texas, and shockingly, two juveniles were arrested for charges ranging from Promotion of Child Pornography to Online Solicitation of a Minor.

At least one missing child is now safe when the Collin County Sheriff's Office and the Federal Bureau of Investigation United to raid the child's kidnapper, holding the minor hostage to produce child pornography.

"They were being used as a victim of child pornography," Bristow explained. "It's very unfortunate, extremely unfortunate, but we were lucky enough to get in there and save this person."

"A lot of these kids get in chat rooms," Bristow said. "And they start talking to these adults that have nefarious motives in mind and one thing leads to another."

“We will remain relentless in our commitment to protect our innocent children from sexual predators. If you are transmitting or receiving child pornographic images or attempting to meet with a child for purposes of sex, be confident in the knowledge that we will soon enough show you the inside of the Collin County Jail,” Sheriff Skinner said.

In addition to the arrests and home raids, investigators seized countless stockpiles of evidence which will most likely lead to further warrant executions.

What evidence is found on hard drives, computers, and other electronic devices that are able to provide any other connection to pedophiles will become probable cause for those warrants.

All of the evidence has been sent to the state crime laboratory for forensic examination, and once those have been analyzed, investigators may identify other offenders, which could lead to additional arrests.

The Collin County District Attorney’s Office was the first of organizing an operation “to identify and arrest child exploitation predators,” said Plano PD spokesman David Tilley, “so the Collin County DA’s office wanted to go to the best person available to make that happen.”

<b><i>Thank you to all of the hero law enforcement agencies involved in this operation!</i></b>

<i>The scourge of child pornographic distribution continues to be eliminated under the Trump Administration, which has result in over 11,000 arrests related to human and child-sex trafficking, child molestation, or child pornography since President Trump's inauguration in January of 2017, setting records in the widespread victories against the rampant pedophilia in America.</i>

"If you are transmitting or receiving child pornographic images, or attempting to meet with a child for purposes of sex, be confident in the knowledge that we will soon enough show you the inside of the Collin County jail," Collin County Sheriff Jim Skinner said in a statement.

Pigs…they should throw them in a deep, dark hole & deficate on them

Thank God for these who are working so hard to take these pedophiles down, it’s exhausting-I’m sure because it takes a long time and there are so many in society who just don’t seem to care-what kind of society is it that doesn’t want this behavior permanently gone?

God Bless each and everyone of the people who are so diligently fighting to protect our children. May they be protected in their minds hearts, and spirits against this evil. And may God Multiply their blessing 100 fold intheir lives. Thank you to all of you.

Someone should look at OnTarget Partners in Frisco, TX. The CEO, Ed Trachier is a pedophile sympathizer. He does business with a twice convicted pedophile named Kurt Kistler. This freak has been listed for life by the Texas Dept. of Public Safety's Texas Sex Offenders Registry. Ed Trachier has this monster in office several times a week around employee's children without the employees or his clients having a clue to what this guy has done. All I know is Ed Trachier doesn't seem to have a problem with it so it really make us wonder about him as well. They both came out of Subiaco Academy Class of 87' in Arkansas which is known for child molesting priests and Pedophile Deans of students. Someone should look into this.

Ed Trachier is a child molester. Associated with Kurt Kistler. On target Partners in Frisco TX. Someone please contact the police.