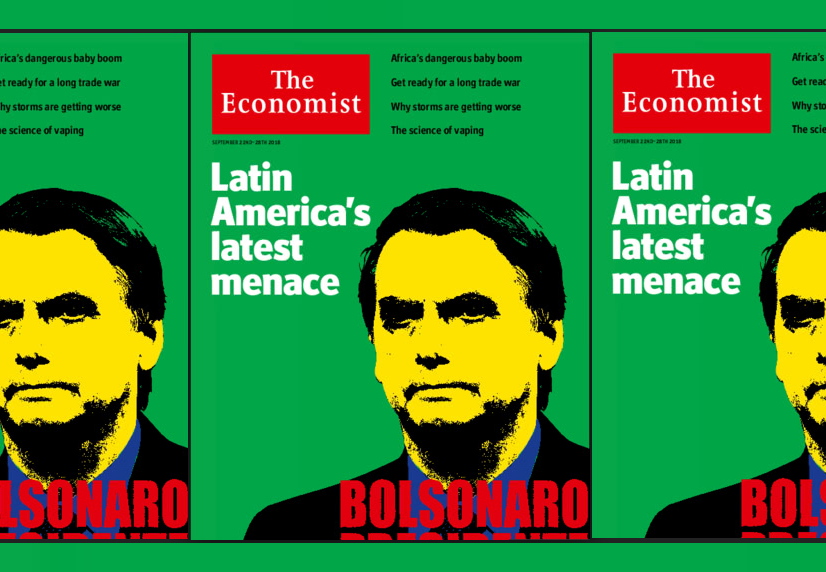 The grace period which is to be respected when a presidential candidate of a major nation survives an assassination attempt is officially over now that magazine The Economist and the leftwing British Broadcasting Corporation (BBC) both renewed their attacks on the leading candidate for the Brazilian presidential election, Mr. Jair Bolsonaro.

Whereas most of his counter-candidates respected the unwritten rule not to criticize a candidate in hospital, the media counted down to two weeks after the attack on Mr. Bolsonaro’s life to once again start criticizing and fearmongering.

The latest polls have Mr. Bolsonaro leading the pack with some 30%, more than double the nearest rival candidate and thus it is no wonder that the attacks against his personae had to restart at some point.

The Economist’s arguments for advising Brazilians not to choose for Mr. Bolsonaro is because of his comparable method of using authoritarianism in combination with the ‘Chicago’ school of economics, much like Pinochet did in Chile in between 1973 and 1990.

The magazine stated: “His main economic adviser is Paulo Guedes, who was educated at the University of Chicago, a bastion of free-market ideas. He favors the privatization of all Brazil’s state-owned companies and “brutal” simplification of taxes. Mr. Bolsonaro proposes to slash the number of ministries from 29 to 15, and to put generals in charge of some of them.”

The problem with their argument, of course, is that they do not explain who the public should vote for if not for Mr. Bolsonaro.

The BBC meanwhile today launches a renewed attack against Mr. Bolsonaro on the basis of the argument that women should not elect him because of past quotes.

They do however admit that the leading conservative rightwing candidate also has strong online support and whereas the fight against him was trending in the beginning of the week under the hashtag #EleNao (#NotHim), by the end of the week Mr. Bolsonaro's online supporters, known as "bolsominions," had taken over the argument and created a group of their own defending "mito" (the legend).

The many women who support him refer to themselves as "bolsomitas" and grouped themselves in a hashtag named #mulherescombolsonaro (#womenwithbolsonaro).

They stated "five reasons to vote for him” highlighting his image as a "clean politician", and one who is not associated with corruption.

Brazilians go to the polls on 7 and 28 October for a two-round presidential election.

How is your pedophillia sex ring by muslims migrants, increase of acid attacks, rape, sknife stabbing, theft and many other problems by muslims? How is it to be an alien inside your own country?

(((They))) once agaim show their lack of compassion for the goyim