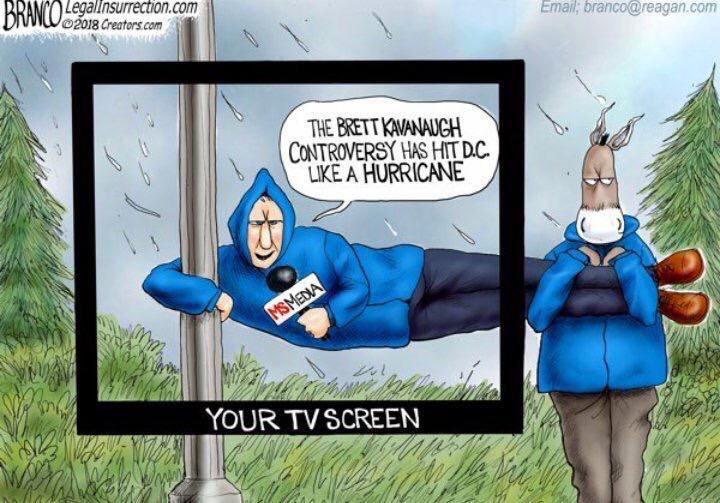 The fourth purported witness to Christine Blasey Ford’s claims that she was sexually assaulted by Supreme Court nominee Brett Kavanaugh has denied any recollection of having attended the party or even knowing Brett Kavanaugh.

The Senate Judiciary Committee was sent an email. Leland Ingham Keyser, a former classmate of Ford's at the Holton-Arms all-girls school in Maryland, said she doesn’t know Kavanaugh or remember being at the party with him.

“Simply put, Ms. Keyser does not know Mr. Kavanaugh and she has no recollection of ever being at a party or gathering where he was present, with, or without, Dr. Ford,” lawyer Howard J. Walsh III of Bethesda, Md.

The email was in response to a letter from a lawyer for the GOP majority staff, which said: "I understand that you have been identified as an individual who was in attendance at a party that occurred circa 1982 described in a recent Washington Post <a href="https://www.washingtonpost.com/investigations/california-professor-writer-of-confidential-brett-kavanaugh-letter-speaks-out-about-her-allegation-of-sexual-assault/2018/09/16/46982194-b846-11e8-94eb-3bd52dfe917b_story.html?utm_term=.c8b1b4a6f19f"> article </a>."

Debra Katz, Ford’s lawyer, said: “As Dr. Ford has said, she did not share her story publicly or with anyone for years following the incident with Judge Kavanaugh.

Keyser is the fourth witness who has said they have no memory of the party or the incident.

These include Mark Judge: "I have no memory of this alleged incident," Judge states in the letter sent by his lawyer, Barbara Van Gelder. Patrick “PJ” Smith, “I understand that I have been identified by Dr. Christine Blasey Ford as the person she remembers as ‘PJ’ who supposedly was present at the party she described in her statements to the Washington Post,” Smyth says in the statement. “I am issuing this statement today to make it clear to all involved that I have no knowledge of the party in question; nor do I have any knowledge of the allegations of improper conduct she has leveled against Brett Kavanaugh. “Personally speaking, I have known Brett Kavanaugh since high school and I know him to be a person of great integrity, a great friend, and I have never witnessed any improper conduct by Brett Kavanaugh towards women.” “To safeguard my own privacy and anonymity, I respectfully request that the Committee accept this statement in response to an inquiry the Committee may have.” And, of course, Judge Kavanaugh has categorically denied these claims.

Ford’s story has many holes in it. She can’t give any details regarding dates and times.

Let’s take a look at The Washington Post’s <a href="https://www.washingtonpost.com/investigations/california-professor-writer-of-confidential-brett-kavanaugh-letter-speaks-out-about-her-allegation-of-sexual-assault/2018/09/16/46982194-b846-11e8-94eb-3bd52dfe917b_story.html?utm_term=.8f656c986f18"> story </a> in which the details of the account are explained in detail:

Speaking publicly for the first time, Ford said that one summer in the early 1980s, Kavanaugh and a friend — both “stumbling drunk,” Ford alleges — corralled her into a bedroom during a gathering of teenagers at a house in Montgomery County.

While his friend watched, she said, Kavanaugh pinned her to a bed on her back and groped her over her clothes, grinding his body against hers and clumsily attempting to pull off her one-piece bathing suit and the clothing she wore over it. When she tried to scream, she said, he put his hand over her mouth.

“I thought he might inadvertently kill me,” said Ford, now a 51-year-old research psychologist in northern California. “He was trying to attack me and remove my clothing.”

Ford said she was able to escape when Kavanaugh’s friend and classmate at Georgetown Preparatory School, Mark Judge, jumped on top of them, sending all three tumbling. She said she ran from the room, briefly locked herself in a bathroom and then fled the house.

Ford said she told no one of the incident in any detail until 2012 when she was in couples therapy with her husband. The therapist’s notes, portions of which were provided by Ford and reviewed by The Washington Post, do not mention Kavanaugh’s name but say she reported that she was attacked by students “from an elitist boys’ school” who went on to become “highly respected and high-ranking members of society in Washington.” The notes say four boys were involved, a discrepancy Ford says was an error on the therapist’s part. Ford said there were four boys at the party but only two in the room.

Now let’s take a look at the inconsistencies. Christina King Miranda, who doesn’t even know Ford, said she remembered it being the talk of the school.

Miranda discussed her knowledge of the incident on Facebook:

When questioned about the inconsistency between her statements and Ford’s, her tune changed:

Kimberley Strassel wrote an interesting thread on Twitter last night. She obtained an email through a source from reporter Emma Brown to Mark Judge. Strassel’s thread written out below:

More big breaking news, which further undercuts the Ford accusation, as well as media handling of it. A source has given me the email that WaPo reporter Emma Brown sent to Mark Judge, one person Ford claims was at the party. This email is dated Sunday, Sept. 16, 2018.

The email wants a comment from him. The subsequent story would reveal Christine Ford's name, and give details of the supposed "assault."

One part of the email to Judge reads: "In addition to Brett Kavanaugh and Mark Judge, whom she called acquaintances she knew from past socializing, she recalls that her friend Leland (last name then was Ingham, now Keyser) was at the house and a friend of the boys named PJ."

This matters for two big reasons–Ford's credibility and WaPo's. The subsequent WaPo story would go on to cite Ford's name and details, and also list notes from a therapist that Ford told this to in 2012. Read carefully what WaPo reports, the same day it emails Judge:

"The notes say four boys were involved, a discrepancy Ford says was an error on the therapist’s part. Ford said there were four boys at the party but only two in the room.”

Wait, say what? WaPo reports publicly that Ford says it was "four boys,"even after WaPo reporter tells Judge that Ford had told her it was three boys and a girl.

So first, huge problem: This was just a week ago, and we have Ford giving two different accounts of who was present. Four boys. No, three boys, one girl. Either way, therapist notes from 2012 definitively say four boys, which Ford didn't dispute. But now… a girl!

Other problem: WaPo's reporting. Reporter has for a week had the names of those Ford listed as present. One is a woman. Yet it writes a story saying FOUR BOYS. Why? Maybe a mistake. But if so, why did WaPo never correct that narrative?

What, you can't find Keyser? She has lived in the DC area a long time. The paper had no trouble tracking down the other two men (btw, who also denied such party). And why not publish Keyser's name? It published the other men's names.

In its most recent update tonight, WaPo writes: "Before her name became public, Ford told The Post she did not think Keyser would remember the party because nothing remarkable had happened there, as far as Keyser was aware."

Wow. "Before her name became public, Ford told…" That is WaPo admitting that it had the name, and had Ford's response to what would clearly be a Keyser denial, but NEVER PUT IT OUT THERE. Again, why? A lot of people have a lot questions to answer.

Wait a minute, didn’t Ford write that the therapist’s notes say it was four boys and that the discrepancy was an error on the counselor’s part?

Let’s put this in perspective. Ford can't remember the location, how she got there, who she went there with or how she got home. She was drunk. She told her therapist there were four boys at the house but now there were three boys and one girl. All four people deny being there.

The Democrats are telling us we have to believe her no matter what the truth is:

<blockquote class="twitter-tweet" data-lang="en"><p lang="en" dir="ltr">After SCOTUS nominee Brett Kavanaugh was accused of a decades-old sexual assault, Sen. <a href="https://twitter.com/maziehirono?ref_src=twsrc%5Etfw">@MazieHirono</a> heard from women with similar personal stories: &quot;The trauma continues and they&#39;ve never talked about it … Not only do these women need to be heard, they need to be believed&quot; <a href="https://t.co/yJPiy8bnyW">pic.twitter.com/yJPiy8bnyW</a></p>&mdash; New Day (@NewDay) <a href="https://twitter.com/NewDay/status/1042384566575484929?ref_src=twsrc%5Etfw">September 19, 2018</a></blockquote> <script async src="https://platform.twitter.com/widgets.js" charset="utf-8"></script>

The left has really become unhinged. How long do we have to put up with this ridiculous lie in an attempt to derail Kavanaugh’s nomination?

I don’t believe a word out of that lying liberals mouth. Thank you for this article, the people need to know what we already know. The Democrats pay people to make false claims. So tired of this.

Debra Katz is a low life anti-Trump POS. This is a set up by DNC and Senate Dems to stop this appointment. And the ignorant left believe the lies of the thug Democrats

—“He was trying to attack me and remove my clothing.”—

proof that Brett was a normal teenage boy…..

When did she file the police report?

This is what happens when anarchists weaponize our sacred Fist Amendment.

She claims she tried to scream but he put his hand over her mouth. Why didn't she scream as she ran to the bathroom?

this is a lie. nothing happened. there was no party. these people are sick!

How come she is able to get a good job and live in a expensive area when she didn't even know where she was, cant remember the year, and was half conscious? Isn't that just as bad as the accusations shes throwing at a 17 who half came on to her then backed off? Its even worse. How about judge herself instead? I just hate the hypocrisy. Come on woman do the right thing and stand up.