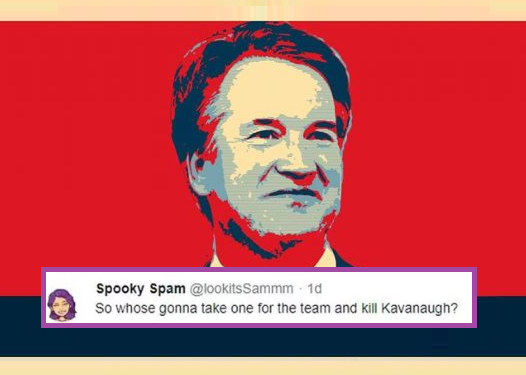 MN – Teacher Asks: “Whose Gonna Take One For The Team And Kill Kavanaugh?”

The anger on the progressive left side of American politics over the appointment of Judge Brett Kavanaugh to the Supreme Court has clearly not yet subsided.

A Minnesota teacher’s assistant was put on administrative leave today after she had posted a death threat to the judge on social media over the weekend.

The woman, identified by local media as Miss Samantha Ness, went by the social media alias ‘Spooky Spam’ and stated at first: “So whose gonna take one for the team and kill Kavanaugh.”

When someone pointed out to her that calling for someone to kill Justice Kavanaugh is a federal offense, she replied “Brett Kavanaugh will be dealing with death threats for the rest of his life being on the Supreme Court. I doubt my mid-west ass is a real threat.”

However, Superintendent Mr Mark Zuzek of Intermediate School District 917 in Rosemount confirmed in a statement that the district received a complaint regarding the employee who had posted the tweet and that the young female had been put on leave. Mr Zuzek said: “The employee has been placed on paid administrative leave pending the outcome of the investigation. Pursuant with the data practices act, we are limited to providing additional information regarding this matter.”

He confirmed that the district received “a substantial number of calls as parents and community members learned of the post and the message it forwards.”

Calls to a phone number listed for Miss Ness were not immediately returned. The tweet was published just hours after the White House nominee, Judge Brett Kavanaugh was sworn in after a bitter weekslong fight between Democrats and Republicans over his nomination. The hearings were mired by allegations of sexual harassment by Dr Ford and made for a serious political debate on all sides of US media.