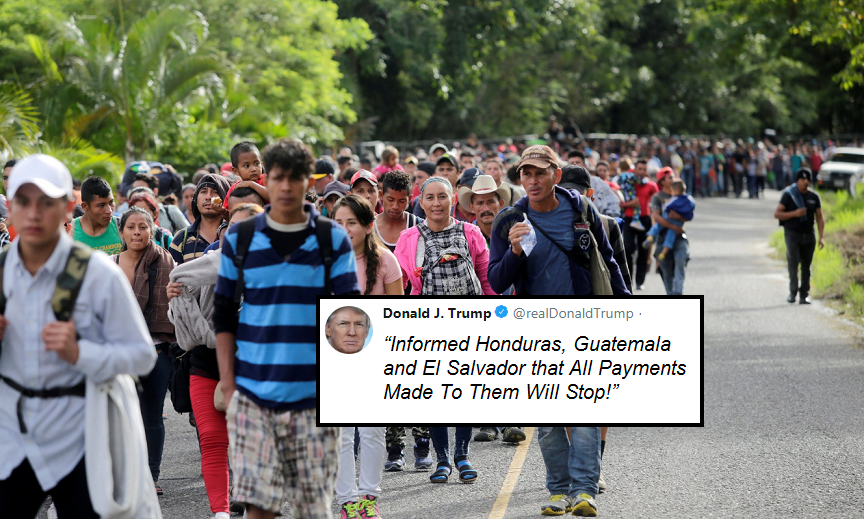 US President Donald Trump referred to the now already 3,000 strong ‘caravan’ of Hondurans headed for the US border repeatedly on social media yesterday, vowing to cut financial aid to several middle American countries if it was not stopped.

The group of people mostly from Honduras which includes scores of infants and children has by now entered Guatemala and is heading north towards the border with Mexico.

Knowing that this risks putting immigration square and center during the Midterm elections again (whereas Republicans would prefer the topics to be the economy and the Supreme Court) POTUS stated threatened a few hours ago: “We have today informed the countries of Honduras, Guatemala and El Salvador that if they allow their citizens, or others, to journey through their borders and up to the United States, with the intention of entering our country illegally, all payments made to them will STOP (END)!”

<blockquote class="twitter-tweet" data-lang="en"><p lang="en" dir="ltr">Caravan organizers tell me about 4,000 migrants, which started in Honduras, are now in Guatemala heading to the U.S. President Trump is threatening to cut aid to Honduras if the caravan is not stopped. <a href="https://t.co/wn8G8BlFUq">pic.twitter.com/wn8G8BlFUq</a></p>&mdash; Leyla Santiago (@leylasantiago) <a href="https://twitter.com/leylasantiago/status/1052288560391311360?ref_src=twsrc%5Etfw">October 16, 2018</a></blockquote>

As a result of those words, the Honduran security ministry said that an organizer of the migrant caravan, Mr. Baroloa Fuentes, was detained in neighboring Guatemala and would be deported back home in the coming hours. Their statement read: "The problem is that he (Bartolo Fuentes) did not comply with Guatemalan immigration rules and will have to be returned to Honduras in the coming hours," according to ministry spokesman Jair Meza.

Related coverage: <a href="https://thegoldwater.com/news/39507-StopTheCaravan-Guatemala-Backs-Down-And-Lets-3-000-Heading-For-US-Pass-Video">#StopTheCaravan - Guatemala Backs Down And Lets 3,000 Heading For US Pass (Video)</a>.

Already yesterday, Mr. Trump had stated: “The United States has strongly informed the President of Honduras that if the large Caravan of people heading to the U.S. is not stopped and brought back to Honduras, no more money or aid will be given to Honduras, effective immediately!”

The Honduran government, knowing that it risked losing $181 million in annual aid, in response urged its citizens not to join the caravan, which it said was an “irregular mobilization” designed to foment instability in Central America.

Honduran president Juan Orlando Hernandez will today speak to his Guatemalan counterpart and discuss to see what the two can do, although lawyers state this since migration is not a crime and the caravan was already in Guatemala, his hands are clearly tied.

Illegal immigration should be treated as a Felony with 10 years probation the 1st time caught and detained.

If caught again during the probation. period, then send to Commercially self supporting prisons.