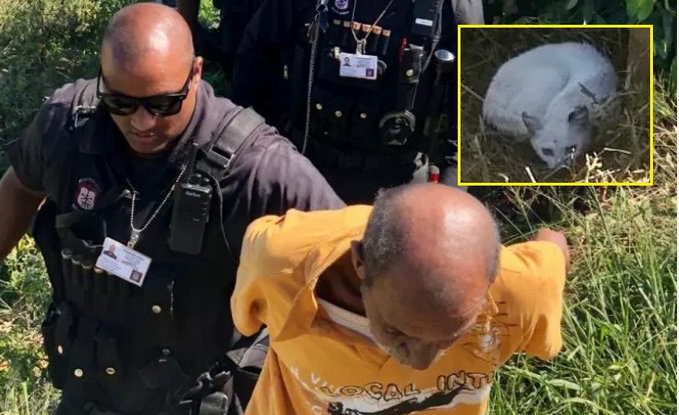 Serial Pet Rapist Caught Having Sex With His Neighbor's Cat

People in the KwaZulu-Natal province in South Africa have been reporting a man has been raping cats and dogs in Buffelsdrai. The serial rapist was finally caught when a woman called emergency services to report she heard her pet cat screaming in distress. When she followed the cries to a property next door and went into the home, she found a naked man having sex with her cat from behind.

The cat's owner told authorities the man had a hold of her cats' rear legs and was having sex. He even refused to stop once he knew he had been discovered. The Reaction Unit South Africa team responded to the call and found the man undressed. The man was arrested when they noticed his nearby pants were covered in cat hair.

Prem Balrman of the Reaction Unit South Africa team said, "I took the call and went out myself and went to the house and found the door locked so I put it in and went inside. To my total shock, I found a man indeed raping a cat. He was naked. I told him to get dressed and the cat ran off. There was cat fur all over his pants."

Balrman continued, "He told me was just playing with the cat then admitted he had raped it. Neighbors told me he had been caught raping cats and dogs before but his girlfriend always begged them not to report him but I was having none of it."

The Reaction Unit South Africa team handed the serial animal rapist to South African Police. "I called the police and am pushing for him to be charged with raping that cat," Balrman said. "I found the cat in the garden and it was very traumatized after what happened. The SPCA are treating it, and we handed the man over to the police."

The poor cat was the latest and hopefully the last victim of the rapist and suffered internal injuries. The cat was handed over to the Society for Prevention of Cruelty to Animals by Balrman for medical treatment.

Related coverage: <a href="https://thegoldwater.com/news/32631-India-What-Pregnant-Goat-Dies-After-Being-Gang-Raped-By-8-Men">India What? - Pregnant Goat Dies After Being Gang-Raped By 8 Men</a>

The disgusting rapist's girlfriend was able to convince locals not to report her boyfriend's sexual depravities to the police. Reports of bestiality are unfortunately common everywhere from Europe to Africa and America. A man recently raped a dying beaver in Washington state in the U.S.

In India, a pregnant goat died after suffering injuries that were the result of being raped repeatedly by eight men. The 7-year-old goat died a day after the gang rape, but fortunately, the goat's owner witnessed the crime and assisted local authorities in apprehending the guilty men.

I`d be all for a bill enacted into law that offers penalties up to death for such disgusting perversions.

Just think… If these sickos pass on such behavior to children they come into contact with. Just an if…

He sure had influence over his girlfriend acceptance of such behavior.

Think about it if such perversion could cause one to rape animals, well what would stop them from raping anything or anyone they thought could be overpowered?

Deviants such as these need to be culled from society.

He had a girlfriemd too :o