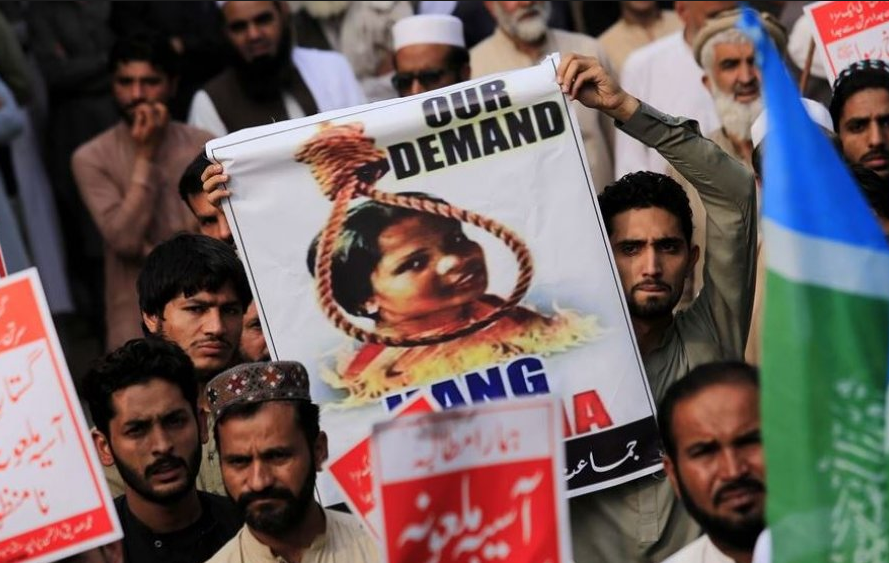 Tensions continue to mount in the nation of Pakistan now that the government of PM Imran Khan has made a deal with the hardline Islamist Extremists (who ultimately want to hang Ms Asia Bibi) not to let the Christian family of Ms Bibi leave the country.

Although the Pakistani Supreme Court last week acquitted the Christian woman from blasphemy (a dispute with her Islamic neighbors led to the accusation), the government decided it would listen to the violent street protest and forbade the family from leaving the country.

Ms Bibi was arrested in June 2009 after her neighbors complained that she had made derogatory remarks about Islam's Prophet Muhammad. She was sentenced to death under the country's blasphemy laws only a year later. On October 8 of this year, Pakistan's Supreme Court reversed the verdict in what was her final appeal against her death sentence.

The Islamists are angry about the verdict and have called on all Muslims in the country to kill both the family members of Ms Bibi, the judges of the Supreme Court and her lawyer (who has since fled to Europe).

The hard-line Tehreek-e-Labbaik (TLP) party took to the streets and violently blocked the roads towards all major cities, forcing the government of first time Prime Minister Imran Khan, a former cricket star, to strike a deal to end the protest. The government will now allow a judicial review for the acquittal and will take measures to ban Ms Bibi from traveling abroad.

Mr Masih said in a video recorded by the British Pakistani Christian Association: "I am requesting the president of the United States, Donald Trump, to help us exit from Pakistan."

In an interview with European press, Mr Masih said he feared the Islamists would soon find them and kill them: "The agreement has sent a shiver down my spine. My family is frightened, my relatives are frightened and my friends are also frightened. This agreement should never have been struck. The three judges delivered the verdict after taking into account all aspects of the case, analyzing all factors, studying the contradictions and basing everything on facts."

"The current situation is very dangerous for us. We have no security and are hiding here and there, frequently changing our location. I think that the clerics will encircle the Supreme Court on the day of the hearing. I really feel very afraid of going on that day. But I think God has been protecting us and he will also continue to protect us. I place all my trust in God."

Whole family on lockdown bc she said something about mohammad the mudslime. Dims wake up!! The types of people you advocate for wholesale relocation of believe this shit. How long will we have freedom of expression and religion if you keep hauling dark age goat rapists from the deserts to your modern cities? We live in a time where masses of “immigrants” need to stay home and rise up against whatever it is that is chasing them away. The problem is their religious leaders eventually become wackos or stop hiding their sinister plans and start killing everyone. Only then do the underlings want a safer place to practice the same shit that got them into the mess they are trying to run from.

This is what the dims want.

Oppression for the masses while they live in a constant state of fear.

I say these bastards want death to us Christians, we give it to them first.

They wage eternal war on all who will not convert, It is long past time we take the fight to them. Christians need not wait & cower in fear but to take up arms to defend & take the fear of God to these heathens.