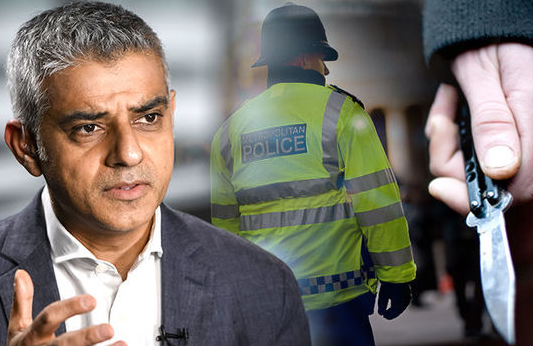 As the London murder total hit 116 (after another 3 youngsters were stabbed to death over the weekend), Mr Piers Morgan, the conservative commentator of Good Morning Britain, invited Mayor Sadiq Khan to explain his policy to solve the bloody knife crime epidemic that is gripping the British capital.

Leftwing Labour Politician Khan complained about the lack of personnel and went on to say there were three things he’s planning to do to try and eradicate the terrible crime in England’s capital city: “I share the fair concern and anger you’re talking about,” Mr Khan conceded. “And there are three things we’re going to do. One, we set up earlier this year a violent crime task force.”

“There are 150 officers - no knife carriers - in parts of London,” the Mayor continued. “We’ve made more than 1,500 arrests, taken weapons off our streets including guns and offensive weapons. But making progress has taken officers, and we’re reprioritising. The second piece of work we’re doing…” Khan went on, but was then shut down by the presenter.

Co-Presenter Ms Susanna Reid got quite emotional during the interview as the latest figures show that teenagers are stabbing people in broad daylight now: “Can I interrupt,” she called out. “Knife crime has surged in the UK and London, and I can’t talk about it without getting upset.

“What do parents say to their teenage sons about travelling on the tube, going out to buy chicken, going to Clapham Common in the afternoon after school? You can’t say that they’re safe, as the Mayor of London.”

Ms Reid’s voice continued to break but she fought on to interview the London Mayor. She has young children going to school in the area where the latest stabbings occurred. “Friday night a 17-year-old was stabbed in South London,” she stated, “you know, my kids were out on Clapham Common that afternoon. I can’t talk about a task force and things are being done to my children - when teenagers cannot go out!”

<blockquote class="twitter-tweet" data-lang="en"><p lang="en" dir="ltr">There have been at least 116 violent deaths in London so far this year - and in the last five days, four people have been stabbed to death.<br><br>Sadiq Khan says we need to be ‘tough in enforcement’, &#39;invest in preventative services’ and give young people ‘constructive things to do’. <a href="https://t.co/VpCmSPRrVP">pic.twitter.com/VpCmSPRrVP</a></p>&mdash; Good Morning Britain (@GMB) <a href="https://twitter.com/GMB/status/1059350469527724034?ref_src=twsrc%5Etfw">November 5, 2018</a></blockquote>

Mr Piers Morgan, who also has children growing up in London slammed the mayor and said: “Every parent who walks around London now is frightened. Your Twitter feed has been full of keeping London safe as Mayor. But now people are being stabbed on an almost daily basis in this city.”

The London Mayor claimed in his defense that even children in primary schools have now started carrying knives and to make 'significant progress' fighting the scourge 'can take up to 10 years'.

Later during the program, Mr Morgan claimed he was disappointed every time the London Mayor appeared on the ITV programme it was to discuss knife crime, calling it both “boring” and “tragic”.

If your Muslim yes it will take 10 years.

That is about how long it will take to adopt Islamic Criminal Law and punishment. After that hands and heads will roll.

With kahn’s arrogant muslim ass, of course 10 years to do nothing.

Until muslims are the majority.

Then sharia will be the law, so they may openly kill any who are not devoted to this religion. A religion based on killing Christians. Killing & maiming their own is also condoned, so that all know how devout they must be. A religion of complete intolerance of all.

It is high time Christians rise & wipe this evil off the face of the world. As well as demon & devil worshipers. In essence, predatory people(s) need to be dealt with in such ways as to render them unable to harm anyone but themselves.

what did they expect when they imported millions of savages into their clean, safe white country?