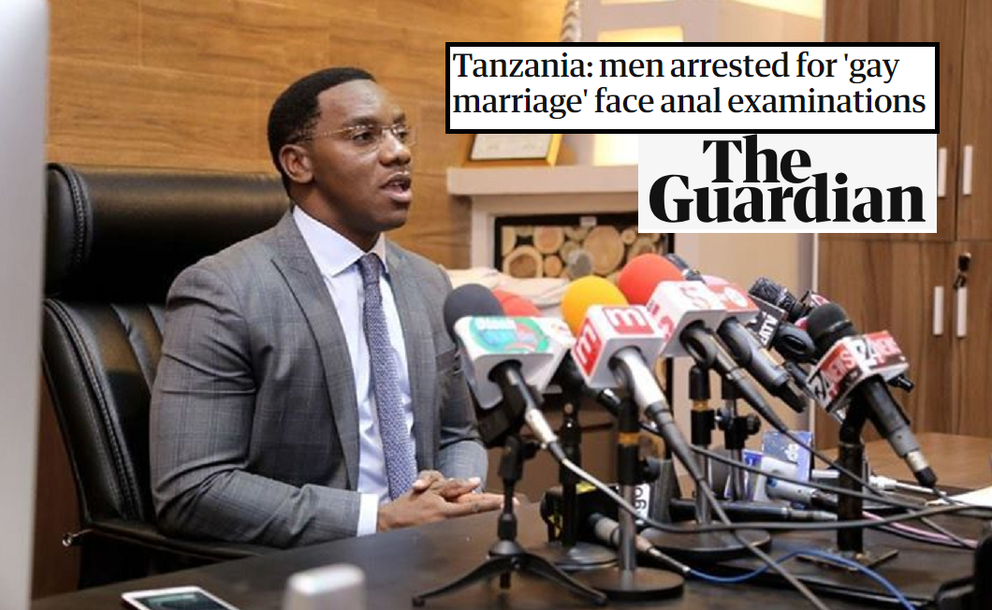 Very little information is being published about the Tanzanian manhunt of homosexuals. The last incident known to the public took place during a wedding last weekend (see our related coverage).

On the beaches of the island of Zanzibar homosexuals can usually walk without risk. But when it turned out that two bridegrooms were about to get married, someone tipped off the police.

Ten people were arrested during the invasion, reported human rights organization Amnesty International on Wednesday. In the country, homosexuals can get 30 years in prison. Six other attendees managed to flee.

The incident is exactly what Paul Makonda (pictured), governor of Dar es Salaam, the largest city in Tanzania, had in mind when he announced the manhunt of homosexuals last week. "Give me their names and we go after the gay men," he said.

On images, you can see how he riles up people to get into action. He is said to have received more than five thousand messages.

Sometimes people were linked because they would walk in a certain way. 'But that can also be a style', Mr Makonda says to Tanzanian TV viewers. In more serious cases it concerned parents who told on their own children.

The event is not unique in homophobic Tanzania (and for that matter, most of Southern Africa). Many gays have not dared to go outside since last week, for fear of being attacked and arrested on the streets. Only on Monday did the Tanzanian government distance itself from Makonda's statements.

Tanzania has been under pressure for some time because of its human rights violations, which are related to the conservative line of President John Pombe Magufuli. Last year he compared homosexuals with cows. With the general concerns about human rights as a reason, Dutch diplomat Roeland van de Geer left the country on Friday. He was the Dutch envoy for the European Union.

Local media reported that Van de Geer was asked by the government of the East African country to leave. Another reading states that he has been recalled by his employer for consultation.

In 2015, when President Magufuli was still at the start of his reign, he scored almost one hundred percent in opinion polls. The Tanzanians and many neighbouring countries saw in him a fighter of corruption and maladministration.

Magufuli has taken robust measures over the past three years, not resembling the policies of all his predecessors. He strongly challenged foreign mining companies that operated under conditions that were unfavourable for Tanzania. The company Barrick Gold was ordered to give back millions of extra dollars.

Magufuli's dictatorial traits are becoming increasingly visible. After government bullying against Mr Tunu Lissu, the prominent opposition politician was shot in his car. Other politicians went behind bars after criticism of the president and numerous independent journalists and artists are under attack.

Citizens' groups, judges and churches also get the same treatment when they speak out against the authoritarian president.

In a climate of moral crusade, Magufuli explains the people's right-wing ideas about social behavior.

He, for example, ordered the immediate removal of pregnant students from school.

In a recent opinion poll, however, only half of the Tanzanians were still able to support Magufuli.

Canada and Europe are now considering to withdraw their economic aid to the poor African country.

Last line in article 'Canada and Europe are now considering to withdraw their economic aid to the poor African country.' That.. this is what get's their ire? lol.. anywho.. I hope they're not intending for this to be some kind of humiliating punishment because, well, you know…

Canada and Europe: Tanzania's plethora of issues and challenges facing them in entirety…no response. Objection tof male-on-male butt sex, "This is an outrage!" Europe is lost, and no longer an Ally (let's rethink WHO our allies are, and could be), and Canada is a "B-team" Western Country.

Reading that headline made me think of something from the movie saw as a new form of compliance with the laws. A form of butt plug that worked like an ankle monitor except that if the fag violated the rules blades would jut out from all sides. It could also just fill with air but the homos would prolly like that.

They also eat Albino Africans because it is 'good magic'.

Any comment on this from the LGBT lobby? These are the people we're importing, you know….

I needed a good laugh today amidst all the bad & crazy news.

If they enjoy the probe or if they fight it off with all their strength.

I suppose that will answer the question eh? slip ~N~ slide, or exit only lolz.

So Tanzania has decided not to bankrupt the country by treating the various homo diseases and social problems. How dare they! Globo homo must be appeased or Moloch will be angered. Right Schlomo?