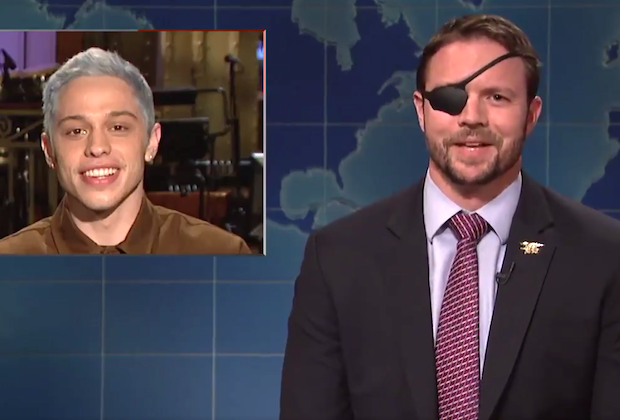 Pete Davidson has apologized for making fun of wounded veteran and, at the time, Congressional candidate Pete Crenshaw. Davidson was on SNL's Weekend Update again as he explained how hard it had been on his mother with him in the spotlight related to this. "Can you imagine being Pete Davidson's mom when everyone's mad at your son… and roommate."

Pete then went on to apologize: "I mean this from the bottom of my heart, it was a poor choice of words. The man is a war hero and deserves all the respect in the world and if any good came from this maybe it was that the right and the left finally agreed on one thing: that I'm a dick."

At which point, surprise guest Lt. Com. Dan Crenshaw himself (now Congressman-elect) shows up with, "Ya think."

"Thank you so much for coming," Pete tells him. "Thanks for making a Republican look good," Crenshaw responds. "You gotta stop saying that man, you been saying it all day, please…"

Davidson then goes into an explanation of how he lost his eye due to an IED in combat during his third tour of combat duty. During this explanation, Dan's phone goes off and he lets the Ariana Grande ringtone play through purportedly so it can go to voicemail. He then looks at Davidson and asks "What do you know her," to which Pete responds, "Ok, that hurt."

Pete actually announced that he and Grande had broken up during the same segment where he lambasted appearances of several people running for election in the Midterms.

Davidson then gives Congressman-Elect Crenshaw a chance to "get him back." Crenshaw at first seems reluctant and then fires off with how Pete looks like "if the meth from Breaking Bad was a person. He looks like a Troll doll with a tapeworm. He looks like Martin Short in the Santa Clause 3 (by the way one of these people was actually good on SNL)."

After this, Crenshaw switches to a serious note saying that the whole thing can be a learning experience, "Americans can forgive one another. We can remember what brings us together as a country." Crenshaw also encourages the viewers to remember it's Veteran's Day weekend, connect with a veteran and thank them for their service and tell them, "never forget" as a sign they're connected together as grateful Americans.

I'm personally glad to see this. I felt SNL and Davidson needed to do something. Crenshaw had previously suggested SNL at least offer a donation to some charity that supports veterans such as the Disabled American Veterans (DAV). He had told CNN he certainly didn't "demand" an apology but thought he probably should apologize in addition to making some donations to veteran non-profits.

In the first he had taken shots at several running based on their appearance in a segment called "First Impressions" on Weekend Update. I honestly think the insult to Crenshaw was much less hurtful than others, if disrespectful. "This guy's kind of cool, Dan Crenshaw," Davidson began at which point Weekend Update's Michael Che looks down, laughing, "Aww come on man…"

"Hold on," Pete urges. "You might be surprised that he's a Congressional candidate from Texas and not a hitman from a porno movie. He lost his eye in a war or whatever." Definitely not exceptionally respectful, but all told, not really as disrespectful nor as mean-spirited as some of his other quips on candidates. After tossing barbs at Andrew Cuomo ("so I don't look biased"), Greg Pence and others, he admits "don't get me wrong, I'm not insane, I shouldn't be making fun of the way anyone looks: I look like I make vape juice in the bathtub. I look like a Dr. Seuss character went to prison."

Let us understand this….

He is LIBERAL and ANTI-MILITARY and runs his mouth. Infects MILLIONS of snowflakes, violates PC protocol a dozen ways, conducts himself in a manner that would get ANY Pro-American / Pro-Military Conservative hung out to dry and their Media contracts voided. Have ANTI-FA visiting their homes and Radical and Hollywood threatening their families and children. He get a very light sample of a Moral Majority backlash, So he issues an quick apology and he gets to walk free and has Liberal Sainthood applied.

How about the same forgiveness for Ms. Barr?